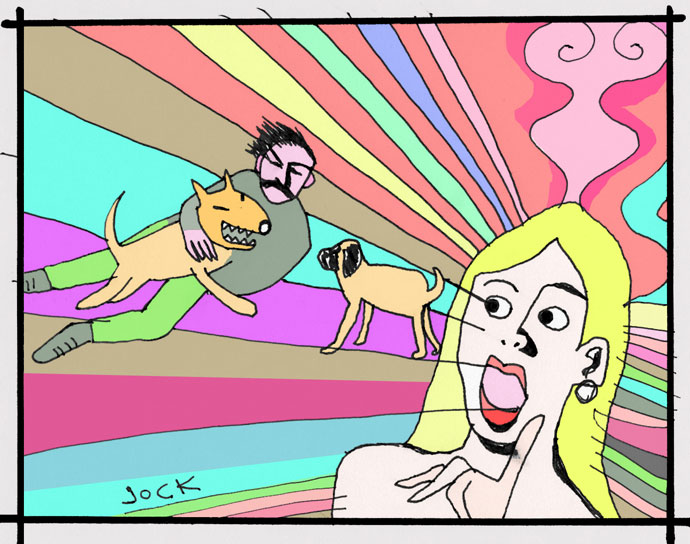 eHarmony doles out its matches slowly and with the painful scarcity of an anorexic’s tedious allowance of calories. Where most dating websites instantly match you with hundreds to thousands of singles, and not only lets you gorge on men from all over the world but also select one by height, race, socio-economic standing or eye color, eHarmony only matches you with somewhere between one to six men a day, with no search option, and as far as I could tell not one of these men met any of the “preferences” I had requested when I signed up.

In spite of being populated with matches I had absolutely no interest in, eHarmony felt safer than other dating websites. Profiles feature real names (not a weird screen name), all the pictures are clearly of faces (not wieners), and the vast majority of profiles featured men with stable jobs.

Yet I was disinterested, and even if I found someone I felt a connection with I wasn’t able to directly message them. eHarmony makes you jump through hoops before you can talk to anyone. First you exchange pre-written multiple choice questions, then pre-written open-ended questions, after which you share a list of pre-written “must haves” and “can’t stands.” After that, you can finally message each other––but only after you read through a list of warnings and helpful dating tips like––“keep the first date to an hour and the first phone call to fifteen minutes,” “use your best judgment,” and “limit expectations.” It’s nice to hear reminders to keep my already low expectations as low as they can be.

eHarmony also advises you perform a background check and confirm the identity of your perfect date; they even offer a pre-written message for you to send to your date thanking them for confirming that they are a real person and not some scammer or murderer. I wish they had a more direct and lurid option, something like “Thanks for confirming that you are real, I feel better about meeting up. Well not totally. Still not completely convinced you aren’t going to steal my credit card number to rack up charges on fetish sites.”

After performing eHarmony’s dance for dates, I was filled with anticipation to meet up with Paul. It was no wonder; eHarmony’s stingy behavior had left me feeling ostracized and out of practice.

I ran Paul’s profile past my friends, and they agreed that it was filled with gold stars. No kids. Never married. Homeowner. Veteran. Grad student at a good college. Six pack. Dog owner.

We arranged to meet up at a local dog park and coffee shop.

I figured my dog, Brodie, would be a wonderful first date wingman, or wing-canine. If the conversation took a down turn I could always steer it towards what dumb/strange/cute thing my dog did that day or what dumb/strange/disgusting thing he ate today.

Brodie has what I like to call “questionable eating habits” by that I mean he will eat anything and everything with a noticeable preference for paper, fabric, and anything that smells especially human. His eating habits are so bad that if he were not the cutest puggle I have ever met and for my desperate and adoring love for him, I probably would have killed him when he found my personal massager and destroyed it––effectively ending the only stable relationship I had at the time.

I didn’t know, and still have no idea, what he ate before we went to the dog park. All I know is that in mid-conversation with Paul I saw Brodie dragging his ass around the park. I had no choice but to grab a baggie and help my best friend out. And there is no ladylike way to pull something out of a dog’s ass.

I was visibly disturbed, but Paul didn’t seem to mind at all. He kept the conversation going and was friendly as ever––unmoved even by the fact that Brodie kept humping his dog’s face right in our midst.

I take it back. My dog is a horrible wingman.

I started feeling uncomfortable when a large, un-neutered dog started roughhousing in the park like a drunken frat boy at Woodstock ‘99. Frat boy Fido had started a number of fights before he stumbled (I swear this dog stumbled) over to where Paul and I were sitting. And in the anticipated behavior of two bitches, Brodie and I both became very protective over each other. I tried to call Fido’s owner over and “kindly” ask them to keep him away from my dog; after all I was still traumatized from the time Brodie was bitten last summer (by a dog much smaller than Fido) and Brodie––all 20 pounds of him––decided to snap at this ham-fisted, violent dog at least six times his size.

I screamed as Fido lunged at my dog––then Paul jumped in. He tackled this huge frat boy Fido turned clumsy Cujo before he could wrap his jaws around my baby.

After almost seeing my dog almost become someone’s McBitch sandwich I just wanted to go home. I thanked Paul dearly for saving Brodie, made plans to see him again soon, and said good-bye. Even though we had little in common and I didn’t feel any sparks, I was sure that with someone as kind, genuine, and smart as him, it was only a matter of time before feelings emerged. After all, he saved my dog.