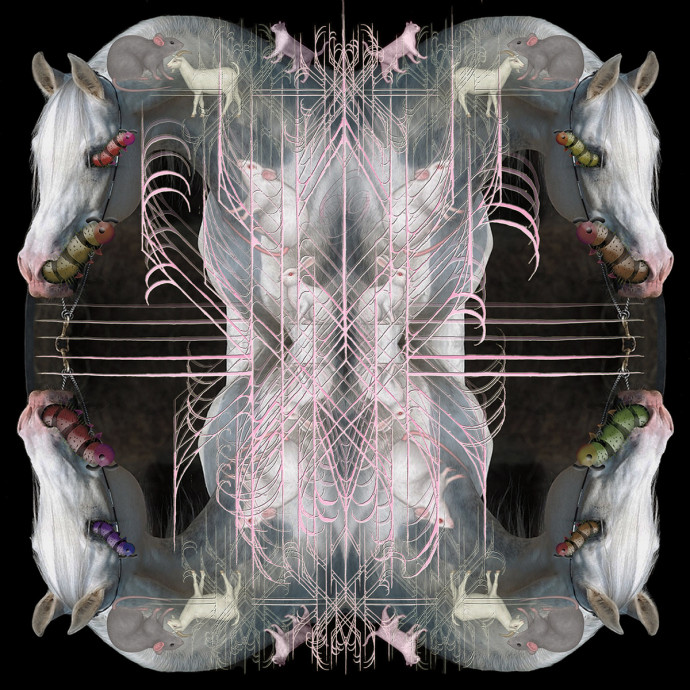 If it weren’t for genetic mutations we’d all still be living in the water. So embrace that radiation. Embrace food pollution. Repeated exposure to touch screens might one day turn our babies into superhumans—you heard it here first. And in the absence of Adderall, I’d like to suggest that a disorienting amount of alcohol followed by a swift pot of coffee can work wonders for your imagination. Again you’re hearing it here first, and already this article has justified its steep price of admission and we haven’t even gotten to the music yet..

This month’s lesson is that all your heroes will eventually let you down. And in some ways that’s beautiful because it allows fresh ideas to enter the arena, or it would be if the industry didn’t insist on propping up veterans who haven’t had an interesting idea in over a decade. Oh well. In a vast sea of unrecognizability, where instant access to everything has turned music consumers into panicked toddlers lost in the shopping mall, I guess some people still find comfort in a familiar face.

As always, albums are graded on the non-sliding scale I pioneered over at Collapse Board. Judgements are fixed in rigidity because nuance is for nincompoops and who has time for shade when we’re all living in a treeless desert. You can catch up on previous installments over there: June, July, August, September. It’s not always this negative around here, and next month is looking better already.

Album of the Month:

Eartheater is the work of Alexandra Drewchin, and there’s nothing out there quite like it. People make comparisons, but this is closer to Coco Rosie than Cat Power and more Jodorowsky than anything else. Psychedelically meditative—the music isn’t made up of chord changes so much as slow tonal shifts—it’s the sound of personal evolution and makes a perfect soundtrack for this coming winter, with its exposing of psychic bones and all the attendant shaking that involves.

Misplaced Hype of the  Month:

The first time I heard Ys and The Milk-eyed Mender, I don’t think I was able to breathe until the albums were over. So assertions that this one gets better the more you listen to it seems more like wishful thinking on the part of her fans than a sign of the album’s quality. And while I’m happy for Joanna Newsom the person—Ys  remains as harrowing a listen as you’re going to be find, a treatise on dissolution and loss that bleeds so hard you wouldn’t want anyone to experience what must have gone into it—Joanna Newsom the artist is in serious trouble. The arrangements/songs/lyrics are a cluttered mess, busy for the sake of busy-ness, like Newsom thinks if she keeps throwing ideas at the wall something will stick. All the songs plod along at the same tempo. It’s—

Jesus. I can’t begin to talk about how disappointed I am in this record. I’d been hoping Have One On Me was an anomaly, and that the ensuing silence meant Newsom was working towards a breakthrough. Instead we get a slip into even more mellowness. Divers is the one thing I never thought a Joanna Newsom record could be—boring. Pristine & porcelain with nothing to say, when I compared her early work to Astral Weeks, I had no idea how apt the Van Morrison comparisons were going to get—the same slide from unflinching power to self-satisfied homiies. This record’s as sweet as Tupelo Honey and every bit as empty.

‘Snug Slacks’ sounds like Ween and I’m not sure how I feel about this. Or maybe it sounds like Midnight Vultures era Beck. Actually, it sounds like Flight of the Conchords. Pale Green Ghosts ripped me apart with its sadness and black humor and made my black sadness at the time almost bearable. This one just makes me sad. For the first verse of ‘Voodoo Soup,’ I start to think maybe this album isn’t that bad, that I’m just being a crank, but then the chorus kicks in and we’re back in Ween-land again—everything tongue in cheek & hysterically pseudo-funky, with flat jokes that are supposed to be funny b/c he knows they’re flat—and I’m on to the next song. ‘Global Warming’ is okay, I guess. But the stately pace and churchlike melodies of his best work feel overly familiar by now. Self-consciousness makes shitheads of us all, and I can’t help but think that JG finds himself trapped in the prison that gets all successful artists eventually—keep doing the thing you do well and become obvious and formulaic, or try something different and end up looking stupid. It turns out JG does one thing well: dark humor at a glacial pace, and he did it better on his last album. I still like him—a lot. I just don’t like this.

As in desert ghosts—the night desert of animal phantoms and unfamiliar screams. This carries the same dark mystery as The Conet Project only this sounds more like personal desperation than geopolitical chess.

For a band who seemed to finally be getting somewhere on their last album—at last a reason for existence beyond the depth and awesomeness of their (admittedly awesome) record collection, this represents a giant sighing step backward. And ‘Snakeskin’ sounds like Mungo Jerry in the summertime bullshit. Mellow mold.

Much like last year’s Parquet Courts, Beach House’s unofficial album has twice the personality of their official release, and yeah I know two times zero still equals zero, but bear with me here. This record feels free, like the people involved actually enjoy making music as opposed to their normal tedious attempts to—I don’t know—consolidate a position within the marketplace or something. It’s worth remembering from time to time that all this music we’re talking about is rooted in rock&roll, the big bang from which everything spirals outward, and as such should at least have a degree of rebellion/freedom/iconoclasm/spontaneity. And Thank Your Lucky Stars serves as a reminder that some of this shit is supposed to be, at least some of the time, fun. A source of release. Concepts that of course should always be defined as broadly as possible.

As someone who went to college when the millennium was doing its odometer-rollover thing, this album presses all kinds of nostalgic mixtape-making buttons in me—romance, anticipation, the excitement of not knowing where you’re going, that kind of thing. I suppose every generation gets the Kleenex Girl Wonder that they deserve and who am I to deprive anyone of that necessary joy.

Gun Outfit – Dream All Over (Paradise of Bachelors)

The first song goes places and is over way too soon; the rest of the album goes nowhere and lasts an eternity.

It’s good for the first thirty seconds, background calliopes & showering stars, then it dissolves into ‘Annie,’ a reggae song so poorly done that UB40 would vomit, and the album never really recovers. ‘The Glitzy Hive’ is New Edition w/o the melody. This records is complete bullshit and anyone who owns it is either an asshole or stupid or both. Adjust your online dating profiles accordingly.

Majical Cloudz – Are You Alone? (Matador)

Reflective to the point of slowly sinking into the lake and drowning in its sleep. But as long as we’re here, let’s give Magical Cloudz credit for one thing: if you’re going to misspell one word in your band’s name, you have to misspell both (see Zeppelin, Led; Leppard, Def; Kross, Redd; ), otherwise you’re just Froot Loops. Anyway, this is Coldplay-lite, which means Coldplay for people who think they’re too cool to be seen liking Coldplay in public. And if you’re someone who thinks listening to Coldplay-lite is cool b/c it’s not cool to listen to Coldplay then now might be a good time to do some volunteer work in your community, or maybe read some Eduardo Galeano or something, i.e. you could use some perspective. I mean, even Coldplay wouldn’t try to pull off a line as banal and Popeye-influenced as ‘I am what I am / You’ve gotta learn to love me,’ would they?

If rock music was still a thing that existed in the world as a social force, then Protomartyr would be playing Woodstock or something. I’d like them a little bit more if the singer didn’t sound like the guy from Spoon (which reminds me of that King Krule record a couple years back where that singer also sounded like the guy from Spoon). In the press photo every band member’s hand is jammed in their pants pockets except for the one guy who’s holding a cigarette (his free hand is still pocket-jammed), which is exactly what this record sounds like.

That island they’re talking about is the UK and their concerns run deeper than that country’s shitty overpriced coffee and artery-clogging breakfasts. Essentially a concept album about Cameron’s Britain as seen from the north (Huddersfield, to be exact), Foam Island combines documentary-like interviews w/more or less straightforward electronics—the r&b maneuvers fall particularly flat, like a less funky Gotye if you can imagine such a thing. But half the album burns brightly, and ‘Days Burn Blue’ is a stunner.

Essential compilation of mid-late 70’s NYC independent label that put out Television, dB’s, Alex Chilton, and others. More power-pop than punk, more new wave than no wave, this nevertheless overflows with abandonment & strangeness & life and is nothing short of essential.

The scouring of Adrian Sherwood’s vaults continues and apparently the barrel’s a long way from being scraped. This will rearrange your saturday and clear out those mental decks.

I wasn’t kidding. This makes two Sherwood comps in one month, and this one might be even better. At the very least it’s more sonically extreme. Annie Anxiety from Crass sings ‘Gentle Killers’ as if her life depended on it—which is to say, barely above a whisper.

The singer for Strawberry Switchblade, a band who sounded exactly like their name, went solo and so goes the sweetest suicide. Debbie Gibson in hell, drowning in an avalanche of Jolly Ranchers. It’s the drum machine, turned up to JAMC levels circa Automatic, that give the record its kick. It’s when the weirdos try to act normal that things get really weird.

80’s Australian synth-punk, almost industrial in its scuzzed out negativity. Messiness is always a virtue (not a vulture) when it comes to this kind of noise, otherwise you end up sounding like early NIN. As such, ‘God Is My Biro’ would be even better if you dropped the ‘i’ in the title’s last word. The singer sounds like they’re trapped in a cave similar to the one Peter Murphy was in, except the cave paintings are way cooler.

Belgian 1970’s obscurity born out of anarchic collectivism. The songs have titles like ‘The Third Untitled Track’ but they’re all presented out of sequence and there’s no ‘The First Untitled Track,’ a conceit that you’d have to be a dull-thumping curmudgeon not to appreciate. Anyway, this is cosmic (or kosmic) explorations of the highest degree, free and searching and expansive in ways that feel kind of alien to 21st century life as viewed through a screen, which gives this record great catalyst-potential for turning the corner on this mess.