PRO(M)BOIS(E): An Interview with Thibault Raoult 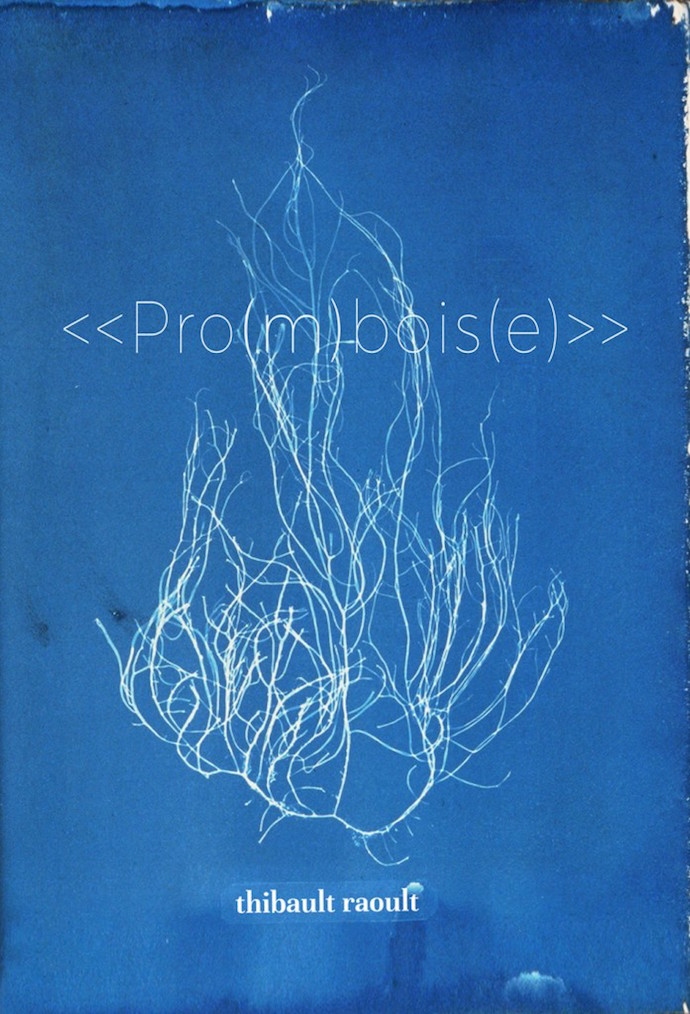 Paul Cunningham and Thibault Raoult got together over email to discuss the creation of Raoult’s,  <<Pro(m)bois(e)>> (Opo Books & Objects, 2016).

Paul Cunningham: Your book begins with an answer to the question most people probably ask when they pick it up for the first time: “A: rhymes with FRAMBOISE.” What can you tell us about the title of this collection? Does the “Pro(m)-” of the title have something to do with PROM (i.e. programmable read-only memory)? Or could someone possibly mispronounce “framboise” to sound like something more akin to “from Boise”?

Thibault Raoult: First and foremost at play in my third book’s title (to my mind) is the sonic coupling of a variation on framboise (French for raspberry) with the syllable Pro, which ostensibly stands in for a defective or defecting cousin and/or mirror-image of Prometheus.

I also wanted something thoroughly bi-lingual, if bordering on nonsense—something that could nonetheless be distilled down to what is only slightly more fun than programmable read-only memory (which hadn’t crossed my mind or heart until now), namely that alienating ritual: prom.

Of course your technological line of inquiry does have traction in the work, I’d like (or love) to think. The book is certainly read-only in one sense; in still another I view it as an opera (but not a libretto), i.e. sing-only.

Someone, perhaps you, could mis- or simply pronounce the title all kinds of ways. But, yes, I wanted to have an echo of Boise in the title for sure, not so much to ground the text but to ground me as I sought to disrupt the narrative, which is only there in the slightest to begin with.

Are you, Thibault Raoult, the (M)(E) of this book? Or is that (M)(E) me—the reader—searching for someone or something to identify with?

Lyn Hejinian—writing about her book Saga/Circus—speaks of her desire or need to write through her characters. (I came across Saga a few years into Prom’s making.) For fiction writers I suppose this might not be much of a revelation, but it’s shattering for poets to encounter/attempt. All this to say that, sure, I desire a version or all of me in the narrative fabric/structure.

But equally readers might themselves constitute the personal pronoun, (m)(e). As Pro(m)bois(e) was first shaping up, so many poets were disparaging the “I.” While I understood many of their motives for doing so, I thought, what about the “me”? Why not dispute, disrupt, and disengage the me as well; the parentheses move in that direction.

Finally, as with most texts, but this one in particular, the book is nothing without you/me.

I feel the writing demands careful attention (“der / some / thun”). There’s an exciting yet confounding deliberateness to it. Do you view the earliest pages of <<Pro(m)bois(e)>> as a way of cuing the reader how to read the rest of the book?

I do. One [re]arrangement of pages 2-5 is “some dialogic thunder to have on,” by which the book could be alluding to a TV channel—one devoted perhaps to a now-defunct Attic Greek tragicomedy.

Pro, Etna, Echo—are these characters or devices? I don’t always think of them as bodies with, like, limbs and stuff. Sometimes I do, but most of the time they feel closer to materials. Non-human beings, but with human-like familiarities. Things that can still guess or correct or supply. Like computers. Were you attentive to different forms or bodies as you compiled these voices and locations and moods? Or, rather, modes?

While I don’t necessarily provide access to clear visuals for/of these characters’ bodies, I wrote the book with their bodies in mind. The image of Lotte riding Sandy The Bison Lovebird across a warm plain, for instance, is central and recurrent, and facilitates or offsets passages where absolute semantic meaning is absent. Your sense/sensing of material, your material feeling, is probably more important still. I wanted to set up a material environment, which includes bodies at times, and let it loop. I should add, too, that as much as the layout of the work matters to me (ruins me/(m)(e)-as-ruins), «Pro(m)bois(e)» has a life on the stage (and not much of a life off it). What I mean is when I read as or about Sandy I use a husky, plains-mammal sorta voice. I add or give or restore body in the staging.

But—to go back on my word—all these folks are mere devices helping me to instantiate a Poetics.

The morphological legerdemain of <<Pro(m)bois(e)>> is what I truly admire. I think what poet Abraham Smith said about this book is extremely accurate: “[…] the next time I drown, I’ll be secreting this book in a backpocket: rare and saving buoy.” The description immediately brings to mind my favorite presence in the book: Pro. Pro is yarn-like and skein-y; pink with slush, stacked with suns; something closer to a liquid; a puddle; something unstable. Could you talk about the inspiration for Pro or some of these other, uhh, subjects?

Tomorrow, tomorrow! There’s always . . . Sorry, your use of legerdemain got me going in a different direction for a sec.

To answer one part of your question: in 2002 I wrote a poem called “The Prometheus Thing,” which was essentially a monologue by Prometheus about his experience chained up “because of his role in F=I=R=E.” A year later, walking around Brooklyn I came across (as one does) a flyer stapled to a telephone pole. The little perforated slips at the bottom displayed a phone number and then the phrase “Ask for Sandy.” Lastly in Paris I found a postcard of Lotte Lenya clutching a man on the set of a movie. My cinemyth took off from these disparate texts and visuals, by turns sustained and disrupted by the unstable psychosomatic whirlwinds I was experiencing and continued to experience when I first saw Lotte, asked for Sandy, and projected myself as Pro(metheus).

What do you mean by cinemyth?

Cinemyth is the sense of my double deployment of certain screenwriting stylistics and Attic content/context. Inasmuch as there’s a fairly heavy dose of narrative and imagistic splicing in the my text, for sure cinema’s important. Video also plays a part as a lo-fi counterpart. I can visualize (and I hope the text does the same for you) Echo, for instance, bopping around Pro’s head in black-and-white, grainy glory.

Would you mind sharing any films that have deeply affected your poetics?

Etna has TRAFFIC—like a city, like the Internet. Beige-bay has ACTIVITAY—like a newsfeed or perhaps a stream. Of water or data or maybe both! Pro can rewind. 4Winds possesses a number in its own name (i.e. 4). This collection feels underworldly rooted in antiquity yet otherworldly in terms of its sometimes seemingly unidentifiable subjects and environments. It’s simultaneously alienating and uncanny. It makes my brain feel the same way it does when I translate poetry from a different language.

If there’s ever a second edition, I’ll add “alienating and uncanny” on the jacket, or better yet maybe partner up with whatever company makes those lil blow-in magnets that keep people like me from stealing this text and ask nicely to add your phrase to their magnet.

In many ways I’m still processing the text. Is this dubious? Does it not bode well for the potential reader? I can’t say, but the book, as much as it speaks to a private mythology or final vocabulary, is also user-generated. The Greek angle is available but not dominant. The eros is rampant but not pervasive.

But really the in-betweeness you’re feeling (or felt) is what I’m after. I want the book to fall apart, not as a thing, but as an environment. Fall apart like a soggy log crushed underfoot by you the reader, who are Sandy to me. And your legacy—which I’d only be too lucky to call mine as well—is the moss or ‘shroom that grows in your [foot]print.

Was the ghazal form an influence on this work at all?

I wouldn’t say so. Although Anthony Madrid’s baroque lyricism­—at play in his own ghazal-centric oeuvre—was.

Some of the pages of this parietal book contain hieroglyph-like drawings. They remind me of cave drawings. Some of the drawings even disrupt the text itself. What input did you have regarding the visuals? How should we be interpreting them?

Maybe treat ‘em like body tissue, Paul. They’re just there doing their own thing. Or treat ‘em like something floating past you in the ocean, i.e. keep an eye on ‘em, don’t let ‘em get too close, unless of course you want to add ‘em to your ocean-as-mother sauce. Treat them, don’t interpret them. Or think of ‘em of me. Me with nothing to say; and so a glyph in place of a mouthing. A mouth-glitch, in a word. A summary or summery sing-a-along. A dark moment. A roll of the dice. A cave with no wine. A hotline.

I’d add that publisher Johnny Damm’s algae cyanotype cover image choice (and gorgeous layout overall) disrupts the title/text as well. I thought my publisher had my back but then he went and obscured my obscure title! Feel me?

Is this textual node of yours a nod to anyone in particular? Any specific writings or writers that helped to shape this nervy, watery thing of wings and hooves?

Then there’s the painting world, too. If Prom were ever staged, Robert Rauschenberg would be called in to do set design.

What advice would you give someone bold enough to engage with <<Pro(m)bois(e)>>?

Make your own poem out of it? Draw all over Sandy’s body: (h)(e) don’t mind! Support local theater.