Our Spot Forever: A Review of White Girl 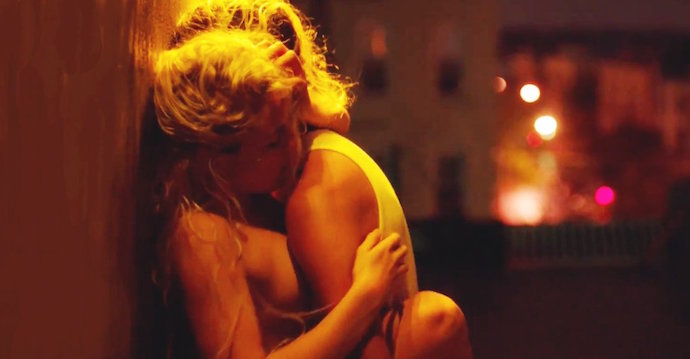 New Year’s Day of 1976 saw the release of L.A. Rebellion alum director’s second feature, Emma Mae, filmed on location in Compton, California. The film tells the story of a young African American woman fresh from Down South as the need to raise bail money for her new boyfriend turns her reputation from wide-eyed country bumpkin to worldly bank robber, only to discover that in the end, all was for naught.

Director Jamaa Fanaka himself came from Jackson, Mississippi to South Los Angeles and saw his film marketed as another Blaxploitation movie, a distributor going so far as to later change the title to Black Sister’s Revenge, its video cover depicting three afro’d black women in halter tops holding guns amidst a backdrop of stills, despite the movie’s focus as more of a character study than say, Pam Grier’s Coffy or Foxy Brown.

In this case, while critics have drawn comparisons between Elizabeth Wood’s debut feature film White Girl and the 2015 German drama Victoria, the former is a kissing cousin to Emma Mae for reasons that go beyond plot. Upon the limited theatrical release of White Girl in the fall came a massive advertising campaign by its distributor FilmRise, the largest and most prominent being Vice Media and its anchor website. “The most explosive portrait of NYC youth since KIDS,” said Vice writer Emily Manning, her quote becoming the title of the review itself and featured on every ad and theatrical poster for the movie. For marketing purposes, this line alone proved to be low hanging fruit, the aforementioned Larry Clark film gaining much column space and content over the last year thanks to its 20 year anniversary. I myself sat behind the director at a screening at the Angelika Theater months earlier amidst a theater packed full of extras and NYC skateboard hangers-on.

While the comparison might have gained more seats in the 38 theaters it played in, especially among the coveted 14-34 age demographic and its target market of urban art house, the comparison is questionable. Cultural critic bell hooks spoke of that film’s troubling racial politics and focus on white male heterosexism. Years later in a LitHub essay “Are the Kids Alright?” Moira Weigel wrote “The problem is that KIDS reproduces the superficiality that makes it so stylistically compelling in its approach to its subject matter.” Returning to my experience at the Angelika, I distinctly remember a large amount of the audience, mainly men, laughing at the scene in which a passing gay couple in Washington Square Park is harassed by skateboarders, including the two protagonists.

The same issue brought up by Weigel could also be said of White Girl. While Wood’s protagonist Leah is 20 years old, past the age of consent, the film’s cinematography and shock value imagery of cocaine use and sex (sometimes in combination) is a looming threat of distraction from any messages about the male gaze, racial disparities in the criminal justice system, or gentrification.

Shortly after meeting corner drug dealer Blue and his friends, Leah convinces her new lover to sell outside of the neighborhood at parties hosted by her sleazy magazine publisher boss, Kelly. Of course, Blue is soon arrested and Leah is left with ten ounces of raw product he had purchased on consignment, which she decides, as the Great White Savior, to sell to raise bail money, myopic of the consequences that come to all, while I found myself predicting what would happen throughout the rest of the film. In addition to cocaine, Blue is also found to be in possession of heroin, although Leah never does any as that would turn this into a much different, harder to market and unsexy film, given the sudden attention on White America’s opioid epidemic.

With that said, there are several aspects of the film that were interesting, first the aesthetics and soundtrack that seem to time warp the viewer back to the late 90s. The lighting, in keeping with its subject matter, goes to the extremes of disorienting brightness to dim and even dimmer, the many night scenes calling to mind the blacklight cinematography of Hype Williams that he showed in his feature debut Belly. The soundtrack also speaks to this era, with tracks from artists such as R. Kelly, Cam’Ron (whose song “White Girls” appropriately plays in the ending credits) and Big Pun. The actor/singer Brian “Sene” Marco has several songs on here and gives a heartbreaking performance as Blue, even if he isn’t given enough screentime. Morgan Saylor, as Leah, is adept at playing the hollow protagonist from wide-eyed smirking to her traumatized bottom. Blue’s crew, all of whom are Boricuans, do their best with the material at hand and represent a diversity not seen in many films. Unfortunately, all of them play drug dealers, the only Puerto Rican woman given screen time (with no dialogue) being an abuela.

If anything, the film almost drowns under its own weight of attempted verisimilitude (the movie filmed on location in the oft-mentioned neighborhood of Ridgewood, Queens on Seneca Avenue) and becomes in itself, an exploitation film, specifically what I would refer to as “gentriploitation,” which can be traced as far back as Hal Ashby’s The Landlord, in 1970, to Jack Gold’s The Chain (1984) and Danny DeVito’s Duplex in 2003. For a movie that name drops NYC graffiti artist Rambo and shows Blue buying loosies (loose cigarettes) at the bodega, less attention is paid to plausibility. The initial scene shows Leah and her roommate moving in, any non-drug dealer neighbors magically absent from the shot. In the following scene, Leah’s friends are visiting. The first words spoken by her white male friend are “I got jumped freshman year.” She doesn’t just move onto Blue’s block uninvited, she appropriates his lifestyle.

The questions of how the neighborhood is represented and who the film is for, along with the revelation In interviews that Wood based the movie on many of her younger journal entries bring into the conversation the dichotomy of myself as a privileged white male first and a resident of Ridgewood. I would say long-term resident but that it itself would be an exaggeration on my part to build any sort of authority I would have in this argument. The latest Census of 2010 showed the median year renters moved in as 2004, in comparison to New York City’s median of 2008. On my block, one that divides the neighborhood in its City Council District, the owner occupancy rate is high and tenants have come to represent a mixed racial demographic of white, Latino and Eastern European. One block east, the neighborhood becomes much more Latino (the same Census showed the zip code as a whole at 40% White and 49% Latino,) its City Councilman, Antonio Reynoso, who represents Bushwick and parts of Williamsburg, a Latino man.

Which brings us back to the question of the Great White Savior, which comes in threes, the first of which is Leah, in her attempt to save Blue, whose incarceration is partially her fault. The second is the lawyer Leah hires, in a move of stunt casting played by Law & Order’s Chris Noth, whose motives are suspect and later confirmed. Finally we see Leah’s magazine publisher boss Kelly, who provides her with a venue to sell coke, despite the modern business model for well over the past decade being a delivery service, where discretion is key.

This film of course, is about a lack of discretion. By the time Leah is shouting at a crowd in a party Kelly sets up for her to raise money, screaming “Everybody do a bump!” to the crowd before snorting a line off his half erect penis, the audience is smacked in the head with an after school special morality and the key violation of “Don’t get high off your own supply” when she wakes up. I had to wonder if scenes such as these, along with Leah often passed out, were added to make the film more marketable, as opposed to a film that was more straightforward about its political subject matter and less so in its morality, or rather, amorality. After all, the cinematic flipside (in every sense of the phrase), 1983’s Risky Business, had the sex on the train scene that was done better in the Abel Ferrara film King of New York seven years later. Every anti-war film has had its coup de grace scene of violence designed to shock and awe.

It would make sense given the history of FilmRise, as one of its properties among media distributed in theaters, television and video on demand, is none other than Troma Films, the original distributors of exploitation and sleaze. On the former’s website under the “Press” section for one of its other recent films, The Greasy Strangler, a review from The Guardian is quoted as:

“A welcome oasis of filth, depravity and shock, [The Greasy Strangler] carries a playfulness that should inspire glorious, “what the f*ck?” huzzahs from the sort of people who wish John Waters would make movies like Desperate Living and Pink Flamingoes again.”

However, Wendy Ide, in the same review also said:

“Like an early John Waters movie but without the sophistication, this aggressively inane horror comedy manages to cram in every disgusting, deviant activity you couldn’t begin to imagine. And yet, it’s still rather boring. … A film with literally no redeeming features.”

Reviewing a film such as this is difficult on several levels. The object of any critic is to argue whether a film or a book is objectively good or bad. But as recent studies have shown, 73% of Rotten Tomatoes film critics are men. Over at the New York Review of Books, 677 male authors and critics were featured in 2014, compared to 242. The male gaze seeps into reviews of work by and featuring women, from David Carr’s obsession with Diablo Cody’s exotic dancer past in his New York Times profile on her in 2007 upon the release of Juno to more subtle, everyday uses of language and the oft-asked-by-men question in literary criticism of “Is this autobiographical?” In this case, Wood nipped this in the bud by publicly stating that the movie was based off journal entries. But even that can leave woman authors and directors vulnerable to the misjudgment of the ownership of personal trauma with narcissism. Most male critics, eager to be known as “nice guys,” would now readily nod their head and echo the sentiment of “the personal is political” if they were in a room full of women, only to turn around and ask their guy friends “Why wasn’t I picked to be on the panel discussion ‘The Lack of Women Directors?’” in the bathroom of the after hours club the next night.

On the other hand, you could say that Wood ducking the charge of writing and directing an exploitation movie by basing it off her own personal journals is akin to Larry Clark ducking the same charge by having a then 19 year old Harmony Korine write the screenplay to KIDS. The stakes are high here and the movie is easy to write off as narcissistic without giving it some thought, given the personality of cokeheads and the focus on Leah instead of Blue in the film. In the end, after the last flash of light, the question of who the film belongs to (the director, the residents of Ridgewood, marketing executives, critics or the audience) is summed up by this exchange between Leah and Blue on her new apartment’s roof:

Blue: “This been our spot forever, yo.”

Leah: “My roof has been your spot? Well it’s my roof now.”