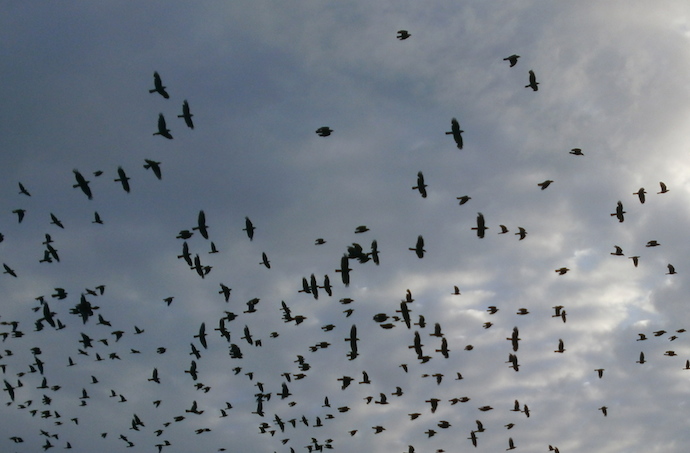 The crows want something from me. One looks through the kitchen window. I imagine it is looking at me though in all probability, it is looking at the yard and judging the availability of chicken food. I suspect, by their behavior, a full tilt run towards the crows from across the yard, that the two chickens that live in our yard cannot abide the crows, nor can they abide the squirrels, although, if a squirrel knocks some suet down in the pursuit of its own meal, the chickens seem to appreciate the labor. All of this is supposition, likely delusion. Since I’ve stopped doing science under cover of the academic treadmill, since I jumped off into space, it has become clear to me that all of these narratives, within and outside science, are delusion bordering on insanity. In that special way you know when you really know, or are crazy. No one (creature) steps up to correct us of our madness so we just keep on making up stories. It makes the world feel real.  We on earth/play at being people. The massive black hole in our understanding of the creatures with whom we share the planet…is intolerable

What does it see when it, the one I’ve named Crowdle, the one I’m sure I recognize, looks at me with one bright eye? What do I see when I look at Crowdle?  After Darwin, it became more essential to mark the differences.  I can barely stand to use the pronoun “it” although assuming sex when I cannot tell seems offensive. I feel like I need to say this right now. Assuming sex when I think I know is also problematic. Beyond that, although really, I’m going sideways here, I suppose, what is the proper pronoun for a simultaneous hermaphrodite, like the pacific sideband or the giant garden slug? So much crowds in on me I can barely speak forward without taking a step sideways. The needing is monstrous and fearful.

My eyes…protect beneath a fool’s hood. When I gaze at them, look to Crowdle on the roof of the neighbor’s house, the phone wire bridging the two sides of the street, I know I don’t adhere to the skin…my gaze doesn’t touch the creature. Or I suppose. Knowing isn’t an option here. Nor must we flee the void.

Where ever I looked it was there, blocking the path.  Being concerned about people thinking one is crazy perhaps is a sign that one is not. I tell myself that story so that I am less afraid.  Fear of break down is fear of a breakdown that had already occurred. I am painfully embarrassed by the host of crows, twenty at a time during midwinter, fewer when they’ve returned to territoriality, that follow me most of the time I walk in my neighborhood. They recognize me, my dog and my children.  I know this because they do not follow other people here but they follow me, incessantly, they follow people who are walking my dog, and they follow my children.

I send demons to relieve your need. Does anyone notice? They must, the crows are loud, and some like to swoop down over me, brushing me with their wings, or the wind of their wings. Which is a sort of madness. In the grey morning, with my black dog, disheveled as I always seem to be, I know I’m a witch. But not the good new age kind. I’m the scary hands sort of witch.  Powerless ultimately when the stakes are set. Even the whiplash wind….didn’t work

You couldn’t have been different from the way you were. The host of crows is my fault. I started dropping kibbles for them two years ago because I was curious. I know better than to supplement the food of wild animals, like raccoons and coyotes and cassowaries on Australian streets. I’ve been subverting my own understanding. Of course, I also know that the calls against supplementation do not seem to hold for song birds but do hold for black birds such as crows.  Even the crows’ cousins, the blue jays, get a pass on the feeder.  I’ve seen a crow carrying a baby bird away for a snack. The world is legion, the self is suffering form

Marzluff at UW has led the research showing that crows recognize faces and is extending this to everything associated with recognizing a person (their car, for example). Certainly, Marzluff’s crows recognize people they hate or fear, at least, that is one narrative we can apply. If you trap a crow it never forgets, an aphorism you might take from the study. Don’t feel you have to love. Not only does it never forget, it makes sure no one else its circle forgets. I’m tangled up in words again here, my apologies. Desire is an incoercible force. Science makes a narrative I cannot resist. There is no way for me to step outside of all of my constraints, it’s a sort of purity I’m looking for. Purity of thought and being in the world where narrative inconsistencies are forbidden. I’d need to discard language, I suspect. I’d give my tongue.

And really, can beings without language be hypocrites? Not that I necessarily care, since, really, I don’t believe anything is free of language. We just don’t know that language yet. And now I’ve gotten someone’s knickers in a twist. Thought at least, for once, it is not my own pants that are feeling uncomfortable. Fear/like a green glass.  I’m not even willing, despite Levinas, to permit the idea that anything is without a face. Certainly the snake I surprised eating a lizard way down there in Mexico looked at me and had a face to do it with. Am I pushing things too far here? I picked myself up by the hair.

Dropped me.  Once, walking on Capitol Hill, I saw a host of crows and thought they must be approaching, to follow me. Then, to my relief, I saw a small figure of a woman, grey capped, baggage carrying. She passed perpendicular to me and the crows winged behind her. Madness. Time is like a window.

This story: Once my children took the dog and started to walk, accompanied by fifteen or so crows. The crows told the kids the moment I stepped on my front porch. This is how they told them: one crow called and wheeled around and the rest followed, away from the children and the dog, towards our house, where I had just stepped out the front door. I’m the one with the real treasure. What we love barely exists.

I am what you might call conflicted. I have no privacy. I do not want to feel needed by the crows. I am not needed by the crows. But I want them to need me; I chase the cooper’s hawk from the park when it comes to pester them but I hide when a crow looks in my window. The slim threat of truth but little help.

Before, I might not have been so upset at a murder of crows—before I knew what it meant when hundreds gathered and wheeled and screamed and suddenly fell silent and dispersed. The electrocuted juvenile, the adult hit by a truck.

Now these gatherings are like heartbreak. I know. I think I do. I think it is the shape of grief. It is impossible to ask them the question. The secret chamber of the world