Of Death and Murder 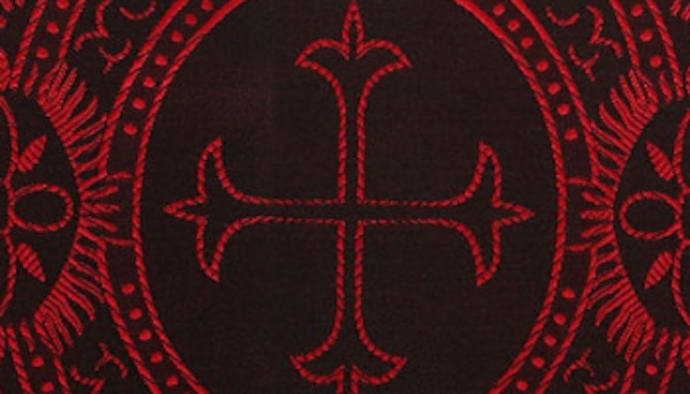 In 7th and 8th grades at Gambetta School in Castroville, some Mexican kids wore cross necklaces tatted from waxed thread. These looped and intricate two-toned crosses—red and black, usually—these kids learned to make in juvenile hall. This kid I knew, Tony Hernandez, already had tattoos. I mean, we were in the 7th grade. I watched him kill a puppy once. The poor thing had wandered onto the school’s field during recess and Tony caught it by the scruff and twirled around with his arm outstretched, like he gripped a furry discus, and he tossed the puppy over a fence into the artichoke fields. The dog gave out a short sharp yelp, and we heard nothing more. Tony made shivs from concrete nails that he’d flattened when a train passed over them on the railroad tracks, and which he then sharpened razor sharp. Tony gave me one of these red and black tatted crosses, but now I don’t know what happened to it. I do know what happened to Tony: after he dropped out in our freshman year of high school, he went to a party and was shot and stabbed, and he died.

Frederic Wertham, psychiatrist and expert witness during Albert Fish’s murder trial, claimed that Fish’s religious obsession drove him to child sacrifice in penance for his own sins. Fish’s cannibalism, Wertham said, was a form of communion. A witness for the prosecution said that religious cannibalism was a “matter of taste.” Fish confessed to the murder and consumption of three children, ages four, five, and ten.[1]

In 1775, in San Diego, two men left the mission grounds to recruit six hundred Kumeyaay Indians for an attack. The army descended into the San Diego River valley and split into two groups: one to attack the mission, the other the presidio. When the pagans reached the Indian re- ducciones, they forbade the converts from calling out to alert the mission guards. Then they set fire to the wattle and daub and thatched roof buildings. Waking to the smell of smoke, Father Luis Jayme approached the Kumeyaay raiding the mission complex, a pale palm to the air, shouting, “¡Amar a dios, hijos!” The natives surrounded the priest then closed in. They stripped him naked and shot sixteen arrows into his abdomen. They beat his head and face with clubs and boulders, and they dragged his body into a dry arroyo where it was found the next morning, after the fighting had subsided.

Crucifixion is an excruciating way to die. Hence excruciating: “out of the cross.” A man theorized to have been crucified in Jerusalem in the first century—or at least his remains—has a spike driven through his heel. Some condemned had a spike extended from the pale upon which they were crucified that sat at the base of the human trunk, forcing itself by gravity into the perineum, anus, or vagina, thus humiliating them while at the same time helping to speed their death. The dying shat and pissed themselves, their waste attracting insects. The eleventh Station of the Cross depicts Jesus clad only in a loincloth. The crucified were always naked. Artists, out of reverence for their Lord, would not undress the man of their veneration. At Our Lady of Refuge, the eleventh Station and the Crucifix above the altar, held a Jesus stabbed and thorn-crowned, blood dripping, and knees scabbed from his three falls.

Like Blessed Father Fray Junípero Serra, who in 1766 forced a confession out of María Pasquala of witchcraft, and collusion with el Diablo que cargaba el balleton to kill, likewise Fathers Damien Karras and Lankester Merrin attempt to command the evil out of the child, Reagan MacNeil, who suffers from demonic possession, evidenced by her spitting, vomiting, fucking herself with a crucifix, talking in a gravelly, evil voice, and cursing. Both priests are killed in the process of the fictional exorcism, which was based on the allegedly real experiences of Robbie Manheim who became possessed in 1949 after playing with a oija board. The power of Christ compelled the demons from Robbie’s, Reagan’s, and from María Pasquala’s bodies, from the native Kumeyaay and Yuma Indians who attacked the servants of God in California, in history, in movies, in Hollywood, through Christ Our Lord, Amen.

In 1781, former military Governor Don Fernando Rivera y Moncada, while on a missionary and colonizing expedition to the desert of southeastern California, along the Colorado River, encountered Yuma Indians when the natives rebelled against the Spanish incursion, burning Missions San Pedro y San Pablo de Bicuñer and Puerto de Purísima Concepción, missions not founded by Father Serra, but nonetheless administered by Franciscans, and set in place to convert the Yuma Indians, to make them subjects of the Spanish Crown and the Catholic Church. Rivera y Moncada, who had been excommunicated by the priests at San Diego for forcibly taking the leader of the Kumeyaay insurrection of 1775 into custody and out from the Church’s protection, was killed.

Father Francisco Palou, Father Serra’s lifelong companion and colleague, stayed at his bedside in the days leading up to his death, hearing the confession of his sins, praying the Holy Viaticum and the Plenary Indulgence of the Order. At one point the Blessed Father said, “I have come under the shadow of a great fear; I am very much afraid.” He asked to hear the Recommendation for the Soul. Later that day the padre presidente drank some broth, hobbled off to his cell and his bed of boards upon which he lay, his cross in hand, and there Father Palou left him in solitude but for a moment. He returned and found the founder of California dead and staring heavenward.

Under Spanish and Mexican rule the native Californian population decreased 51.6%, and while under control of the United States, 83.3%.

[1]“Fish Held Insane By Three Experts. Defense Alienists Say Budd Girl’s Murderer Was And Is Mentally Irresponsible.” New York Times. May 21, 1935. Retrieved 2011-12-09. “Three psychiatrists testified in Supreme Court today that Albert H. Fish, on trial for the murder of Grace Budd in June, 1928, was legally insane when he committed the murder and has been insane since that date.”