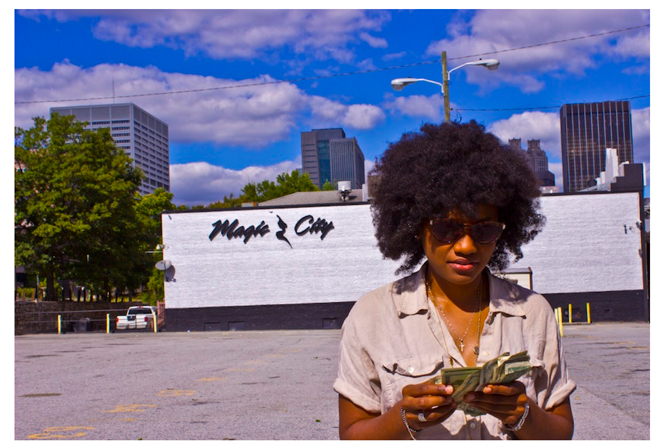 Nikita Gale in the Champagne Room

Nikita Gale is an Atlanta self-taught conceptual artist.  She was born up on a military base in Alaska and came to Atlanta with her family around the third grade. She attended Yale University, graduating with a B.A. in Anthropology in 2006 and currently is in residency at the Studio Artist Program at the Atlanta Contemporary Art Center. Pretty impressive.

Gale recently contributed to The High Museum of Art’s “Monster Drawing Rally,” a concept originally developed by Southern Exposure, an artist resource/support non-profit organization and grassroots experimental venue in San Francisco.  The premise of the fundraiser sparked a lot of controversy with some of the artists asked to participate. Some rejected the invitation outright and decided not to attend at all.

The plan is to meet Gale at Magic City, one of Atlanta’s most notorious strip clubs, to discuss her contribution to the drawing rally, My Labor, Your Leisure, a performance piece that draws parallels between strip club culture and arts culture. We meet in the parking lot to snap a few photos and make small talk.  Gale is natural in front of the camera and thrilled to visit the only gentlemen’s club she hasn’t been to yet in the city.

I start to get a little nervous. The parking lot looks pretty empty. Did I bring enough ones? How are the most badass strippers in the city going to treat three single ladies on a Sunday at three in the afternoon?  Did I wear the right shoes?  All these thoughts rush through my head as we climb the stairs of the metallic silver building and approach the entrance.

Mother fucker. The door is locked. Magic City is closed today.  No wonder a security guard didn’t come out and yell at us for taking pictures in the parking lot. We look up a few more clubs, all of which are closed, and decide to compromise and head over to Nikita’s studio at ACAC. Maybe I’ll be more focused during our interview this way?  Perhaps it is for the best? I’m not sure, but I could have really used a drink.

FZ: As an artist, you’re using your intellect to make money- hopefully- to support yourself, but you’re making work and it is for the gallery to sell. Talk to me a little bit about drawing parallels between stripping entertainment industry and the art industry in conjunction with the High Museum’s “Monster Drawing Rally”. 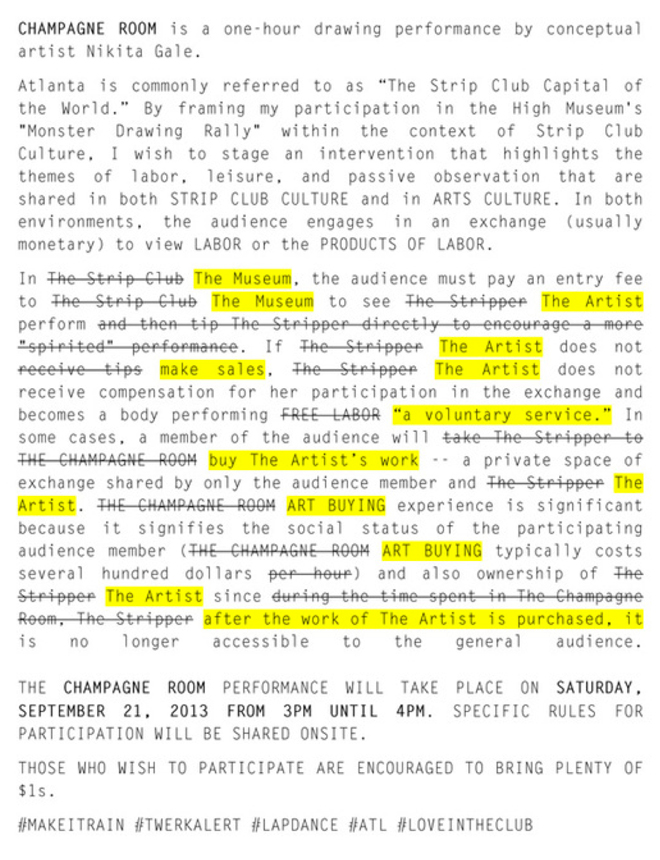 NG: It’s funny because that idea literally just popped into my head. I have always been interested in [the] performativity that is involved in any sort of self-marketing or any industry where there is an element of personal interaction required in which you are revealing yourself.

With the Monster Drawing Rally, at first I didn’t have anything planned. I was just going to show up and draw. Two or three days before, I saw one of my Facebook friends posted this statement about how they were feeling really conflicted about participating because it felt a lot like spec work.

In design and art direction people ask you for work on spec, which means you’ll work and if they like the work, they’ll pay you for it. There is some possibility of you being compensated after you’ve put all the work in.

I definitely think what the High Museum is doing is not exactly that––essentially they’re inviting 70-75 artists to do this drawing rally. All these patrons from the museum come and watch them work. When they’re done creating they put all these drawings up on the wall and someone can come and purchase them for $75. The full $75 goes to the museum to fund the purchasing of work from local artists in the future, but it’s not a guarantee that the 75 artists who are involved will see any of that money.

It’s more of a collective effort where you’re volunteering in the interest of the local arts community at large.  In that respect, I am totally for it and I completely agree with it. But then there is the other side where, and this is something my friend brought up in their argument, you feel conflicted about it because at the end of the day, it’s free work.  You’re helping this institution make money that may not necessarily benefit you directly. 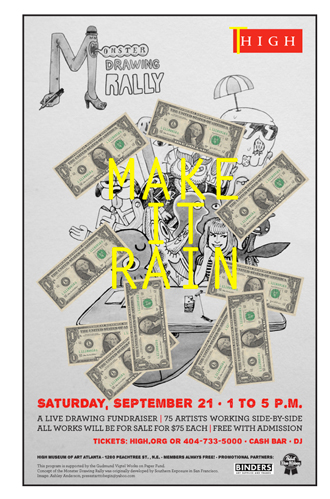 I was interested in looking at that through the lens of strip club culture, which is very prevalent in Atlanta. You show up, maybe pay an entry fee, see something and if you want to see more, you’ll tip.  If you want to go to VIP or the Champagne Room, which is what this performance is called, you’ll buy the artist’s/stripper’s work/time.

There is a parallel I wanted to play around with in the performance that I ended up doing. People paid an entry fee to see “The Monster Drawing Rally”.  You get to see all these artists working and making their drawing, things that may eventually be purchased by somebody else.

Basically, the performance I did was I would only draw if somebody tipped me. I had this little music track playing, a little strip club song, Usher’s “Love in the Club.” It’s so Atlanta. When I was going to strip clubs a lot, that song would come on and the lights would change, the announcer would be like, “Ooooh, Love in the Club!” and they would send out a special dancer for that one. Strippers love that song. I chose the song because there is a personal connection there as well. 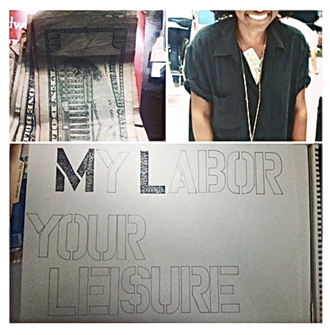 The person would tip me and they could listen to the music to get the full experience and watch me draw until they felt like they’ve gotten their money’s worth. There is also that element where person listening had to make a value judgement in terms of how much do you think my time is worth?  How long are you going to sit and watch me draw for two dollars?

It was interesting to also see how long people stayed. Some people would watch for 30 seconds and then other people would watch for more like a minuet and a half. As soon as the person walked away, I would stop drawing and I couldn’t start working on it again until somebody [else] tipped me.  I just did that for the hour until the drawing was finished.  I hung it up on the wall, sold it, so yeah…

FZ:  How much money did you make?

FZ: What’s your personal relationship like with strip clubs in Atlanta?

NG: Oh my God, my mom is going to be so devastated when she reads this. She actually knows, she found this t-shirt from a strip club…. this is like a long time ago when I was a drinker.

FZ: That’s when you know you’re having a good time, when you’re like, “I’ve got to take a t-shirt home from this strip club tonight!!!”

NG: Exactly. This is the end of 2008, maybe 2009. I was working for this company that shall remain nameless in Buckhead and the office was maybe ten minutes away from the Pink Pony. So in the evenings––this is so bad––I’m going to have to read this before you publish it. So in the evenings I would either go with some co-workers or just go by myself to the strip club at like six o’clock and just hang out there all night.

It was weird because I had recently graduated from college and I was still figuring things out and I just got out of this relationship.  I was just working a lot and didn’t really have a core group of friends.  I would just go to the strip club and hang out with the strippers.  It’s really kind of bad.

FZ: I go to the Pink Pony every Sunday, so I’m not judging you right now.

NG: Are you going tonight? 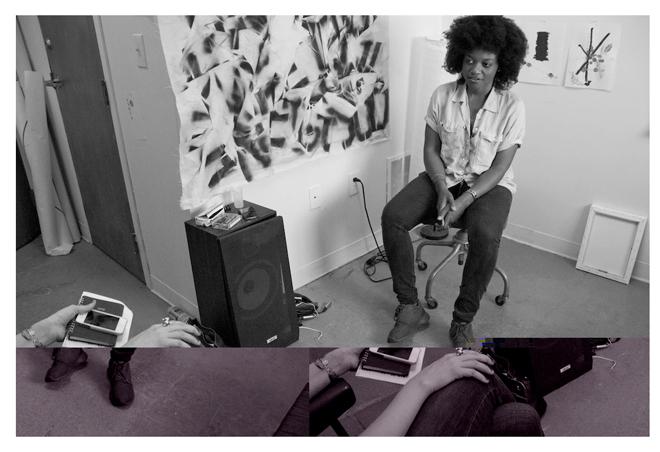 FZ: I’m hanging out with Carolyn Milner tonight, so there is a definite possibility that we will end up at the strip club.

NG: Oh my gosh, you have to hit me up.  So anyway, the Pink Pony was like my place.  And I felt like I was so Atlanta. The real reason I love the Pink Pony is because it is the quintessential strip club.  You walk in and it’s exactly what it looks like in the movies, the mirrored wall and four or five different stages.  At any given time, there is just a shit-ton of strippers dancing. The announcer is awesome. It’s just a nicely laid out, fun place.  Yeah, Pink Pony. Short answer.

FZ: I think we’ve got it! I’m going to have to edit this interview to hell and back. But don’t worry I won’t put you on blast.

Nikita Gale’s work can be found in numerous collections including the Howard Greenberg Gallery collection in New York. Gale has had work featured in ART PAPERS, The New York Times, The Huffington Post, Headline News, and Oxford American and has been profiled and reviewed by numerous publications including Artforum.com and Frank151.