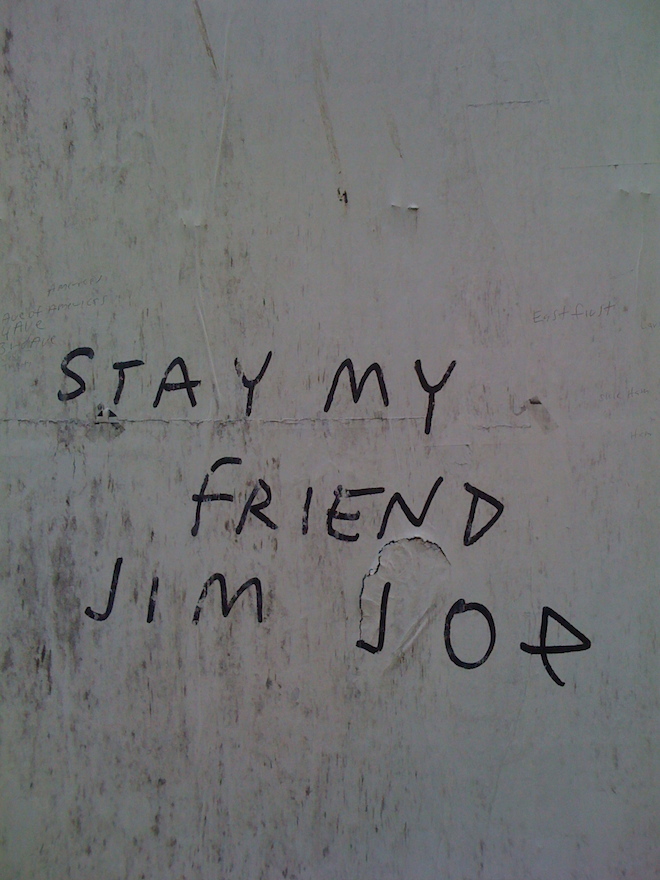 I tend not to know the name of anything or anyone. If I go to the bar and people are jizzing references, I can’t keep up.  I vacation to a word or a curtain or a color. I might pinch my wrist. I might hear two notes or some swollen harmony in the trees. I start to sing in my mind or get sad behind the eyes. I let street names blur by. Please don’t talk to me about books. Just start reading at me. Then, don’t tell me what it is! What a cool curse.  What if someone walked up to you with an amazing story, cracked the book and made you listen? This feeling is a little like late night radio.

There was a rainstorm the day I found this video again. Watching it was like what I buried in the schoolyard, those time capsules full of frog erasers and pogs and notes to yourself.  When I laid down in my friend’s apartment on the carpet after I watched it again, I closed my eyes for a spell. My gray headache left indents under my overalls. I tried to get back to what it was. 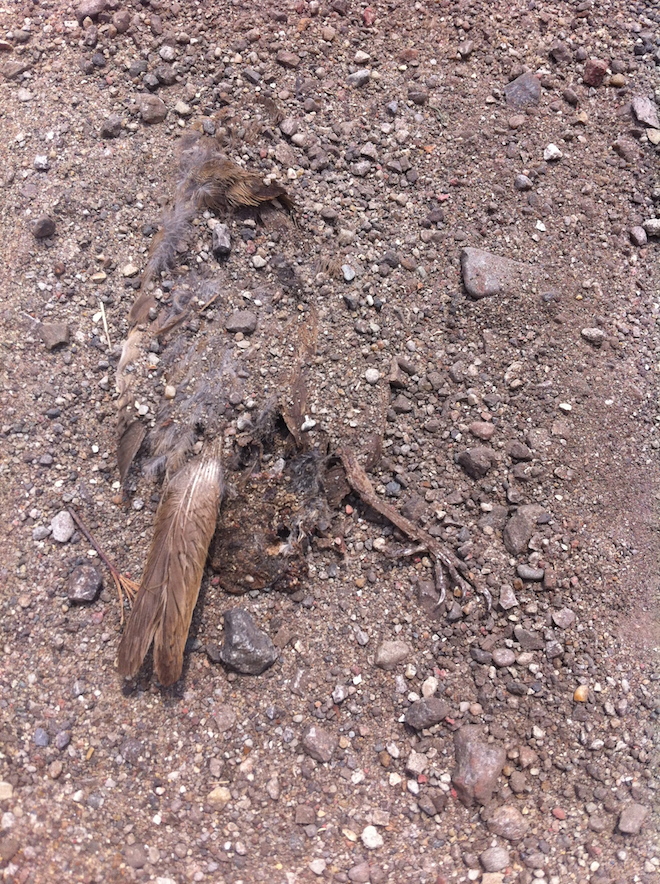 I would visit this installation near the escalators. I nearly shat myself in a Baby Gap prior to its sighting. When I got shits sick, I was looking at the blown-up face of a baby model. My ass slop was so dark, it felt erudite. My body knew something I didn’t.  I felt myself spread like dye. This was the summer of bags of sweaty bags of my moldy cherry. 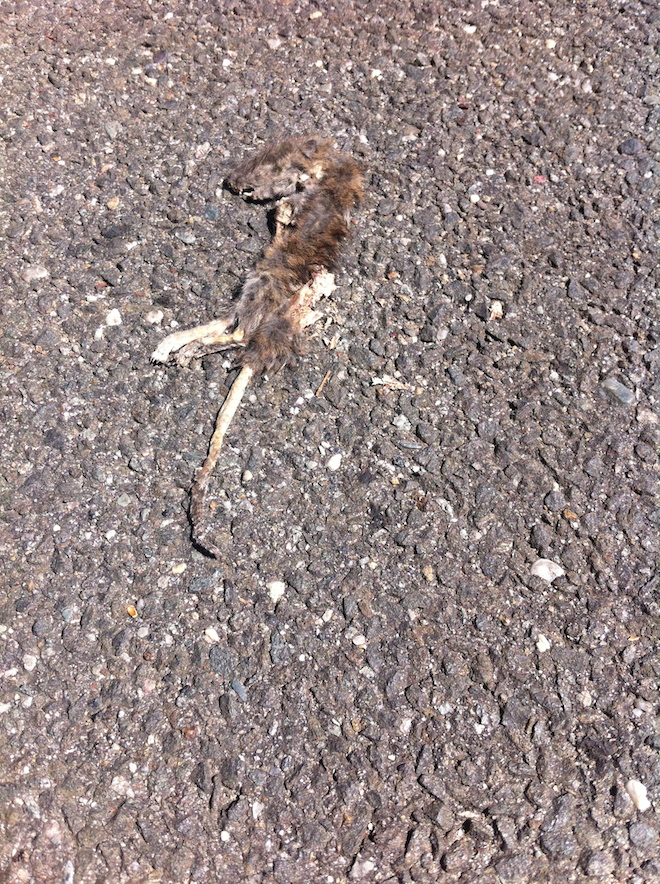 All I remembered of the affects when I would watch what I discovered was called “Green, Pink Caviar” was nauseous like a little lick of pre-cum. Tummy-troubly under the cerebellum bumbling: this how I would ride the train home to Queens after waiting in line on free Fridays to go see the thing. This is when I was learning about writing. It had everything to do with watching mothers’ bottoms sob on the subway. It had nothing to do with what I read or what I knew. That’s how I wrote “Outside Sunnyside”, which is probably my least favorite piece. Maybe I don’t like it because it felt as unfinished as waking up and living your life and then having to go to bed.

I like taking pictures of shit I don’t understand. I like finding dead animals. Maybe this is my favorite thing about New York: what you won’t master. Language became chewing and swallowing raw eggs. This story, a disaster of expression, happened just before I left for the city, when I was writing up on my roof still a girl. Every place I send it wants it to be retitled, but I can’t let go of it. I like how the name sucks because it feels just right. It’s molassesy, like trying searching for a better word and knowing there won’t be one.

Autobiography of the Mere

No one stayed through the whole video. I like that when I first found it, it said the name at the end. It had credits, and a commenter asked “who’s video is this?” The poster said “im affraid i dont remember.. if you find out, please post here so i can credit it properly! tkns!”I found that after all the research. Like, I watched the whole video, and I was so elsewhere that I forgot about the words. I don’t care that Marilyn Minter did it. I don’t want to know anything about an artist’s perspective. Bury it from me, but play the video over my face while I sleep. If something is beautiful, be an amnesiac about it. Set the fuck free, and when it comes back, let it reel you. Understanding -trying to- wrecks everything.

The Kind There Are in Florida

Beauty grows goos of heft. You’ll never get a hold. It’s a voicemail. It’s planning to pull off wearing all white in a bowling alley.  I see myself as beastly, so beauty is something I’m accidentally smearing. How could I can what it says for itself for you? Don’t let me colonize your eyes. I work with a dishwasher named Life, and she runs up to my lips erasing parts of color to keep me drawn in the lines. 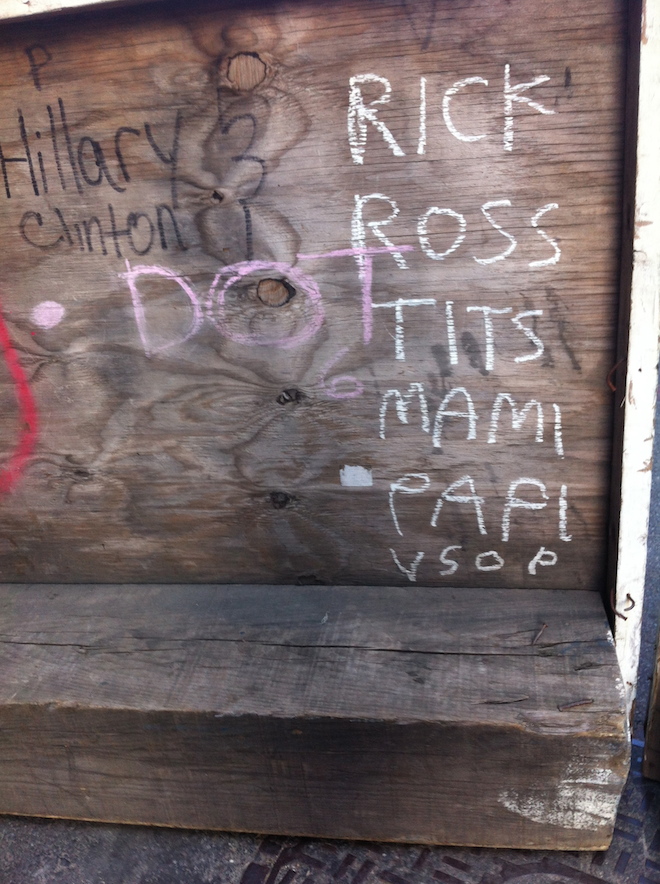 Language should fail. Turn it inside of itself, make it mangy and obsolete. If I make sense, I’m agreeing to the terms. I don’t want you to understand, but I want you to listen. That’s the selfish aim of world-making.  I don’t want you to pick apart what you see here and try to say what it means.  When I was writing this book, I was trying to sing to you how it all was. It was like too much sun or not enough money. It was like all of the garbage in the world.

I like the grotesque glittery mouth. Speech broke for me in writing this. It’s like, why? I hung out at Coney Island a lot and felt close to the trash in the water. 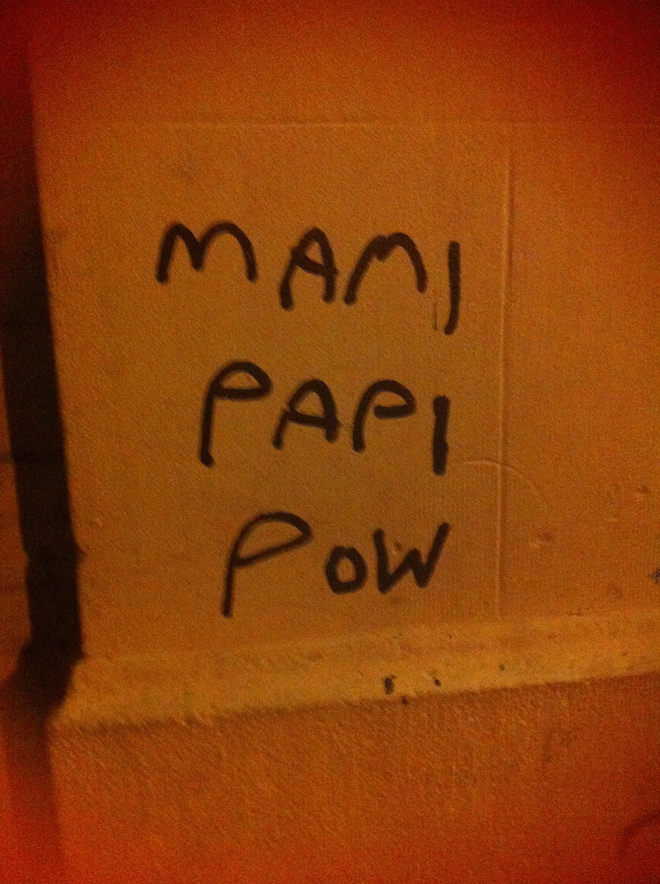 Elizabeth Mikesch is the author of Niceties: Aural Ardor, Pardon Me (Calamari Press). Her work has appeared in Unsaid, Bomb, Spork, and elsewhere.