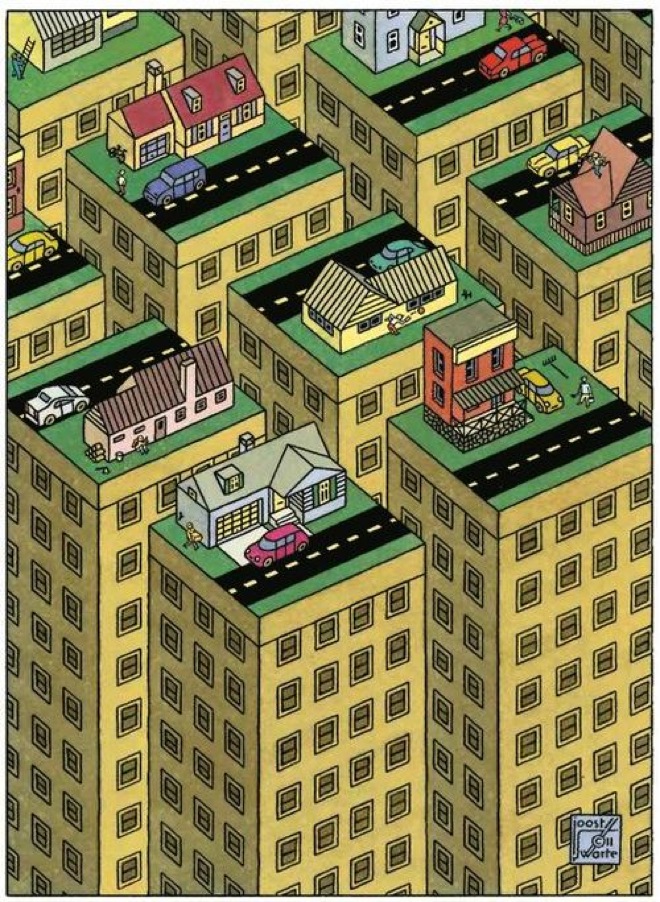 I have been told numerous times over the years by family and non-artist friends that they don’t ‘get’ my work, or that they feel like they’re missing the point, and, though I don’t make any real effort to try to understand what is preventing them from ‘getting’ it, or any effort to change what I make, I feel guilty about alienating anyone, especially people I care deeply about.

I mean, there’s not much value in trying to be understood by a large audience (or any audience at all) because it could/will dilute the work and inhibit real dialogue/progress/meaning, but, um, this is my only argument: I feel bad excluding my friends and family. It’s not a strong argument. I began formulating my counter-argument before I even finished typing the sentence. Who cares what my friends and family think about art? I have plenty of other things to talk about with them. My relationships with these people don’t hinge on their understanding of my art practice. Maybe I am obsessed with getting the explicit approval of a group of people I feel like I have betrayed by leaving the small claustrophobic town they are still (in my eyes) stuck in. Or maybe it is something about how I myself was once a little girl there who had no hoity-toity art education, or even a very good public school education, and believed wholeheartedly that I would stay in the shitty town until I died. I would like to believe that I, as an artist, could connect with someone like her, the young me, through my work, if she somehow found it, which would only be possible, I’m now realizing, if the work was televised on Nickelodeon.

Anyway, Joost Swarte is a designer and comic artist who has been making work for over forty years. He happens to be doing the accessibility thing just exactly right, as his work, while totally accessible, is still brave and weird and thought provoking. Comics, of course, are one of the most accessible types of art to begin with. Even idiot toddlers can understand comics. But Swarte’s work is so many things: beautiful, clever, intellectual, timeless, funny, simple, bizarre, precise, elaborate. Probably even more things. His work is as much about visual composition as it is about art and intellect as it is about society as it is about entertainment.

Some of my favorite Swarte pieces are his one-panel pieces. Two people are lying in a piano, as if in bed. There’s an angry looking red cat on the piano seat. The lines are uniform and precise, sparing any line or detail that doesn’t serve the aesthetic experience, striking that perfect balance between rigorous and unlabored. Personally, I’m drawn to the details on the ankles and knees, chosen so carefully to highlight the dimensionality on otherwise simplistic human figures. The piece is elegant, easy to look at, compositionally interesting, and sort of funny. I could easily hang this on my wall and live with having to look at it every day of my life. 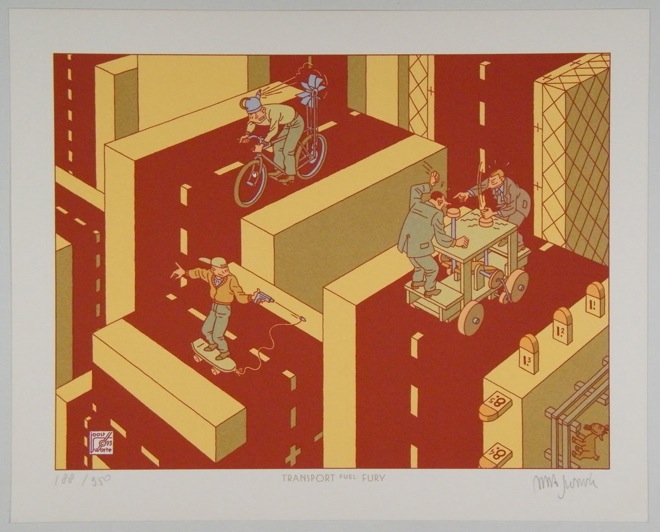 But Swarte is also clearly working through ideas, something you definitely don’t have to realize to appreciate his work, but which adds dimensionality to the seemingly simple pieces. After looking at a couple of other pieces you see that he is clearly creating his worlds from a design perspective, and is working through design questions about how bodies interact with machinery and technology, how bodies interact with other bodies as if the bodies themselves were machinery, and how bodies and machines work with architecture. There is no indication that the characters in his world must use a piano as a bed for lack of a real bed, or the backside of a person for lack of a chair, or one bike for lack of two bikes. The characters seem pleased with their appropriations, and we are momentarily fooled into believing that such uses are fitting. Swarte seems to be suggesting a harmony that exists (or could exist if we were aware that such a harmony was possible) between objects, people, and buildings.

Of course, this doesn’t take away at all from the simple elegance of the work. It is simply an added layer, a bonus for attentive viewers, the meat and potatoes for intellectuals. 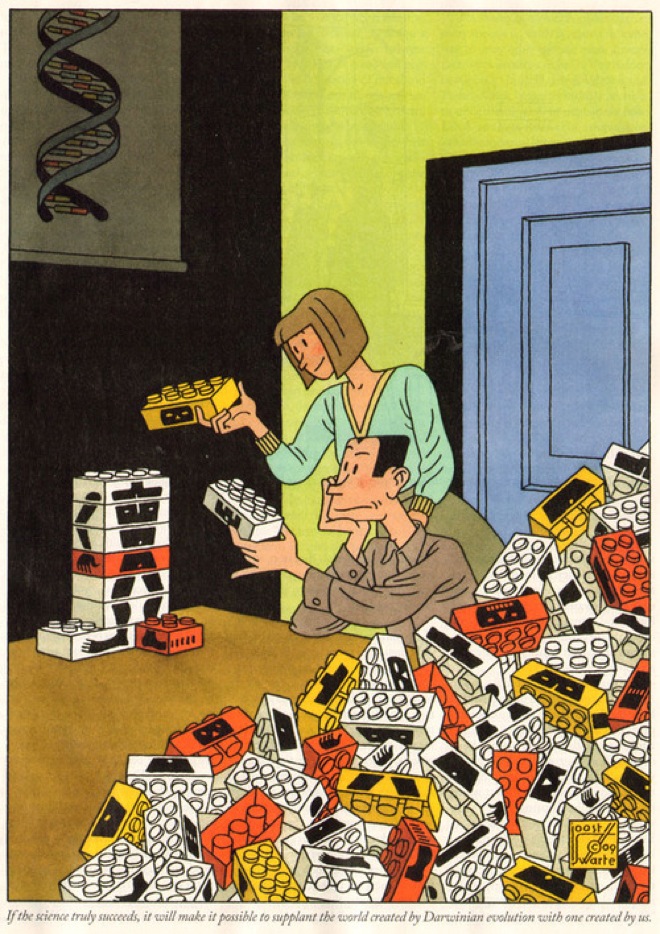 Some of the pieces seem to change in content over time. Maybe instead of seeing a man being oppressed by an uneven number of anonymous (and exquisitely drawn) hands (can’t emphasize enough about how much I love the way he draws hands, can imagine whole religions forming around them, people living and dying for their beauty and symbolic meaning), you see a man who, without the assistance of these four and a half people (can’t say ‘hands’ again or I’ll get sidetracked), would be lost, perhaps irretrievably, in a dark and empty void wearing a work shirt, loafers and what seem to be spandex shorts. Because of the simplicity and ambiguity of some of Swarte’s works, these kind of mental flips are possible. 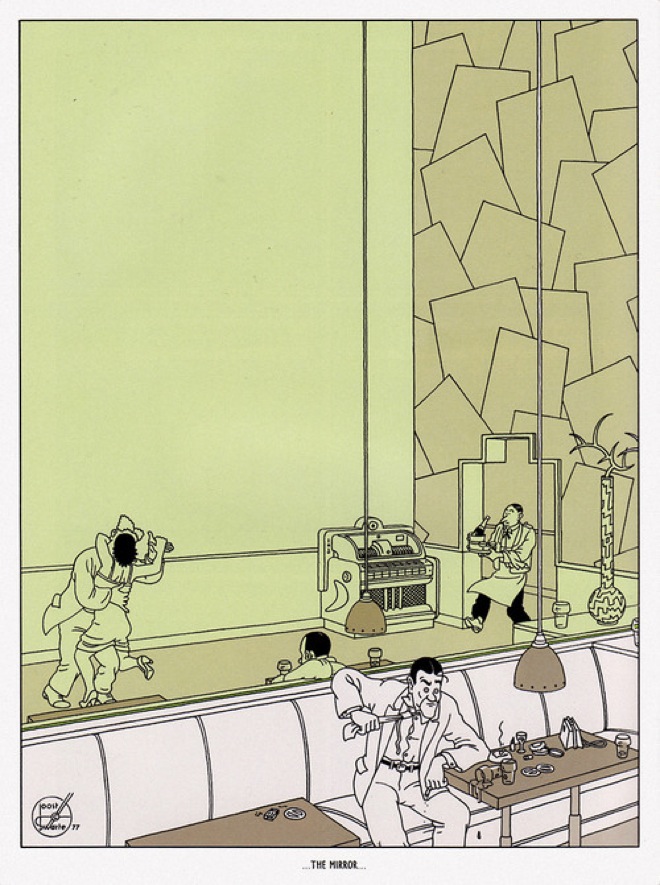 Or maybe, in light of your own life experience and/or the long term relationship you’re in that has no end in sight (which seems like an awful way to put it but is kinda the most appropriate) the couple playing with the large graphic Lego set are possibly grappling with some of the larger issues of coupled life such as should we make more humans? and what should our humans be like? 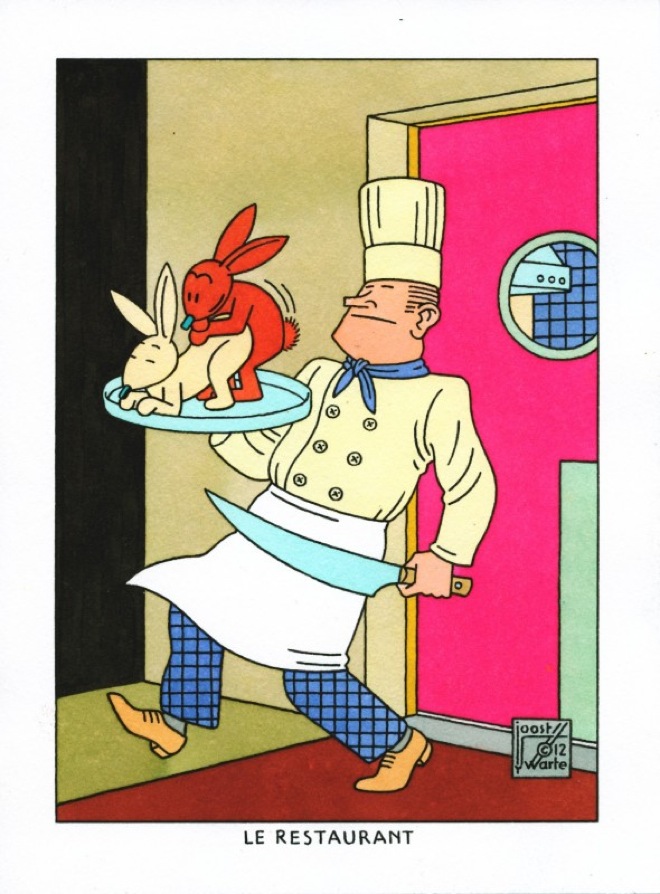 Swarte’s complex design ideas about the role of objects and buildings in our human lives, and his deep interest in architecture, appeals to designers and artists of all kinds, while his simplicity and straightforwardness appeal to those less well-versed in art ideas. And while the work certainly doesn’t appeal (and doesn’t attempt to appeal) to everyone, it has the capacity to appeal to viewers in many different stages of life, artists and non-artists alike, in a visual capacity. And that is something I really admire. Because the point of thinking a lot about intellectual accessibility is to relieve guilt caused by thinking of oneself as different from the people one comes from, and forming ideas about accessibility that frame oneself as more well-rounded and intellectual than others, when I’m neither of those things, as evidences by my favorite thing about Swarte that I somehow completely forgot to mention: every once in a while there’s a naked person. Sexy.