Mock the Death Trance: An Interview with Sean Kilpatrick 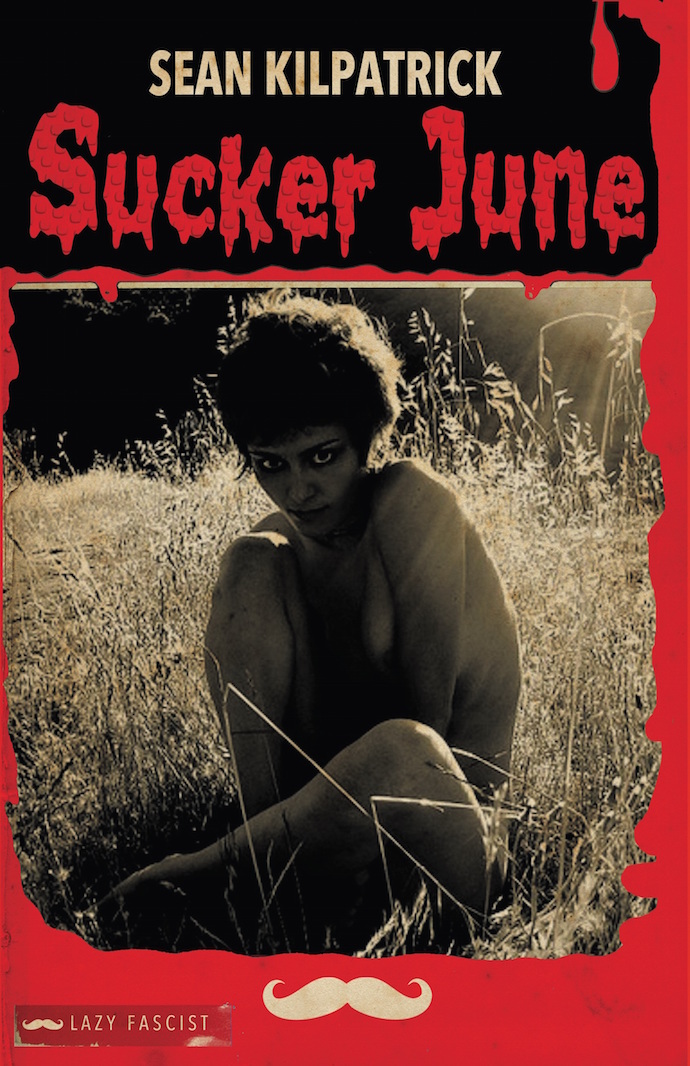 Sean Kilpatrick speaks in tongues. He conjures language into a fever pitch; culls it from the trailer parks and the backwoods, summoning forth a wellspring of haunting images and characters. His new novella released through Lazy Fascist Press, Sucker June, reads like an extended prose poem at times; expertly managing to make language both functional (in order to propel some level of plot), as well as textural. During and after reading the book I couldn’t help but make comparisons in my mind to movies, specifically experimental cinema. The two sharing the idea of submerging plot to make way for a more visceral feeling or tone. At any rate, it was certainly one of the most challenging and rewarding books I’ve read this year.

Sean and I recently communicated via e-mail because we still haven’t perfected the art of teleportation.

Sucker June was one of the strangest, most uncomfortable and most singular reading experiences I’ve ever had. I mean that obviously in the best way possible. What bloody river or slumalley did these characters crawl out from? How did you pin down or find or create that gasoline honey narrative voice?

The intentionally amaurotic practitioners of cursed poetry stole the gas from caves until the applied science of carrying a fire seemed gauche to us and we embraced the label “charlatan.” No gods, no sight, no system, just the brain catering itself to the scream of our collapse. Plato erected his toe in our scalp, the big tent pole against not knowing (philosophy/ethics, religion, then psychology, all of which, when done well, incorporate the void a poet lives) took control and encouraged a massive breed, upscale natural selection. How we misuse knowledge can be the reducing border of a property. We’re just a franchise of knowing where our dangers lie. The more people survive the easier it becomes to mock the death trance. Cave juice death trance ain’t made to suffer its audience; it’s just one’s desperate display, volume eleven.

We do welcome any appreciators of our take on choking. We’re still base humans that way. I want to be out there with my head in an alligator’s shitstar, but I’ve been too raised here, trying to reduce a page to my urgings. So everybody rewards the embrace of a comfortable exploration. Who could blame their giggles? The need for logic is to shout back about impending predators. Poets kiss their predator. Your explicative novelist whose characters reflect social dangers in order to enhance our possible improvement, as if we ever have, or will, meet our potential (anyone touting their alms in group format is about finance and coo to them), your comedian poking the air out of everything with their stakes on truth, I can love all these, but I don’t want or deserve theirs back. I don’t deserve love beyond the totem that has to be so unfortunately, with all effort or lack thereof, rendered how we live now, or lived ever, together, regardless, but look at the struggle to capture being captured now. I’m living out my fucking butterfly net.

The cover for Sucker June is amazing. A friend described it as Goosebumps on heroin.

Her eyes in that photo. I was shown it by who it’s of, wonderful Joy Pollak, around 2007. I composed the book to the photo from then till this last year. The book will never equal the photo. What book will? Is why it took so long. Anna Serrone captured, was very kind to allow use. I was thinking Stine’s Fear Street for the font, but Matthew Revert’s genius did one better. Goosebumps was meant for even younger kids. So is June.

It seems obvious to bring up, but can we talk about Lolita for a second?  Was it an influence or has it just been an inevitable comparison due to subject matter?

The canon’s unavoidably there. Nabokov is where you stalled your babyhead on language. You have to salute your betters and try make that salutation pixelate them toward your wanton idiocy. Maybe Barak’s a crackheaded take on Quilty in retrospect. Certainly Nab’s saying murderers speaks fancy. There’s no longer much visible sky so we read authors. I bow before many. Those condemned to bounce on language gotta be professional bowers.

How important was narrative to you as you were working on this? Not to say Sucker June was plotless, but, at least to me as a reader, the plot was so subverted it seemed secondary or even tertiary to the voice and characters and to simply being submerged into the world you created.

Any event is punked by its telling or who cares. This shit’s viral whether people read it or not.

I found Sucker June to at many times feel like an experimental film. In that, it did not feel concerned with trying to deliver a familiar narrative arc with measured character development, but seemed more interested in conveying a feeling or tone or atmosphere that you almost get sucked into. Like how in David Lynch movies it always feels slightly surreal or otherworldly even though it is grounded in some semblance of our reality. Does cinema inspire your writing, and if so, how?

I came first to film like a neighing kinsman. Anyone could snicker at my picks in the holiest of fresh fields, our Man Bites Dog cinema. We throw such company behind the flicker and produce art despite what it is, that’s the highest breach against who we really are humans might wing. It’s pure loud experience assembled by people eating craft services. On rare occasions, it’s okay that we’re not enough. I do what I’ll call filmic hamstrings for beloved Hobart. They are, to my knowledge, one of the very few journals willing to support a poet-y movie reviewer.

Do you see yourself primarily as a poet? Was writing prose challenging or more difficult or just a different experience for you?

I’m of an ill career, fat with the repressed anxiety of not being allowed to speak in rigor mortis tongue. I ain’t referencing some Iron John penial victory. What I mean is way deeper perverse, way even worse and stunted in the genitals than bored richboys might rub their guidelines on. Drum circle hen men or their snarky opposites. Some find-your-place-or-self-and-succeed positivity. The Nerf ball with glasses shit. I’m saying I have to backwards engineer anything coherent. The hate’s about being pinched breathing and the genius of its hell. By hell I mean people as a people will forever be unrealized and are soothed by knowing how ironically close we stumble near it on occasion. We see how we’re almost capable. We’ll always be hunched beneath the glass ceiling of what we’re capable of, the reason why we’re such a culpable and unforgiven species. Proof that we’ll never grow hooves beautiful as Satan’s is we can draw their likeness without wearing them.

You are from Detroit. Did that have any influence?

I was raised somewhere one might show slight bravado about once they escape, but I don’t think I care to escape, or perhaps I have so hard it doesn’t matter. Nothing’s easier than a white complaining. The croak of saying sets my plate. Play ball is how America teaches kids to kill imagination. My politics aren’t in line. Everyone’s kissin’ babies these days.