Missed Connections to Myself 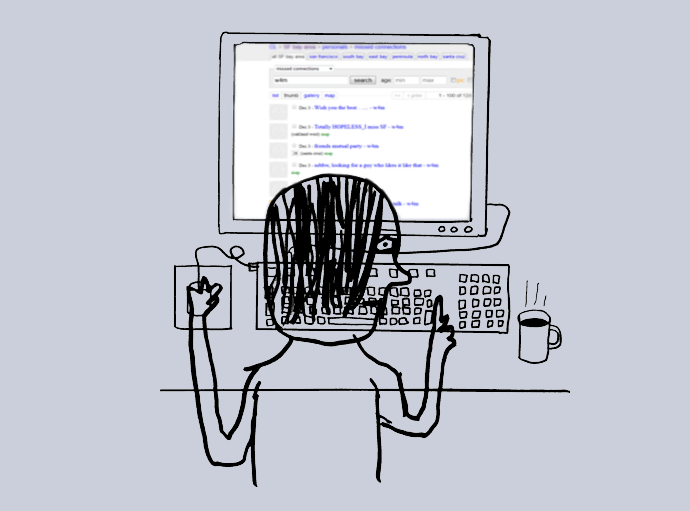 I think you were working on a “piece,” those are your words, for some online thing. You explained that publishing online wasn’t real, in terms of one’s career, but so full of precise verity when it came to “hits” i.e. the collective aggregate of idleness in possibly the worst generation ever. You said you had nothing in your life, and so needed these hits. You were wearing a large V neck beige t­shirt, drinking a cappuccino, into which you compulsively dipped a biscotti to its end, and had eye crust all around your eyes, and on some of your face. You smirked at the prospect of this being a successful piece. Dick.

We were briskly going down 20th street at approximately 15­20 mph. At Florida St., some fucker suddenly turned left (w/o blinkers) into us. We’d both be dead were it not for our lightning speed reflexes, braking so hard that we made a complete “endo,” flying over the bike, bracing the impact with our hands, and (as we’d find out after X­Rays two days later, blue and swollen) sustaining a triquetral evulsion fracture in our left hand. Let’s grab some Advil and make our way to the couch.

This is my first time posting something like this. I saw you from the perspective of someone who was not you, a kind of habitual omniscience hovering behind your right shoulder, like a cross between a disappointed parent and stalker. The game was on, and you idly watched controversial replays in the absence of other things. I felt bad, seeing you slouched over the counter on your third Sazerac, sporadically ogling a group of emphatically speaking blonde girls who collectively had about 12 fl oz. of lotion on them. You know, when your glass is empty, no matter how much you twirl your tongue inside the glass to incite more gravity and its effect on the last drop, there is no drop because the glass is empty. This makes you look like an alcoholic.

You were headed towards Sundance theatres to watch a film over two hours long—the kind of film made by and for severe aesthetes who hold mainstream movies in derision. You were wearing striped socks of feminine colors, maroon corduroys, and had your legs crossed in a manner to suggest this was only possible because you have small balls. You were reading the satirical essays of Jonathan Swift, looking around you each time you read a zinger for corroboration in others; as if, by the miracle of osmosis, people could sense your literary acuity. I’d like to stick a piece of dynamite inside my rectum so that you too would die.

Kale, that’s funny. You really think you’re going to eat that. You always do this. You binge for three days straight then buy a bunch of kale in some vague resolve to only eat healthy from here on out. I’m going to let you believe that while it slowly rots in the fridge. I won’t judge you, or when you reluctantly consider composting it weeks later, say “whatever” or “fuck this,” then throw it in the trash. You are single­handedly destroying this earth. Now can we go to Red Lobster? I love you.

Last Thursday, around 7:18 p.m., about 1.5 ft. semi­parallel (172°) to the right wall—on a snot green Yoga mat, covered in sweat, panting—you fell asleep during Shavasana, sometimes known as the “Corpse Pose,” and may have started snoring. Earlier in the year, after you had impulsively purchased a block of 20 sessions for $275, we had an argument over whether or not you wanted to start yoga in order to meet women, or to “work on [your] core,” which was, in part, because you wanted to meet women. That you were neither meeting women or seeing any significant results on your core we both found subduing. As you lay there, in near darkness next to strangers, on a floor that smelled like foot funk, you tried to visualize your breathing—oxygen molecules tickling your nasal cilia, the squishy tired chamber of your lungs resigned to its involuntary expanse—per your therapist’s suggestion, but found the whole “soft” Eastern philosophy too abstract and perhaps a little self­satisfied, like how it promoted mere breathing into a spiritual act, how solipsist if not arrogant that was, and that consciousness’s ultimate expression was being sentenced to it, that no matter how hard you tried to distract yourself with your breath, you secretly resented it, for it was the very mechanism of being alive which you didn’t ask for, not when you were born, and not now, half­naked on a floor 37 years later, your mother’s legs still splitting into an incomprehensibly bright light as some man in a mask grabbed your slimy head with rubber gloves, then, as if disgusted, held you as far away from him as possible inside a weird room. Dude, wake up.