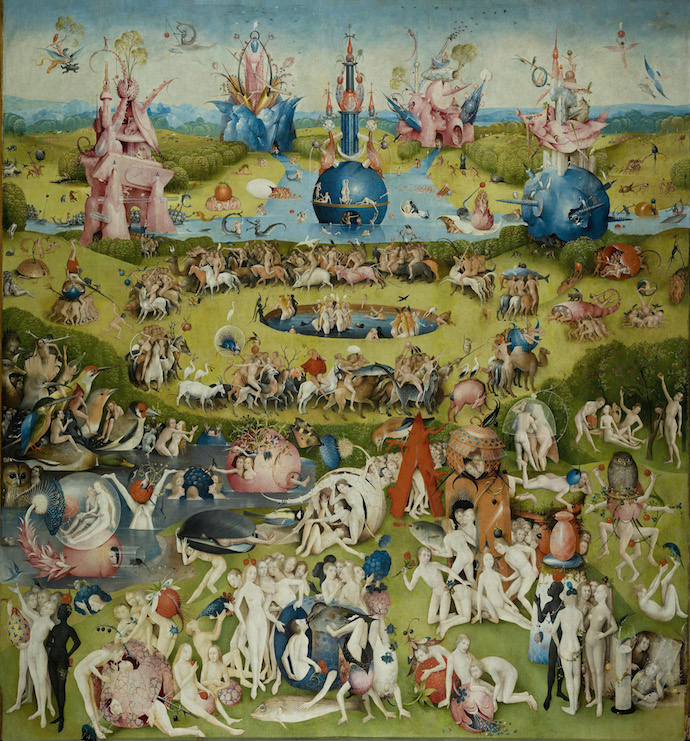 The days there were ready at a moment’s notice to be overtaken by clouds, which would quickly band together to obscure any hint of sunlight. She hoarded these glimpses whenever possible and today was no exception. It was an opportune moment to leave anyway; her apartment reeked of paint fumes. The landlord had sent over a slow moving, snow-haired man to repaint the walls after her roommate had killed herself two weeks ago. “Fresh start,” the landlord had repeated, nervously twitching his hands, the pinkie finger with the gold ring winking. The man layered white paint over the walls, humming to himself as splotches accumulated on his thin arms and legs.

“I’m going to Amsterdamse Bos,” she told the man. He nodded agreeably. She unlocked her child-size bike from its tall companions and started cycling, going through Rembrandt Park and along Vondel Park to make a right at the traffic circle near the church. The street with the bike path was grey brick with a spray-painted lane. It was lined with tin-walled warehouses whose roofs crested in glinting arches.

A low rumbling emanated from one of the warehouses. A stream of people poured out, each carrying a shopping bag. Intrigued, she locked her bike against the chain-link fence and approached the entrance. It was obscured by mouldy traffic cones, jagged pieces of metal grating, saggy cardboard boxes and lorries filled with dismembered plastic mannequins. Peering over the disarray, two lions with mouths frozen mid-roar flanked a weary Buddha. She tentatively walked beyond these guards and glanced inside. The space was cavernous, with twenty-meter ceilings made up of exposed, peeling beams and flickering rectangles of fluorescent light.

The dull throb intensified to a roar as she looked past the piles of queen mugs, water-damaged Dutch books interspersed with the occasional Hemingway and large prints of flowers. She looked to the back of the room and finally placed the sound: crowded bodies. Bodies mashing together, skin sliding. A mob swarmed around several large, metal cubes. Curses in Dutch, Spanish, Arabic and English mingled as shoes flew through the air, their trajectories blurry and uncertain. A torn paper sign flapped dully amidst the energetic digging: “Shoe One Euro.”

Just one shoe? Just. One Shoe? The refrain repeated in her head as sweat coated her skin. Most of the shoes had a tag attached to them detailing an expensive sample sale. She soon found ten similar-looking, but not matching, lavish trainers, which she placed in a pile near the edge of the digging. Her search was interrupted by a sudden hand on her shoulder. Darting blue eyes peered out from bushy, grey brows.

“I just wanted to let you know. There are holes in the bottom.” He picked up one of the shoes from her pile to illustrate his point. Under scrutiny in his flattened palm, the sole revealed a small, circular hole drilled near the toe. Encouraged by her surprise, he excitedly grabbed another from the pile, a shiver dancing through his frail frame.

“Look!” He triumphantly held out a second, then a third shoe. They all had a hole near the toe. The man calmed down as he watched her face crystallize in resignation.

“Just wanted to let you know,” he repeated with a smile. At that he walked away.

Disheartened, she returned to the pile and examined the shoes she had scavenged: every one had a hole in the bottom. Her mouth grew dry and her body weakened with each passing minute. She backed away from the melee and leaned against a rack of cheap leather jackets. Her gaze struck a trio of massive, circular paintings that were posted at the top of the wall, watching sinisterly over the wretched humanity below.

It was a triptych seemingly inspired by Hironomous Bosch’s Garden of Earthly Delights, each circle about one and a half metres wide, arranged in a cluster. She recognized the one on the left, a cracked antler forming an arch from which three emaciated bodies emerged, but the other two seemed to be invented by the artist. The painting on the bottom depicted a monstrous, cracked strawberry, from which an emerald-cloaked bull skeleton in armour sat atop a headless sack of lumpy flesh. A shrieking, grey goblin suspended in a basket brandished a scythe. In the painting on the far right, silhouettes surfaced out of a dusty, reddish mass. As they took on form, they became hybrids of sparrows, lizards and monkeys, trotting along the circle until they were balanced precariously along its edge. At the end, they were devoured by a triumphant cat-like creature. Below the paintings, a dull blue, industrial ladder was balanced against the wall, forming an inverted Jacob’s ladder.

The hairs on her arms stood on end and she decided it was time to leave. She approached the front of the room to buy a one-euro, sickly orange shirt emblazoned with Heartbreaker. The man at the counter, haggard and covered with two-day stubble, peered down at her disinterestedly.

Another man, pale and doughy with dark circles under his eyes, came to the counter and gestured to the crowd milling over the shoes. “I don’t know how anyone finds anything in that mess.” The lips of the man behind the counter turned slightly upward and he leaned down conspiratorially. “There are no matches,” he said softly. She didn’t know whether to laugh or cry. In the end, she stared dully at the man and left.

As the rainy week progressed in her newly whitewashed apartment, thoughts of the warehouse obsessed her. When the clouds parted again on Tuesday, she needed no further motivation.

The warehouse on a weekday was subdued and relatively empty. Whereas on Saturday the back of the space had been crammed with mesh cubes holding shoes, there was now only one cube. Two women poked around the paltry selection, giggling to each other. The shoes weren’t very tempting, but she felt a strange desire to buy just one of them. She grabbed a metallic le coq sportif.

There was a different man at the counter this time. When she held up the shoe, he gazed ahead vacantly, his hazy brown eyes rimmed with blue. “Two fifty,” he spat.

“But just last weekend they were only one euro!”

“But there is no match and this shoe has a hole in the bottom! Come on.”

He continued to stare ahead and his mouth flattened with displeasure. “You could find another match somewhere else. You could plug the hole. I set the prices.”

She set the shoe down on the counter, strolled to the back of the room and started to climb the ladder.

Rachel Pafe is a writer, researcher and freelance editor based in Amsterdam.