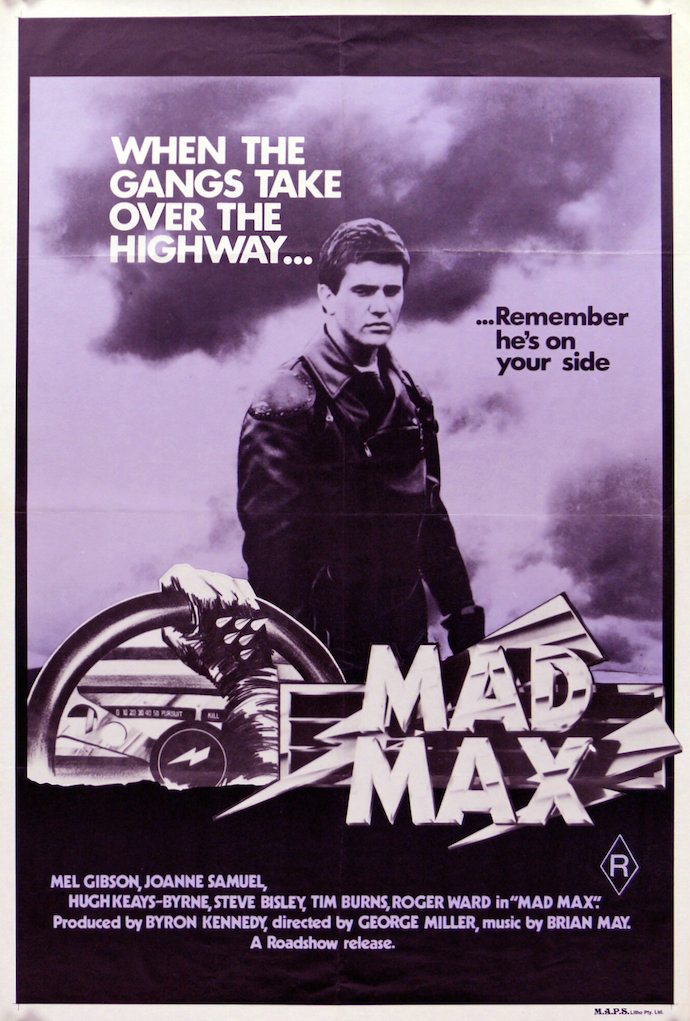 1. To begin: there is the couple in the grass through the scope of the rifle, naked; there is the pursuit car with the cop getting a call of a chase; there is the cop with the rifle for an eye looking at what he can fuck with; there is the joyriding Night Rider, screaming his head off on his way to glory, having killed some cops. How this goes is not well, not for the cops, because mostly this far they’re idiots or they’re assholes. “You’re blaspheming again,” says one cop to the other. “I don’t have to work with a blasphemer.” “They’re gonna die,” says the other, later.

2. The Goose takes a gander at his breakfast in the diner telling a tale of a man who went through the windscreen headfirst into the trailer, then bounces back through the windscreen, just sitting there, trying to scream, with his face ripped off. Out the window is a car chase! “Golly fellas! Gotta run!” thinks the Goose, leaping over cars, hopping on his bike and racing off, fast, to break off a bit of justice, as Max attends his car.

3. “Stay off the fucking roads!” is what he shouts, and we all agree, as pedestrians and shitty motorists stop abruptly all over the highway, leading to crashed cop cars and busted bones and bikes. “What’s just happened???” asks the shitty motorists. “I don’t know man!” laughs the Goose, “I just got here!”

4. Max attends his car in the manner of a man intending pursuit, and begins his pursuit. The Night Rider screams with the conviction of a half-assed disciple reciting the words of a prophet he never understood, but whose meanings he kind of guesses at. Max runs his car right at the Night Rider and everyone swerves but the thing about Max is he swerves right back around all over again and is right up in their asses in the manner of a guy who is right up in your ass and the Night Rider, he is losing it because he knows deep down that he is lost here. He rockets around a wreck into the rubble of an oil rigger and goes up like a shitty burnt-out firework.

5. Max at home with the kid, drinking beer, while his wife plays the saxophone, at night, in a house near a beach, all low-slung on stilts. Max having showered as his wife towels at his hair while the TV tells tales of death and disaster. “You made the news tonight,” she says. But this is a thing he can’t quite talk about: the news, the road, the life he needs to live to do the things he does on it. Max in the kitchen in the morning up early in uniform eating up some toast. She’s sad; or, not sad, but has a look like there’s things happening she can see happening, and isn’t sure how to stop them. Max puts on a mask to get her to laugh. “I’m not grumpy,” she says. He tries to laugh so that we know that this is all a joke, this pain, this ache, it’s not real, it’s just a joke, but she tells him to get out of here so he goes to work. She follows him out there to the car which is his work and shouts, “Oi!” and he says “What,” and she points to her head, spins her fingers, points to her eyes and lips, tells him she’s crazy about him.

6. At work comes the Goose on his bike in a cast. There’s a new car, and it is fucking insane, this car, you guys. I mean just oh my god, this car. Is Max impressed? Oh. My dudes. Is Max ever im-fucking-pressed.

Upstairs the bosses are listening over the box that lets them hear what people say throughout the building. Max wants to leave, to live a life with his family, is the picture gets painted for us, but maybe if they give him a new car he’ll stay and be a cop forever?

Anyway there’s bodies and wrecks for miles and miles, each piled up on top of the other. There’s death threats on Max for the death of the Night Rider, but Max figures he’ll just add them to the pile, in the corner, in the Halls of Justice, near the buckets, where dreams go to sleep it off. 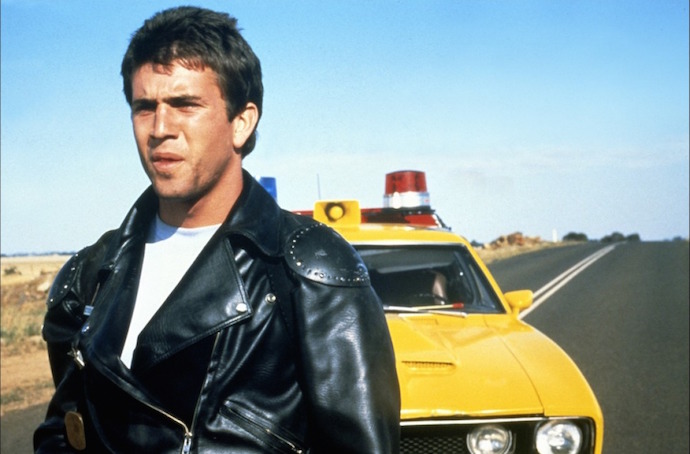 7. Right here is a town and in a town are motorcycles, ridden in for reasons. In a world outside of this one, George Miller shipped the bikes to the city where his actors were and had them drive on down to filming together, forming a bond, staying in conditions other than those playing the bronzed arm of the law, building up the ways in which one is treated as less than the other, while in this world they dismount; they grab at the earth in prayer or supplication; they grab at each other and dance; they collect a coffin. The menace is palpable. Bleach blonde Bubba’s Liev Schreiber face dances like a guy’s who wasn’t certain what a smile was for because the only thing he knows is how to look at you until every inch of you wants to look somewhere else, which is anywhere, and always.

A man on a motorbike spins it around, burning rubber into a perfect circle on the asphalt, then rides off into nowhere or anywhere.

A man smashes an ice cream into a face and then eats it off that face, chases it into a house by dancing, and, later, flings that face and its attached body out a window while a couple in the corner gets in their hot rod and races off, hot for freedom.

8. The thing about a race that I’ve learned from movies that are fast and also furious is that to be fast you have got to be furious, and I also learned that fear, well, fear is the little death that makes it harder to put the pedal to the fucking metal.

Later, Max finds the guy dead and the girl chained to the car and Baby Johnny babbling about bikes and the Night Rider and the Toe Cutter, that Cutter of Toes, and they haul him in because what would you do?

9. Does shit go down? Shit does go down. The man fearful of blasphemers speaks through his neck with a stick. The Goose is at a night club and smiles at the singer. In the morning the Goose gets dressed and goes to work. The Goose gets in a wreck and calls for a tow truck and drives the tow truck back home and then he gets in another wreck, and is set on fire, by Baby Johnny, at the behest of Toe Cutter, who wants all cops dead, because of reasons, mostly related to lawlessness.

10. Max has fucking had it, you guys. First the Goose is probably dead, and the Goose is his best friend. Plus, second, Max understands that he loves his job. He understands that the longer he does this, the longer he spends on the road in pursuit of the lawless, the closer he gets to the line between them going into a sort of dotted line you can slip between. He stares at the road, open before him, and loses track of that which tethers him to a place, to a self. There’s a freedom to it, but it’s the sort of freedom that comes from cutting away the parts of you that want to hold and to be held. And Max sees this, and is fucking terrified. 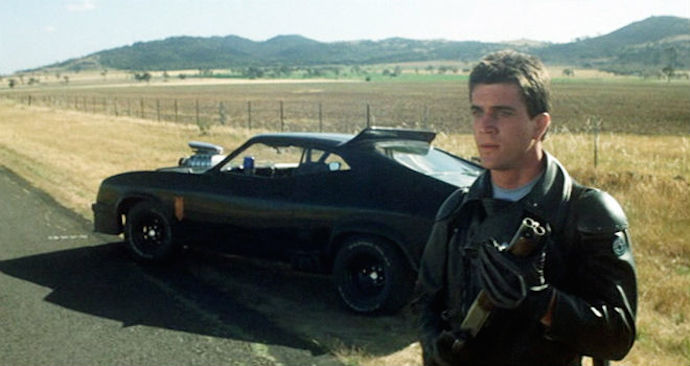 11. Max goes on vacation, to clear his heart and head! It seems like a great plan. His boss is all, Max, I think you need a vacation, to clear your heart and your head, and when you come back, your job is still here, because we really value you. That sounds amazing, you guys. I don’t even know what kind of sci-fi fantasy this world is anymore, and anyway so Max and his wife and baby are at a beach. Max tells his wife a story about his dad, and about how much he loved his dad, and how proud he was to be his dad’s son, and how he never told his dad this, and he starts to get choked up a bit, and he turns to Jessie, because guess what?, his wife’s name is Jessie, and he tells her he doesn’t want it to have to take 10 years to tell her how he feels about her, because just and then she kisses him, right on his dumb mouth, full of feelings.

Anyway then they get a flat tire and Max talks to the mechanic and his wife talks to some ice cream along with their baby but guess what?! Toe Cutter and his bikers are there! And they creep around her and follow along on a roof creeping like cats and Toe Cutter licks her ice cream cone like it’s a piece of pussy instead of an ice cream cone and she smiles at him as she knees him in the balls and gets in the car and drives the fuck off with the baby screaming and there’s Max, talking some fucking nonsense about tires, and she yells at Max to get in the car and he says why and she tell him to just get in already Jesus come on WTF and he does and they drive off with a hand attached to a chain that used to be attached to an arm that wanted to attach itself to the car, and anyway they get followed but for a minute it all seems fine. They stay with some folks in the country. It’s real fucking bucolic, if bucolic means like pleasant, and forested, and just pastoral as fuck. Which it does. And so it is here, in the country, that Max finds a way to tell his wife he’s crazy about her. She promptly goes to get Tarzan some bananas, and but she doesn’t find bananas, but she does find a beach!, and, after several scenes of menace and mild mayhem and even more menace, she finds her death, at the hands of the bikers, who have followed her there.

12. This is a movie called Mad Max about a man named Max Rockatansky who works as a cop pursuing criminals on the open road in an Australia that hasn’t collapsed, but which you could maybe see how it could at some point soon. This is a movie about which it is useful, or at least important, or at least vaguely compelling, to that in this movie, all deaths are brought forth not on the backs of bullets, but on the wheels of a wheeled ride, all crumpled thunder and burning fuel, all fucked gears and dead intentions. This is a movie about a man who is aware of his sense of self crumbling, and tries as best he can to build some bulwarks against the strangening of his heart. This is a movie about how that is real cute, it is a real nice thing you did there, Max, but I mean, we murdered your wife and your baby and now it’s just you and the road and a pile of death, which is what is at the end of the road, and the question becomes basically who gets there first?