Liking Things is the New Black 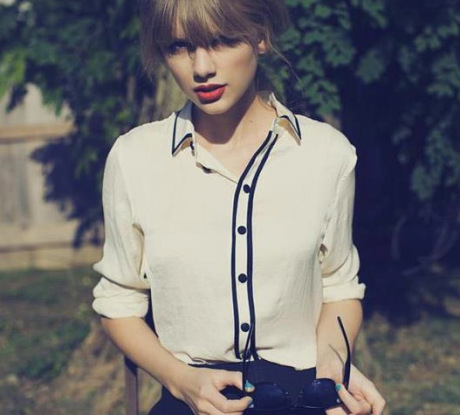 I used to hate Taylor Swift.

Not even, really. I hated what “she was about.” I loved that song “Mean” because it was catchy; I loved her song “Fearless” because it was fun to sing along to in my car when the radio was on and no one was around to see; I loved “Fifteen” and “You Belong with Me” because the lyrics just like, got it, you know? But until a couple years ago, I hated Taylor Swift.

It didn’t make much sense, and I’ll totally give you that now, but back when I was “cool,” it was stupid to like the same things as junior high girls. Given that logic, I also stopped liking sunshine and butterflies and kittens way back at 14, but you know, maybe those things were a little less vapid and a little more universally adored than Taylor Swift.

I can give you a list of bands I was in love with until they made it big. I tossed aside albums as soon as I heard them playing at Starbucks or on Grey’s Anatomy. I loved The Format, but hated fun., even though it’s the same lead singer and the same exact sound. Really, it just wasn’t interesting to listen to the same stuff everyone else was listening to. I preferred lost tapes from Yoko Ono and Velvet Underground B-sides.

You know what used to be fun? Finding the banality in universally adored things. Why Ke$ha was lame. Why Nas wasn’t as with it as A$AP Rocky. It was fun to put things down! You know that perfect satisfaction you get when you diss a guy and you see it land and just like, crush this person’s entire motivation for living? Imagine doing that to every single person getting big in pop culture!

Find a flaw in a book? Point it out in your review. Demi Lovato cracked on a note in concert? Tweet it! Mediocre performance at the Grammy’s? Oh my god, I can’t wait to see what gifs Buzzfeed makes of this tomorrow.

Then, a few years ago, it seemed to change. Suddenly, it was less fun to bring up how bad Lana Del Rey sounded live that one night on Saturday Night Live’s notoriously bad stage than it was to take about how smart a song it is that pledges allegiance to the dollar and how cool a music video it is that lets the lady surround herself with freaking tigers. Suddenly, it seems like we all started liking Taylor Swift because dammit, her songs are pure fun and goodness and we’re tired of hiding! Suddenly, hipster cooler-than-thou attitudes and dress were replaced with normcore, and the idea that pointing out the flaws in things no longer helped you hide your own.

I started seeing it in myself before anyone else. The more I wrote, the more I wanted to talk about things I was obsessed with – Grimes, Beyoncé, Sky Ferreira – and the less I wanted to waste another minute of my time and word counts focusing on stuff that I didn’t care about or didn’t like. I started wanting to prove in my writing why Grimes is worth listening to and why Sky Ferreira is an acceptable role model for your 15-year-old daughter rather than keep my love for them hidden. I want them to make it big! I want to hear them on the radio and sing along to their songs with my 16-year-old cousin!

Maybe Lorde’s the best example from my side. I heard the girl first on Pitchfork (yes, I read Pitchfork every day; no, I don’t think it makes me infinitely cooler than you and your record collection), which really, isn’t the most promising place to find girls who’re gonna make it big. For instance: have you heard of Kelela yet? Heard of Frankie Cosmos or Tacocat yet? But anyway, when I heard about Lorde there, before the radios started playing “Royals” on repeat, it was fun and exciting. Here was this girl that had everything I was looking for: vocals, beats, lyrics, precise lipstick regimen! And then, when she did get on the radio (as the world is infinitely better for [seriously – I wanna see statistics on how much higher self-esteem the girls graduating from high school next year have compared to even my 2009 class – I bet it’s significant thanks to inspiration like Lorde and feminist Beyoncé]), I was so excited for her. I mean really – if you love an artist, don’t you want them to be the most successful they can be? Don’t you want everyone to appreciate them as much as you do? Don’t you want Lorde to win all the Grammys? I did, and I listened to her more after she won, not less as I would have used to.

On the flip side, why spend any more time focusing on the crappy parts of pop culture you don’t care about? Space is space, posts are posts, but still: there’s gotta be a limit. I’m too young to keep track of a thing like this, but did the amount of negative reviews rise with the internet? We have unlimited word counts on the web – suddenly, we didn’t have to decide between talking about that new St. Vincent album we’re obsessed with or that new She & Him album we hate – we could write about them both!

Do we need to, though? Do we need to spend twice the effort focusing on things we like and things we hate? Wouldn’t it cut our work in half to only focus on the good stuff? Wouldn’t the magazines be able to squeeze in twice as many “Hits” photos if they stopped wasting space on the “Misses?”

Furthermore, why don’t we all cut the crap and call a Hit a Hit? If you like Taylor Swift, just say so. If you’re tired at work because you stayed up all night binge-watching Say Yes to the Dress episodes, it’s fine (trust me, that show is amazing). If something appeals to you, it’s valuable! Sheer fun and enjoyment holds as much merit as high-brow-ness, wit or esoteric-ness. There are not right and wrong reasons to like something.

Luckily, I think we’re all realizing this. When I pitched this article to my editor, I sort of asked, “Is this ‘liking things’ phenomenon even a trend, or am I just growing up?” Maybe it’s both. Maybe I’m growing out of my cool kid phase, and maybe society or the media world is at the same time. I’ve been seeing more and more cheerleading, less and less bashing in the culture. Maybe it’s the stuff I’m gravitating towards. Maybe we’ve realized everyone is cool, whether real or ironically and it’s just not fun anymore to talk about why they’re not. Everything appeals to someone, doesn’t it? I mean, look at Crocs. Somebody (some thousands, really) loves those! Are we convincing thousands not to wear them, that the comfort appeal is illegitimate just because “hahaha those are sooo ugly!”

The other day we were talking about Justin Bieber at work and my boss made the statement that she’d like to start a website called justinbieberisadouche.com. We laughed but ultimately said, “hey, you’re probably too late. I’m sure it’s been done.” A few minutes later, we checked, and lo and behold, the domain name is still up for grabs. Looks like in all the internet, nobody has enough time to maintain a site hating maybe the most hate-able guy in pop-culture. I think I’m cool with that.