Kim Kardashian: Hollywood is the Best Game Ever, So What

I downloaded the Kim Kardashian iPhone game because I thought it was going to really suck. It does not suck at all.

I heard about the free game from writers. I read all these articles about how offensive the game was, how spoiled and 1% and superficial the whole thing was, and on the whole, how much it sucked. So, when I was sitting on the bus one day, bored because I had finished my book and still had 20 minutes left until I got to my stop, I thought, what the hell, I’ll just give this game a look-see. Much in the same way that I will watch a horror film called Revenge of the Lesbian Werewolves II, or any horror film that may be produced starring Kim Kardashian. I think the phrase goes “For shits and giggles.”

Maybe it would be useful here to quantify just how big of a Kim / Kardashian-clan fan I am on the whole. I’ve never even seen more than a 2-minute clip of Keeping Up with the Kardashians. I read Vogue, including that Kim/Kanye spread about their lives, which is really the longest I’ve spent time reading anything about Kim. I do like Kanye, and I trust his judgment (generally, as much as a person generally could), so I am willing to give Kim the benefit of the doubt. But really, I don’t care about Kim Kardashian. I am deeply ambivalent. I am not the ideal candidate to rave about a game in anyway connected to her.

Upon agreeing to the rules and copyrights and entering this game, you create an avatar for yourself based on face shape, eye size/I guess shape/color, nose formations, skin tone, hair color and style, etc. I guess this is sort of what I look like, since there is no way to undo the massive boob job that all avatars are born with. Except, there is the option to rock blue hair, so I frequently take that option. 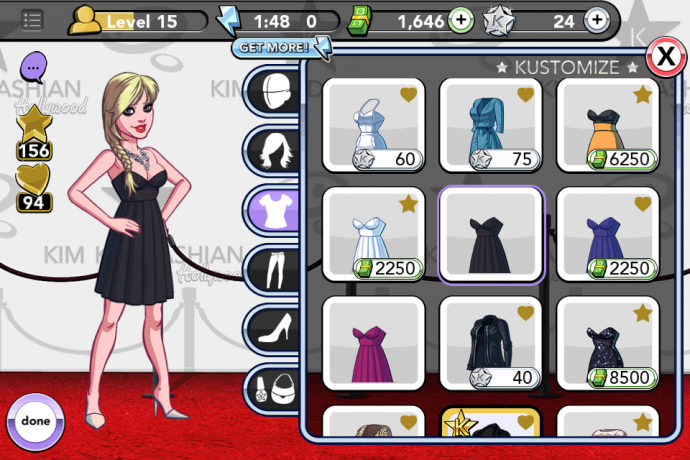 Also, you can’t choose a realistic weight, or to have your arms appear to be part of your natural body. #sorrynotsorry

So the story begins, you’re just this simple happy-go-lucky chick in Downtown LA working at a clothing store called “So Chic” (such a good name, right??). You’re about to close up shop when KIM KARDASHIAN SHOWS UP AND NEEDS A DRESS!!! Of course, you let her in after normal business hours because you’re not literally the stupidest plod ever. She asks you if she should get the red dress or the silver dress, and of course you say silver, because have you seen that girl in red lately? No, because everyone knows she looks way more dope in silver. Duh. Kim is so thankful, she’s all like, hey, have my number, you got good style, girl! And then she starts inviting you to parties and having you to meet with her managers and publicists and wanting you to help manage her own chain of “Kardash” clothing stores and setting you up on dates and now life begins!!

Oh, and almost immediately afterwards, you meet the villain of the game, your archnemesis for virtual life. Like, I just walked into this bar, and some dude with an amazing butt chin said hi to me, so I said hi back, and then this chick named Willow was all like, “Did I just see you flirting with my man??” and I respond, “so what if I did??” And the rivalry starts. Throughout the game, she tries to bash you on Twitter and make you lose followers, but be above that, girl, please. I think the saying here is “haters gonna hate.” 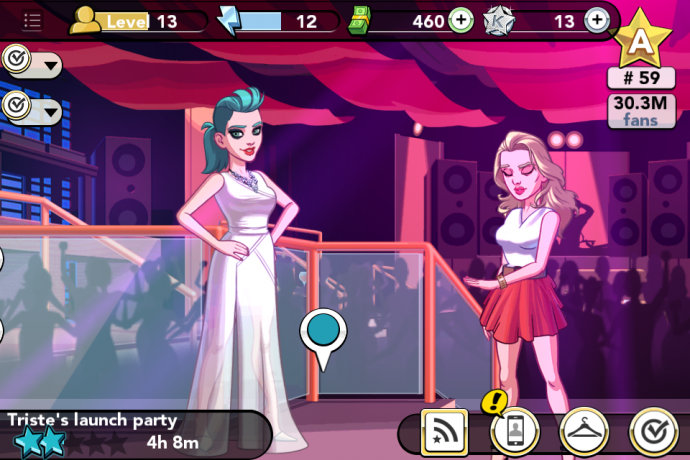 At this event, Willow is the basic looking bitch to my right. So basic, right?

There are a ton of little pieces to the game, but essential the ultimate be-all-end-all goal is to get as many (game-avatar) Twitter followers and get as high on the A-list as possible. Since I have 40+ million followers and am currently sitting at #3 on the A-list, I guess you could say I am pretty good at this game. At least better than any of the writers that bash this game, probably because they couldn’t make it off the D-list before their article was due.  #sorrynotsorry #blessed

There’s a whole bunch of different ways to get followers and move up the A, B, C, D lists, my favorite (and perhaps the overall easiest) being to star in photo shoots. Basically, your managers calls you and says “OMG Glamm Magazine wants you to star in a high-profile spread!” and you say, “k,” and then hop on a plane to Glamm and use your energy points to complete various photo-shoot related tasks such as “Wardrobe Change,” “Right Like That!,” “Profile Shot,” “Wait For Backdrop Change,” “Smile!” and so on. If you complete the shoot in the allotted time, you get all the points that help you move up to the next level, plus a bunch of cash, and also, those followers. If you don’t complete it, you’ll only get some cash, some points, and a few followers, unless you do a really shitty job and actually lose followers. You think Kim Kardashian doesn’t lose followers in real life?? This shit is real, folks.

Other ways you can get followers include: making appearances at events to promote shit like moisturizers, vodka, motor oil, etc; buying new pretty clothes with the money you make from photo shoots and/or working shifts at the Kardash stores; buying second and third homes in Miami and elsewhere, etc.; and, my least favorite, going on dates with famous people. 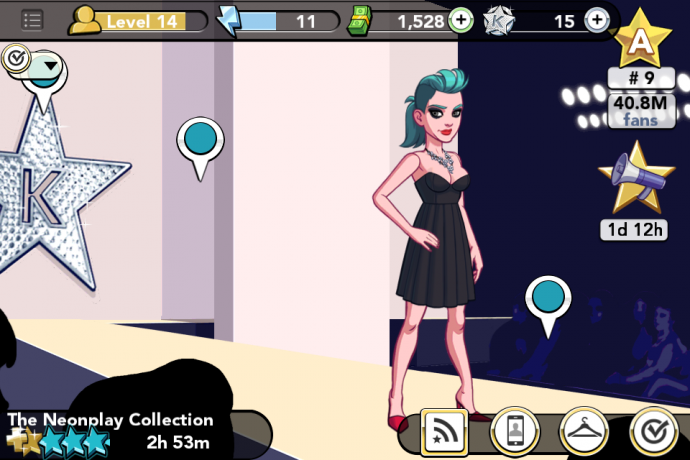 Your girl rocking the runway. #blessed

Ughhhh. Why is dating in this game the worst?? First of all, you have to do all the work. You have to call the person and request the date, even though they never say no (if you have the power to call them for a date, they are automatically down to clown). Then, you have to pay for the entire thing. Also, when you show up, no matter what you are wearing ($150 dollar t-shirt or $3000 dress), your asshole date makes some snide comment about what you are wearing, either like “I wish you’d have put more effort into your outfit,” or “I’d never thought about wearing THAT on a date,” even though their outfit probably cost like half of what yours did. Dicks. At that point, you can make the choice to start the date anyway and pour a whole lotta cash on this dick, or you can break up with him on the spot. For the first couple of weeks I played this, I’d just break up on the spot because if they cannot appreciate my style and self-expression, they can’t appreciate me, godamnit! After awhile, I decided I was going to take a break from guys, and my avatar became strictly bi-sexual, meaning I would flirt with male film-directors / club promoters, etc., but I only went on dates with the ladies. I still hate dating the ladies, though. You could have an amazing date, but if you don’t take them out every single day, they call and break up with you. I don’t have time for that!! I have like 7 photo shoots a day, plus club appearances, I don’t have time to go on a date every single virtual day. This is probably why my “Love” rating in the game is abysmal. 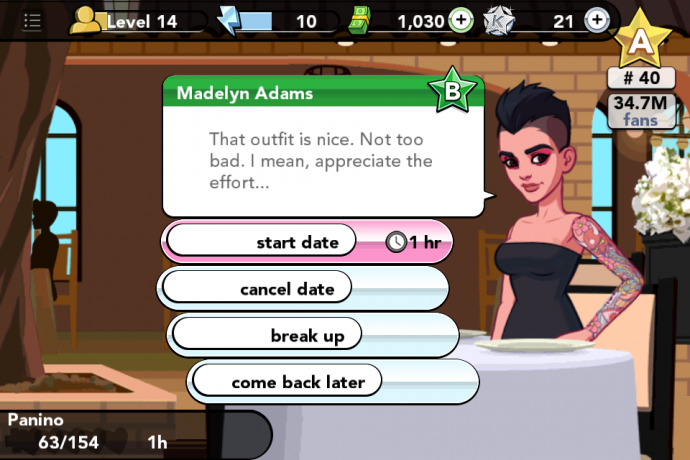 My most recent ex. She’s a bitch, but she was so hot. #nofilter

I’m not the only one that has frustration with dating in the game. I’ve read some articles online by people that are like “I quit playing because the dating system is SOO messed up!” or “This game shames girls / rewards being an asshole!” I guess this ties into the larger beefs people have with the game, which are mainly 1) all the non-human avatars are assholes; 2) it’s very superficial and promotes wanton consumerism; 3) there are vague undertones that do not align with feminism; 4) It’s Kim Kardashian probably getting a lot of the licensing profits of this (free) game (ed note: ahem), which the girl definitely doesn’t need.

Here’s my issue with all those issues: It’s a fucking game. You don’t see moms protesting Candy Crush because it promotes unhealthy eating habits or denouncing Bubble Witch whatever the fuck because it promotes a Wiccan lifestyle. Nobody seems to get mad at the lack of environmental-consciousness or crime against animals in “Frogger,” or the way Miss Pacman eats her friends. Hell, you don’t even worry about the violence or Italian stereotypes in the Mario franchise because GAME.

So why are we placing such high standards on Kim Kardashian Hollywood? Undoubtedly, because it’s a game with Kim Kardashian’s name on it. Like I said, haters gonna hate. When you play, you agree to all premises of the game – that clothing is prime, needless shopping is the goal, superficial jobs are careers, etc. It’s not like a pacifist picks up the controller for Halo and decides they will continue to be a pacifist. No. They shoot everything. If you’re gonna pick up your iPhone and play this game, don’t pretend you’re above the rules. And if you’re like me, a proud feminist that finds, hey, maybe I like playing this game where I am rewarded simply for looking hot at photo shoots, it is okay, because this is a fucking game, people.