“I’m Nobody! Who are You?” The Life and Poetry of Emily Dickinson @ The Morgan

The first thing you see when you enter the Emily Dickinson show at the Morgan Library are, literally, the flowers of spring, preserved in a book. It’s Emily Dickinson’s Herbarium, her first book, a collection of over 400 neatly labeled flower and herb samples from around Amherst that Emily began collecting when she was nine years old. Next to the book, which is behind glass, there is a console where you can digitally scroll through. On each page there are 3 to 4 native plants, arranged on the page with an exceptional eye. One can’t help but imagine how instructive it must’ve been to the young poet; looking for, finding, and then arranging so much flora all summer long. And because this is a book put together by Emily Dickinson, you can’t help but see each arrangement as original source material for the later poems. “Not ideas about Things, but the Thing itself.” 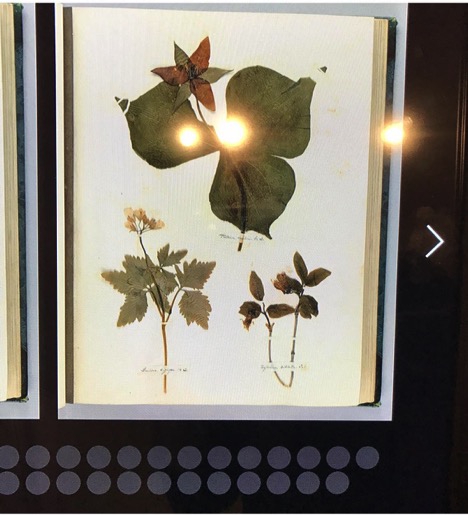 The visual presentation of the flowers sets you up for the visual presentation of the written poems on the page lining the walls of the gallery; the way the writing is arranged, the flourishes of the handwriting and the way the poems are framed (there’s a poem about a house on a piece of paper shaped like a house). You can even focus on the visual arrangement of syntax thanks to one of the last pieces in the show, by the contemporary poet and artist Jen Bervin, which highlights, via embroidery on fabric, just the punctuation in a particular Dickinson poem, the words removed.

As you walk around the room parsing the handwritten poems on the wall you can listen to poet Lee Ann Brown read them on headphones provided by the museum. Brown’s nuanced readings, in her soft southern lilt, give a warm underpinning to the poems. A beautiful singer herself, Brown is a good choice to usher the ear into the show. Dickinson brings both a painterly eye and a musician’s ear to her poems, and each are essential to the full impact of the poems. The synaesthesia between the two senses can be revelatory. One sense suggests the other, and both point, paradoxically, to that extra-sense in Dickinson, the sense she finds inside of absence, the transcendent “Nobody” of the show’s title.

I kept getting caught up in the details of the poems and found it hard to move through the exhibit in an orderly fashion. A Dickinson poem is so much about the details, often well hidden, and the subtleties to be found there. Even the smallest detail can open up a world of meaning. Emily mentions in a letter to Thomas Higginson, exhibited in the show, how a poem of hers that was printed without her permission had been “defeated by the punctuation.”

One detail that stopped me cold was a reference to “Endor’s Closet” in a letter Emily wrote her nieces. This letter is a masterpiece of materteral advice:

I hope you are having superb times, and am sure you are – for I hear your voices mad and sweet – as a mob of bobolinks.

I send you my love – which is always new for Rascals like you, and ask instead a little apartment in your Pink Hearts – call it Endor’s Closet.

If ever the World should Frown on you – he is old – you know – give him a kiss, and that will disarm him – if it dont – tell him from me,  Who has not found the Heaven – below – Will fail of it above, for Angels rent the House next our’s, Wherever we remove —

(When your first experience of reading this letter is in Emily’s handwriting, it’s painful, in comparison, to look at it here in type. One can see clearly why she did not like to see her poems “in print” and why, in turn, braving the elements for the opportunity to read them in person at the Morgan is the best way to go.) 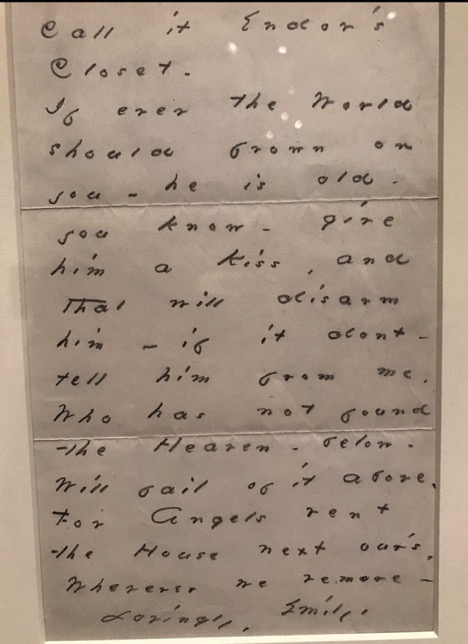 I wondered what Endor’s Closet could be? The only reference I could find for Endor on the internet, aside from its current usage as the planet of the Ewoks, was a biblical reference to the witch of Endor. From Wikipedia I found out, “Saul, the king of Israel, seeks wisdom from God in choosing a course of action against the assembled forces of the Philistines. He receives no answer from Yahweh. Having driven out all necromancers from Israel, Saul searches for a medium anonymously and in disguise. His search leads him to a woman of Endor, who claims that she can see the ghost of Samuel rising from the abode of the dead. The voice of the prophet’s ghost, after complaining of being disturbed, berates Saul for disobeying God, and predicts that Saul will perish with his whole army in battle the next day. Saul is terrified. The witch of Endor comforts Saul when she sees his distress and insists on feeding him before he leaves.The next day, his army is defeated as prophesied, and Saul commits suicide.”

If I’m getting this reference right, Emily is identifying here with the witch of Endor; a medium who reveals the future, however uncomfortable it may be. The witch is working in opposition to Yahweh, but not without compassion for Saul. It’s a revelatory self-perception, all packed so tightly into this one allusion, in this one little closet, which is in turn so lovingly placed inside the wild Pink Hearts of her nieces.

There are several rare wonderful pieces like this one in the show which you would have a hard time finding elsewhere. Here’s another one, lines on a fragment of course wrapping paper. 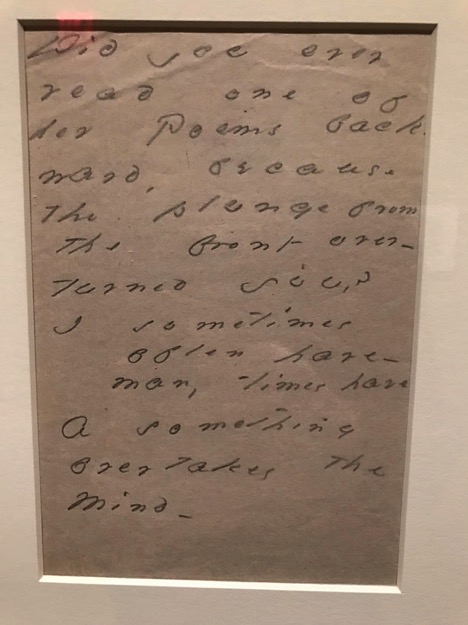 Something overtakes the Mind. We don’t know which poet Emily is referring to here, but it might just as well have been herself. It’s an uncanny description of what happens in her own poems.

The last thing you see when leaving the exhibit is an exquisite family portrait of Emily with her brother and sister by O.A. Bullard. Ten-year-old Emily is holding the Herbarium in her hand, open, the flowers within spilling out from the pages of the book. It’s as if the literal book of flowers that appeared when you entered had, throughout the course of the show, transformed into a figurative book of flowers by the end, like a pair of bookends. The look on young Emily’s face as she holds open her herbarium for the viewer is chilling. She has a knowing look, as if looking into the future, as if she could see us here looking back, witnesses to the revelation of the book in her hands – the flower spilling over – as if she already knew her vocation as a medium.