“I Cannot Enter Her”: On Search & Escape in the Book of Mutter 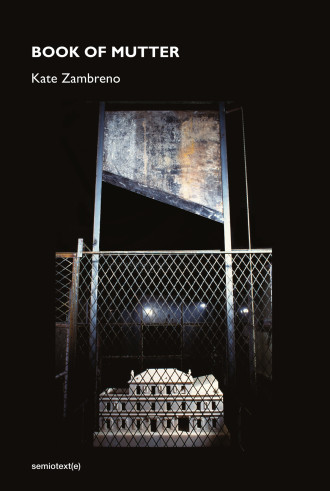 When we reckon with the past, the wide long history of art and artists still seems to be the place to turn for insight. Throughout history, art has had triumphs and failures — perhaps more of the latter. But even after so much failure, art won’t shut up, isn’t still, still speaks: to art, to ourselves, to the past. This dynamic opens a space for dialogue with our own histories, the kind we need and cannot have without the framework of artifice, without the careful diorama of work, of family, of childhood.

Few writers I know take this task more seriously than Kate Zambreno, and none that I know weaves more disparate strands together to build new upon old and call back down the years for clarity or sometimes, a wry nod to the slippery notion of some objective truth.

Her latest, The Book of Mutter, is an essay full of other people’s art as well as her own; but just as often as citing or supporting, she is rejecting other arguments, she is measuring her own methods against the methods and motivations of the others who’ve been here before. Their insight provides some light, but the dark is still primarily Zambreno’s to wrestle with. 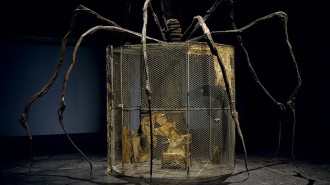 Take Louise Bourgeois, for example. Zambreno strikes up a conversation with the artist’s Cell, a replica of her childhood home. But the artist’s problem is just opposite of Zambreno’s — she wants to forget the past. “I’m a prisoner of my memories,” Zambreno quotes Bourgeois. (But then, of course, later, we discover – so is Zambreno – this doubling back around a hallmark of her work.)

“Don’t look back or else you will be consumed,” writes Zambreno, echoing the lesson of Lot’s wife. Instead of looking back, Zambreno attempts to solve the puzzle of memory and mother sideways, diagonally, sliding pieces of the past around to make a fractured, shifting whole.

Zambreno’s imprecise, fluid, shifting memory of her mother adds dimension here. She feels much of what she knows about her mother is guesswork, or is distorted by the pain of experience, by her mother’s illness and death, or by her own difficult adolescence. Her mother haunts her in some capacity. She describes Barthes, on the death of his own mother: “She is everywhere by being unable to be located.”

In this same way, Zambreno finds herself locating her mother everywhere and nowhere, in totems and relics, in the orphaned Henry Darger’s mother-want, in other women whose lives have become more symbolic than specific.

As with all her books, Zambreno’s sharp and stylish intellectual masonry, her careful gathering of evidence, is a kind of (intentionally) incomplete catharsis. She collects anecdotes like novelist David Markson, but unlike him — he of the impersonal (and emotionally devastating) story — she builds an altar to her own past, these anecdotes both personal and yes, sometimes political.

The contents of her mother’s purse in the hospital: “a used tissue; a sample hand lotion; a lipstick never used; a wallet without money;” then a few pages later, the inscriptions on the hat Joan d’Arc was forced to wear at her trial: “Heretic, Apostate, Relapsed, Idolator.” Collections of words, of objects, of Sylvia Plath with her head in the oven, of electroshock therapy and Barbie Dolls and Gertrude Stein’s Tender Buttons. William Gass, she says, “described these divisions as things external to us, which we perceive, manipulate, and confront, things which nourish us, and things which enclose.”

As in the pieces of Bourgeois, everywhere the diorama rooms are constructed, are filled, are emptied, and the search continues. Objects and stories fill space.

“I was now the mommy,” writes Zambreno, “there was not much left of her.” She tries, after her mother dies, to use those objects, to recreate the past before she was even born. Proust’s madeleines made time-travel machines: “In the years afterwards, I began to sneak home souvenirs.  A black skirt with three fading gold buttons on the side. It doesn’t fit me…A skirt I have never seen her wear, perhaps from her secretary days before she met my father, when she was a young single mother, those hard days occasionally alluded to, days of tomato sauce on crackers. I can taste the salt of my mother’s past before I ever existed.”

So much visual texture is layered throughout the book. A picture, of Bertolt Brecht’s Mother Courage in her famous silent scream. Images in mirrors. Carl Theodor Dreyer tasting his Joan’s tears during filming. (God, is this really true? Note to self: rewatch, rewatch that film.) Old photographs. The contradiction of construction, construction, and all this remembering — and then this, halfway through the book, “I am like Louise Bourgeois, a runaway girl.” Is all this construction a means of escape? An escape artist’s elaborate setup? A house of mirrors, designed to lead one out, and out, and only out?

“Even now,” she says in another place, “I cannot make language do what I want it to.” The impossibility of the book we’re reading now. This is a sad and hard and beautiful book, Zambreno’s impossible book of mother. It’s all the more sad for being a long and impossible project, and all the more truthful and real for that admission. “My mother is the text,” she writes. “I cannot enter her.” Toward the end of the book, she writes, “one learns to hide oneself from one’s mother,” but the statement may as well be two-way: we learn to hide ourselves from our children as well.

Jamaica Kincaid, in her own Autobiography of my Mother, writes: “The past is a room full of baggage and rubbish and sometimes things that are of use, but if they are of real use, I have kept them.” But the ritual of reconstruction, of gathering the rubbish and baggage as well as the useful, of sorting and meditation and yes, keeping – this is the work of daughters, of children, of survivors.

This is the work that Zambreno does so honestly and lovingly here, and it is a worthy tribute to both her remarkable mother and her own remarkable journey through the myth and maze of memory.