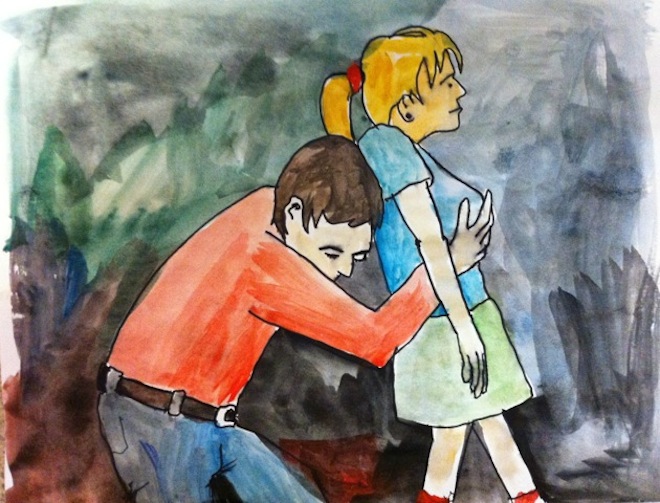 By the time my daughter came of age, the economy was so bad that it was cheaper to hire someone to hold her breasts up than it was to buy her a bra. We put an ad on Craigslist and decided Mark was the best fit for the position. We set him up in our backyard with some water and a shack. He would get up every morning at the crack of dawn and stand outside her room and wait for her to rise. When she left the house, Mark hunched over and slid his hands underneath her shirt, cupping my daughter’s small breasts gently. He scurried behind her, head tucked down, providing the best support that any parent could ask for. He was an older gentleman who, if the times were different, would have been just over the age bracket of a young professional. I believe he sent the money he made working for us to his parents.

Mark’s solitary flaw as a breast holder was that he was only useful short-term. The hunching and cupping gave him severe back problems that eventually prevented him from working all of the necessary hours. In our family finance meeting, we reasoned that the lifespan of a breast holder was similar to that of a laptop—after four years their efficiency slowed until inevitably, they crashed, and were no longer of use. Mark crashed the day his riddled arthritic hands formed tight fists that couldn’t hold anything, let alone my daughter’s precious breasts. We replaced Mark with Evan, but kept Mark on for a short time so he could train our new hire. The two of them, Evan and Mark, could be seen before dawn in dutiful practice—hunching over in the dark, cupping air and pacing the length of our lawn. They walked in long lines and then stood still for fifteen minute intervals, testing their conversation support stance, and would finally end their predawn training session with a brief cupping jog meant to simulate my daughter’s commendable routine of exercise. After Evan’s training was complete, we brought Mark back to the place from which we had picked him up—a small hillock several miles outside of town. As we drove to drop off Mark at the hillock, my daughter’s new breast holder, Evan, sat in the back seat, reaching around the sides of the front seat to put his hands under my daughter’s shirt and support her. When we arrived at the hillock I had to put the car in park to let Mark out. His hands had become so clenched that even pulling open the door handle was beyond his capabilities. Once outside the car Mark dropped to all fours. As I climbed back into the driver’s seat, Evan voiced a heartfelt request to briefly lapse in his responsibilities. I gave him permission to do so, and he pulled his left hand out from under my daughter’s shirt and waved to Mark as we drove away.

Rita Bullwinkel’s writing has appeared or is forthcoming in NOON, Heavy Feather Review, Paper Darts, The Brooklyn Rail, Two Serious Ladies, and the book Gigantic Worlds: An Anthology of Science Flash Fiction. She is currently an MFA candidate at Vanderbilt University in Nashville, Tennessee.