Heads of Wild Flowers: An Interview with Grouper’s Liz Harris

I’m standing in my kitchen listening to Paradise Valley, the latest self-release from Grouper’s Liz Harris.

The two new songs, “Headache” and “I’m Clean Now,” stream out sad and simple, shimmering, iridescent. A combination of heart-wrenching and stunning, the chords and melodies emerge as if up out of a strange new water.

For the next week, the two songs become my bedfellows, humming in my head, under the white of my skull, the lyrics streaming and over and over:

My mother once told me
She walked into the ocean

To listen to Grouper is to be haunted. I always find myself describing the songs as something recorded within a cloud. Harris feels more like an artist than a songwriter in the sense that her songs leverage space — quietness is amplified, there is often an absence or subduing of big sounds, a quiet entering of the room. Lyrics are fogged, but once decoded, bittersweet and poetic.

Paradise Valley is released as a limited edition 7” today, alongside a re-release of the critical Ruins. I spoke with Harris via email about the new songs, self-releasing the records, and ache.

SARAH ROSE ETTER: The thing that is jumping out to me about Paradise Valley is the ache — sometimes, it feels so overwhelming when I hear your music, that bittersweet ache. Do you define it that way? Does it hurt to write something so beautiful?

LIZ HARRIS: It feels good to write when I feel that stormy. I am usually feeling my worst already when I hear songs. When I write the ache is released. The music helps me figure out why I feel bad. I often don’t know why, can’t explain it in the moment, just feel horrible; especially if I’m around other people and am worried about them then feeling horrible.

Instead of focusing on some emotion I can’t describe with words, can’t do anything with, I focus on crafting a piece of music. It gives me a way of sharing something I couldn’t say with straight words, and potentially a way to make someone else experiencing the same thing feel better.

Your work always seems to leverage a negative space. With Paradise Valley, the songs sound a bit like the light streaming in. That also seems reflected in the cover art — the brightness, the color.

You’ve also spoken about other albums as storms of certain emotions – pain, nihilism, sleeplessness. What context would you ground Paradise Valley in? How do these songs feel different for you?

I think of it more as a dialectical relationship to negativity. Present, in perspective.

These records arrived the day after the election. Their meaning changed for me. Initially I thought of these as simple, sad songs. As I held one in my hand I instead noticed, felt glad for, the bright color; image of the sun, noticed instead points of light in each song.

“Headache” is about grief, but also survival and resilience. “I’m Clean Now” finds an appreciation of failed love by re-describing it as landscape, without judgment. Not a celebration of loss, more pagan / feral; an acknowledgement of its power. Wind passing through a valley, shaking heads of wild flowers.

Why did you choose to self-release Paradise Valley, alongside a reprint of Ruins? Is there a freedom in the self-release that’s appealing to you?

I love the process; it makes me feel good to have a routine, some control, a craft. It must relate back to where I come from as a print maker and artist. Have always been more comfortable with sharing those skills than I am sharing sound. So, it’s a less stressful part of making music; that is one reason I cling to it.

Feels good to be protective of this music and my relationship to it. Freedom to go as slow as I want, meter the weight of it in hand, disregard the name and figure a little, focus on the resonance of the final object, choose to do less promotion. Self releasing does not allow big quantities to be made. And it takes more time. More attention is needed. I like that practice.

Your work tends to create air when I hear it — there’s a lack of “big” sound, but in the quietness, a genius petals open. You’ve called the process similar to secretly trying to sink a heavy object into a lake. Does that hold true for Paradise Valley?

Think I always prefer for something to enter the room as quietly as possible. Especially something like this 7”. These are small songs, fragile build.

Frequently, patterns and rules seem to guide your process and work. Did any of those patterns or rules hold true for this release?

Any device that highlights and plays with the fact that something else is in control, coming through, fascinates me. “I’m Clean Now” was made that way. The music ends up somewhere I couldn’t have gone intentionally, the way it wants.

How many songs did you record before “Headache” and “I’m Clean Now” emerged as the pair for Paradise Valley?

Can you talk about revisiting Ruins for the re-printing? It’s such a critical album.

To be honest, this version was made when the original pressing came out. I just didn’t have it together to put it out then. I listen obsessively to things when I’m working on them and then once they have come out never again unless I hear it accidentally or have to remember how it goes for a show. Makes me wince. Especially something like Ruins, which feels so careful and tense. It isn’t enjoyable to go back there. 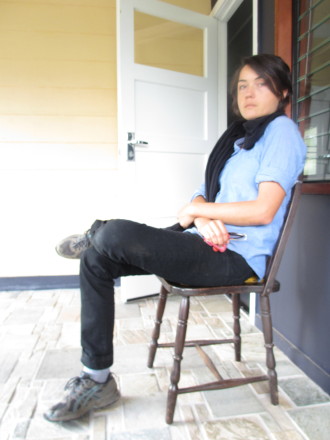 When you wrote Ruins, it was in solitude, mostly in Portugal. Did location impact Paradise Valley? Was it also recorded in solitude?

Well, I guess most of what I record is in solitude. I was partly in the company of friends when I made these songs.

While visiting Australia, Lawrence English, his partner and new baby and I piled into a car and drove to the Bunya Mountains. I stayed for a few days there on my own up the road from where he and Rebecca and Frankie were staying.

In your songs, quietness almost hangs over your voice like a cloud — there feels like a bit of obstruction there, in a very foggy way. Is that how it seems to you while creating it?

I don’t usually remember how I felt while recording. The moments before and after maybe, incidental features. Sometimes no recollection whatsoever later on of the circumstances. Cover the Windows is a complete mystery to me; I have no memory of making it.  I remember listening back to the songs once RS put them out, but not making them.

How does a song come forward for you? Is it a single sound, a hum, then the rest? I’m so curious about how your brain begins and builds these albums. Do they function within a connected web?

Almost always music is something outside myself that tells me what it wants. I do very little to generate, but do put a lot of energy into trying to help them to exist once they have come into the room. This can fill me with a sense of dread anytime I am too exhausted to stay open, this immense sense that I am letting music down vs. the immense feeling of being drained by it.

Sometimes the process also leaves me feeling like an impostor. Fielding questions about the music, I feel nervous. It’s as though this is someone else’s work, and it isn’t right for me to say anything about it.

Being near water is crucial for you. I feel the same way — magnetized to large bodies of water, the strange comfort of being physically near the lull. Did any body of water influence this album?

The ocean, near San Francisco. My mother described being hypnotized by it once, walking out into it. “Headache” is my mother’s memory overlapping with my own interpretation of personal loss, the wish to remove, but eventually instead being led by that same body and impulse back to shore. 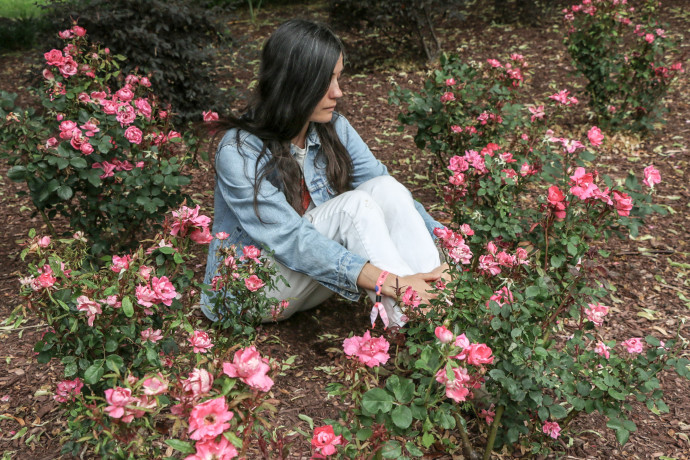