Haute Surveillance as The Real Thing 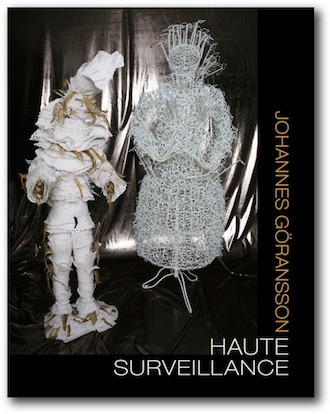 “Sometimes it happens that I have a thorn”

Imagine that you are on a secret journey through the life of Jean Genet, through the shifting framework of a character made by Johannes Göransson. And imagine that you get to the middle of the story, with all its twists and turns through culture and theory touchstones, through the grail-like quality of “having been found,” somehow alive. And then you find out where you are: “The finale: My father’s mansion has many exit wounds.” It’s like you are in a modern jungle, so to speak, something to be salvaged, and eaten, at the same time. You are a teenage virgin, the marriage of pornography and Art, which will, in the long run (as many Woody Allen movies suggest) turn you into a Dictator. Everyone, it would seem, is interested in “History” here, in a Marxist sort of revolutionary civil-war-cum-bombing of the soul. Imagine that everyone is a “softcore spiritualist,” and that the sun is about to cover over all that’s ever been known of land, though there is, oddly enough, no land here.

Imagine, too, that you are in a world where “shangri-la politics are based on ecstatic anorexia,” and where your “demeanor is based on [your] mash-ups of various hit songs.”

Now, you’re getting into this book, and it’s not quite letting you escape. With its cross-genre eschewing of plot and character, it hums with, well, “infection.” It mixes up temporal moments to make them more fragmented and migratory, and the plot thickens and percolates, for what seems a (well) eternity.

And then you find out (in Göransson’s more “transparent” axiom) what you’re looking at, hearing, being subject to:

“The interiority clearance: you can have it for free once it’s poetry.”

It’s a museum, where “I’ve become evil because language gets in the way.”

It’s a B-movie where “the human body becomes more beautiful and less a subject.”

You will discover that “Perhaps it’s an aesthetics, not an ethics.”

And there is trauma there. It’s an emergency, a state of emergency. “The trauma saturates the mansion, it’s a trauma-rama.”

And perhaps you will identify with Göransson’s wind-swept narrator, who says of the place: “It is written all over my face: I’m on the clock clock clock clock.” This clock is Hardy’s Father Time, perhaps, who doesn’t quite have “the time,” but is working on something, and what is this, really?

Does The Woman perish, eventually? What became of the Starlet? Are any of these characters real and believable, in our daily lives? Who are the characters, and what are their relationships to one another really about? (We never really find out.)

It’s tough to say, and there are turns and twists to the tale––this Deleuzian maelstrom of vagrancy and media saturation—that keep us guessing.

Is this book a mirror, perhaps? Perhaps. Find in it what you will, and don’t forget to take a little humor to it, a wee grain of salt.

Haute Surveillance is available for pre-order through Tarpaulin Sky Press, and will be published May 1, 2013.