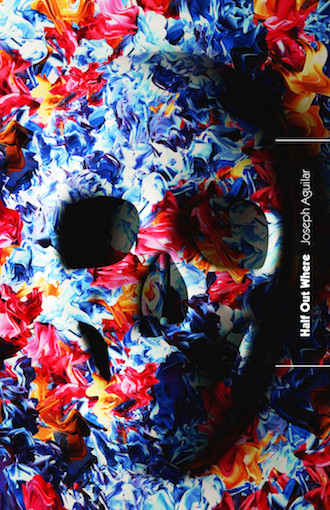 As you proceed through Joseph Aguilar’s Half Out Where, you might hesitate a bit, thinking that maybe Aguilar has picked up his bat and ball and walked home, leaving you and the team with nothing but fragments of memory about a nebulously shared past. That’s not quite right, though, because as Half Out Where proceeds, two things become clear;

1) the book stands there and shrugs, never leaving, and

2) you can’t really remember the game because there never was a bat, nor was there a ball.

I’m torturing the metaphor here to get at the essential quality and greatest strength of the very strong work; you’re not so much haunted by a past in the book as you’re haunted by an almost, by possibility, by a combination of suggestion and reluctance. The book’s pieces aren’t quite easily defined as either poetry or prose, but what they do, in cyclical refrains of a quiet collection of ghostly people, places and things, is offer you evidence. The great thing Aguilar has pulled off here is the “trick” in that he gives you a ton of evidence to consider, but you’re never quite sure, reading the book, of evidence of what.

The book opens with prose poems that almost adhere to a fictive spine but ultimately just orbit it; the later more succinctly prosaic sections later on in the book offer you some sense of what and where. But, sentence upon sentence, prose slides freely back and forth between fiction’s organized communication and poetry’s sly play. The best evidence of how you get the feeling that although you may be holding a book you might not actually be reading one, are some prose poems about halfway through the book in section called “Transient Meadow” that stare down the 21st century’s torrid love for parataxis and shoves it until it breaks:

I get nostalgic for. I face mass shrugs. Eat a luncheon with. So many who can’t. Filter backwater from. Wallow of your guilt. Say crying is for. Sleep half in the. Half out where the. Gear the grease brown. Form a bubble. Lunatic or. Fingerprint or. Vagary.

So, just to take, “Say crying is for,” from the above: what’s great about it isn’t that the “for what” is just lopped off, if that’s how the sentence would even end, or that crying is even the subject of the sentence fragment; removing the final word disorients the otherwise quotidian words of what came before it so it has the same general effect of saying a word over and over until it loses its meaning. Lopped as it is, “Say crying is for” isn’t just a command to explain crying that got left unfinished; instead, it sits a little bit further away than that, just about within reach but not quite. Because: why “say” in this sentence and piece, and same for “crying” and “is” and “for”? Aguilar’s elliptical minimalism stops you in your tracks in your hunt for Literary Meaning and forces you to consider a more pleasurable and less common question: the basic “what the hell does this even mean?”

This is an important question because it defamiliarizes language; it does the Poundian job of making-new via some superficially simple reluctance. Imagine this spread throughout the whole first two-thirds of the book in fragments like the above into which are threaded recurrent, seemingly unrelated motifs like a landlord and a ditch, and you have a pretty gloriously wide field to run around in, happy not that you know where you’re headed (you don’t), but that, as an increasingly rare case in contemporary poetry or prose, you have no idea where you really even are.

If the book has a weakness at all, it’s in the prose pieces in the book’s final third. A book of them on their own would be great, so here they suffer only by comparison to the wildness and wilderness of what came before. The same alien truncation is present in the often brief, ephemeral stories, but the problem (and it’s not too much of a problem) is that whatever’s “alien” gets muffled a bit by signposts we can all read clearly: narrator, characters, places, dialogue, beginning/middle/end, and sometimes even something amounting to plot. Which, again, isn’t to suggest that they’re not good, just that they’re not exciting as what preceded them.

But the shorter pieces in particular have their own charm, as in “Husband Descending a Staircase.” It’s hard to make out in the story’s two short sentences anything as literal as actual staircase descent, but what you get is the corporeal physics of the “husband’s” body in space, a body, the narrator says, “yielding to what would carry it to its end.” Here as with the poems, what’s omitted is what’s important; although the story’s title references both a husband and a staircase, the actual story doesn’t go anywhere near either, much less offering the reader a way to connect title to story, so we can infer that the character being described is a husband, and that what he’s doing with his body involves the steps of stairs, and that the narrator watching him is, probably, his wife.