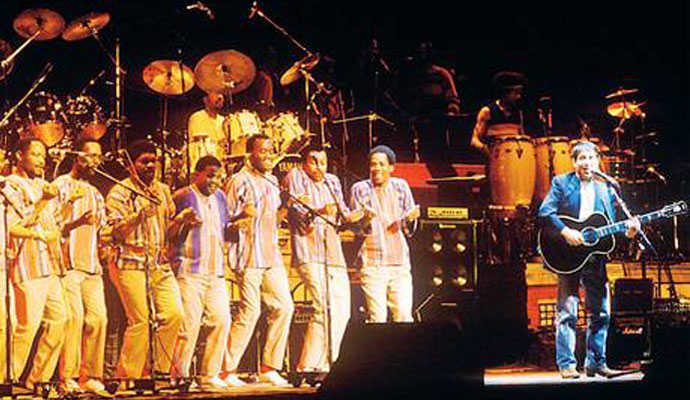 I was sitting on my bed, knees to my chest, in a room I’d only started renting a week prior. All of my possessions used to fit inside my 2006 Hyundai Sonata, but with this move I had also rented a 10-foot moving truck for a bed, a desk, a chest and a few shelves. Despite only having a coat closet for clothing storage, everything was in its newfound place. And so when he came over for the first time after the move, my boyfriend nodded at the Carole King and Vietnamese soul records now on display––on top of a painted fireplace, no less––and deemed the arrangement as Pinterest-worthy.

I felt trapped, as if obligated to stay in a hotel room. I remembered I had to schedule a doctor’s appointment. Being as old as the album itself (I turned 26 on June 2), I would soon be kicked off my mom’s health insurance.

I was facing the desk at the corner, my new home office for the 60-hour workweeks as a freelance writer. And instead of reading press releases, I was listening to Graceland for the first time. Haunted by his unraveling relationship with actress Carrie Fisher, Paul Simon sought a way out from the day-to-day life he now had to navigate without her. So he left––not for Nashville as the title track suggests, but to South Africa––and at a moment’s notice, at least as implied by past issues of Rolling Stone. According to The Guardian, Simon didn’t even feel obligated to ask for governmental permission, as the United Nations had issued a cultural boycott against the white-run apartheid state.

As the first accordion notes and then snare strikes of “The Boy in the Bubble” resounded, I suddenly remembered how my skin had darkened several shades (from “Natural Buff” to “Honey Beige,” according to Maybelline) after days if not weeks of living out of a carry-on suitcase. I was briefly visiting Hanoi, Vietnam, and Santiago, Chile, as a part of University of Maryland study-abroad programs. And in those days, if not weeks, I mostly walked and took in the smallest signs of life––hushed prayers inside the ancient Temple of Literature, louder but sparse protests against a recent decision by President Bachelet, the first whiff of beef broth that had simmered for hours.

These sights and smells reawakened me just as South Africa’s bustling sounds seemed to fortify Simon. But as Graceland makes clear, he couldn’t chase these regional bands and styles––mbaqanga, or “township jive,” and its precursor mbube among them––without also towing this hefty self-awareness that his life, seemingly scripted by Woody Allen, could be far more difficult to bear. He chats up a woman who somehow recognizes him from a cinematographer’s party, one who he thinks recently won a Fulbright. He describes a boy who tries to distract from his ordinary shoes with aftershave. But first, he catches glimpse of the soldiers on the side of the road.

In retrospect some have misinterpreted these mentions of a Manhattan life as appropriate for a dinner party soundtrack––music for wealthy white adults. But when I listened to “Gumboots,” I drew my knees even closer. The Boyoyo Boys instrumental of the same name, bright and invigorating by itself, kicks off and then actually accelerates Simon’s snowballing recollection of an emotional breakdown––her reasons, apparently, for breaking up with him. In this rush Simon casts out a proposal as a last resort, and it certainly isn’t romantic: “Why don’t we get together and call ourselves an institute?” I buried my face into my knees.

Now I could hear Simon’s wistfulness far more clearly, the way his shining voice breaks with every nearly-bumbling rush of a chorus: “You don’t feel you could love me / but I feel that you could.” I tried to recall how many times my boyfriend took me to brunch, for this one breakfast bagel sandwich in particular, to make up for an hours-long argument extended by tears and jeers. I looked up and around my room and tried to count the number of furnishings I’d acquired since I moved to Atlanta two years ago: decorative pillows, matching sheets, throw rugs that I once thought would help me settle and feel more at home.

Then, the souvenirs: Press passes dangling from my doorknob. Photo albums of my mom’s visits. A pocket-sized planner from my college roommate Sarah. The Vietnamese soul vinyl, from the first Record Store Day my boyfriend and I spent together. (He purchased The Sunset Tree by the Mountain Goats, and maybe even Kaputt by Destroyer.) My copy of Shadows and Wind: A View of Modern Vietnam, dog-eared with still-relevant observations despite being published in 1998.

Last night I crashed at my boyfriend’s place. Before I came over, I’d called him twice in groggy panic, the type only that a 12-hour workday could conjure up. The first time I called him, I told him that I’d only managed to finish half of what I needed to get done, so I was gonna try completing just one more task before I came over and crashed, probably as soon as he cued up the latest Game of Thrones episode. He said he’d wait.

A few days prior I told him that I listened to Graceland for the first time. “Ah, it really is a fantastic album. I need to give it a re-listen,” he said. “Never was the biggest Paul Simon fan; that was mostly my mom’s department.”

“I don’t think I would have liked this before I turned 25, you’re right,” I said. Then, instead of tending to my inbox, I watched the 1987 live performance of “The Boy in the Bubble,” in which Simon even playfully shields his eyes as he sings of a bright light. Every pluck and toot and whine can be heard with even more clarity, and Simon’s voice seems to float above it all. By then, and then more than 20 years later, Simon would sing again of these parties and that one taxi cab ride and diamonds somehow on the soles of his shoes. But as these rhythms taught him to do years ago, he’s long since left those memories behind.