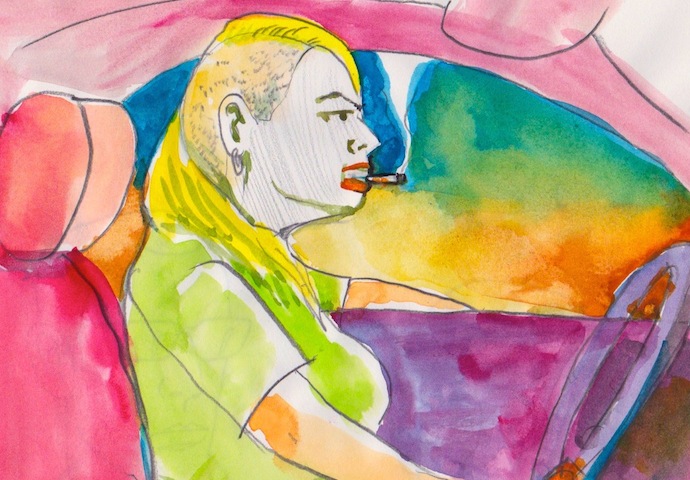 Perry and Baby Girl were in the car they’d stolen not half an hour before. A red Mazda. Looked fancier than it was, had to use hand cranks to put the windows down. Perry gathered it probably belonged to someone who wanted to look fancy but couldn’t squeeze enough out her sad rag of a paycheck. Like how for years Myra, her mother, kept a dinged-up Corvette because it was red and a two-door. Couldn’t even get the tiny trunk open without a crow-bar. Then Jim came along with his logic and calm and sense and had it scrapped. Myra drove a mint-green Tercel now. Four doors. No dings.

Perry knew the Mazda was a woman’s car ’cause of all the butts in the ashtray, all tipped with lipstick. Baby Girl had lit one up first thing, held it between her teeth, squinting through the smoke, cranked down the window so she could rest an elbow. Baby Girl with her half-shaved head, her blond eyelashes, her freckled arm resting on the steering wheel. Fake-ass thug. Sometimes it seemed mean thoughts were all Perry had for Baby Girl, but when she caught sight of herself in the side mirror she saw she was doing all the same shit.

They’d turned onto the busted-up highway, Baby Girl swerving like they were in a go-kart so the Mazda wouldn’t get a flat. The rising sun the color of a pineapple candy, no more than a fingernail at the horizon. Not a single other car to be seen.

Baby Girl was muttering along with the music meandering out of the speakers. You want some / you gonna have to take some / and I’ma get mine. This was her favorite line. Her motto. She tried to make it Perry’s also but Perry was not into that shit.

Perry was annoyed. Tired. Felt like her skin was turning to dough. Her legs and arms and heart, all starting to give in. The clock said 6:25 a.m. Eight hours and twenty-five minutes past when Perry said she was going to bed. She’d have to explain herself to Jim and Myra when she got home. She hated explaining herself, ’cause most of it was stuff she’d have to make up.

She’d meant to do right. She’d meant to stay in bed and fall asleep like Jim wanted, ’cause she liked Jim. But she made the mis- take of opening her window, hoping it would cool her room down. All it did was let more hot air in, let her hear the quiet outside her window, the stillness she could not stand. The windows in the nearby trailers were mostly dark but for the flicker of a television, and it was like she had to do something, something other than turning out the light and closing her eyes and letting the night pass on by, like Myra. She had to make something happen.

And plus she’d got that text from Baby Girl. Lets do this. They had no plan. Just a general desire, like always.

It was easy to creep out of the trailer. Perry didn’t even ease her window shut like she usually did. She knew Myra wouldn’t be able to hear over her program, and Jim had gone to work his night shift at the prison. Even if Myra did hear, it was unlikely she would do anything about it. Just keep sipping her beer and snuggle down tighter under the covers.

Baby Girl had been standing by the pay phone at the Circle K. Her arms moving in that fluid way, heavy and slow, like she was thrashing underwater. She had her music on. When she saw Perry she yelled, “Wadup wadup?”

Baby Girl didn’t care how people saw her. In fact, she wanted them to be afraid. Like how people used to act around Charles, only worse. Once, the greeter at Walmart told them they had to leave if they were just going to stand by the doors acting a fool and not buying nothing. “Suck my dick,” Baby Girl told her.

The greeter lady went red, she held her hand to her mouth and started crying. And Perry wished it was her who’d said it.

Baby Girl pulled her headphones down. Perry could hear a man yelling waka waka waka waka. “I think we should go get us a ride,” Baby Girl said, turned so Perry could see the slim jim sticking out of her back pocket. Her brother, Charles, had made it out of a metal coat hanger before his accident. They’d stolen it from him after. Everything was before and after for Baby Girl now, Perry knew. Be- fore the accident she’d talk about boys, and once Perry had walked in on her doing sit-ups next to her bed. After Charles’s accident it was like Baby Girl did all she could to look hideous. Untouchable.

“Let’s get a SUV this time,” Perry said. She couldn’t drive, knew it was up to Baby Girl to choose what kind of car to get, but she’d been wanting to sit up high like that.

“You are the show-offiest motherfucker I ever met,” Baby Girl said, but Perry knew it was a challenge she wouldn’t say no to.

They went into the Circle K to get the usual. Hot fries and a sweet tea for Baby Girl, Mountain Dew and Twizzlers for Perry. She liked her heart to go go go all night long.

“Where you girls headed tonight?” the man behind the counter asked. He was an Indian-looking man but he had an accent like theirs. Dark and syrupy, twang twang twang. His name tag said Patel.

“Why would we ever tell you that, Patel?” Baby Girl flicked her change, a nickel, across the counter. It hit the man in the zipper. “Oh shit!” Baby Girl exploded with laughter, holding her gut and point- ing, like some of the boys did in the hallways at school. “That’ll keep your ass honest!”

He shook his head, wiped at his pants like the nickel had left a stain. “You are a pretty girl,” he said, chopping his hand at Perry. “You should be at home asleep in your bed with curlers in your hair.” Baby Girl laughed, a grinding dry kind of sound like she was pushing something out her throat. Something else she got from the boys at school. They were almost outside when he yelled, “Ain’t nothing open past one a.m. but legs!”

Baby Girl laughed hard at that, too, but once they were outside her laughter got all swallowed up by the quiet of the night and then what was the point. Baby Girl put her headphones back on. They walked along the road, Baby Girl’s arms moving fast, point- ing, punching, hands forming signs only she knew the meaning to. Perry stepped on every crack she could see in the dark yellow of the streetlamps, something that felt like her own way of saying fuck you to no one.

The night was warm as a mouth. “I think we should hit up the Estates again,” Baby Girl shouted. Her voice quieted the cicadas, but only for a second. Perry gave her the A-OK sign. Wanted to say, Keep it down, dumb-ass, but didn’t.

The Estates was a ritzy-ass neighborhood with a gate at the front and open sidewalks on either side. Perry and Baby Girl had hit the neighborhood before, strolled right in. Those sidewalks were an in- vitation: Come on in, and steal some stuff while you’re at it. Perry had started to think if rich people weren’t afraid of their stuff being taken, they wouldn’t feel so rich.

The last time they were at the Estates, they’d tried doors until they found one unlocked. It was a brick house with a duck wearing a dress next to the mailbox. The first floor was a maze, every room connected to the next. They’d walked around and around, losing and finding each other. There was a picture of an old man and woman holding hands at the beach. Another picture of the same couple in front of the house. Baby Girl took the gold napkin rings she found in a drawer. Perry almost took an old pair of baby shoes frozen in bronze, but then she saw the iron poker next to the fireplace and took that instead, kept it in a dresser drawer, under some T-shirts. Perry took it out once, aimed, brought it through the air like it was a sword. Tried not to feel stupid. Lately it was like Perry could feel stupid faster than she could feel afraid.

When they got to the gate, Baby Girl pulled her headphones down, turned off her music. Took a deep breath, like she was about to say something, but the chimes in Perry’s phone sounded. “Turn that shit off !” Baby Girl hissed.

It was a text message from Jamey. Perry, girlie, where are u? Im online. Perry turned the ringer off, stuffed the phone back in her pocket.

“Okay,” Baby Girl said. “Let’s make a left at the stop sign instead of a right this time. And let’s take the first SUV we see. These mother-fuckers all have two-car garages but someone’s bound to have a third car stuck out in the driveway that we can gank.”

She was right. In front of a yellow house with a rock garden in- stead of grass, there was a huge black Suburban. Baby Girl pointed up. Blue light gently flickered behind the white curtains in an upstairs window. Someone was awake watching TV, or had fallen asleep while watching it.

“It’s on,” Baby Girl whispered. She pulled the slim jim out, worked it into the door. The lock went with a soft pop. For Perry, that pop was an exploding cosmos of possibility. White tails of glitter shooting out. It felt like she and Baby Girl were mirrors reflecting the light from the streetlamps back and forth a million times. They were light. They could do anything, go anywhere. They were light. Tomorrow Perry would be tired, wrung out like Jim would say, but this was why it was worth it. Who else was out at this hour, doing what they were doing, marking every moment, trying to live? No one else. Wake up! she wanted to shout at the white curtains, at all the windows in this neighborhood. Wake the fuck up.

Baby Girl hot-wired the car, backed out of the driveway. And it was just like Perry thought being that high up would be. She felt as tall as a tree.

Lindsay Hunter is the author of the story collections Daddy’s (featherproof) and DON’T KISS ME (FSG Originals). Her first novel, Ugly Girls (Farrar, Straus and Giroux) is out November 4th, 2014.

Lindsay will be reading at the Letters Festival on Saturday night at the Goat Farm Arts Center in Atlanta with Jamie Iredell, Morgan Parker and Jason Koo. Tickets are available here.