Flotation Devices: A Review of The Fun We’ve Had 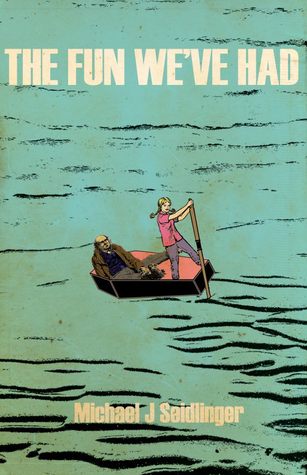 Maintaining a minimalist plot with limited settings and characters who speak in limited dialogue, driven predominantly by a narrator’s assessments and descriptions, is, frankly, audacious. Many short stories have tried to do this with boring or cliched results. To carry this for an entire novel, and to succeed, is a rarity.

The first few pages of Michael J. Seidlinger’s The Fun We’ve Had, while well-written, can make a reader pause and wonder about the progression. But the pages move, the setting is sustained, and a philosophical, artistic journey begins.

The Fun We’ve Had, through sections like “Anger,” “Denial,” and “Fear,” tells the story of a nameless couple going through various forms of tension, disillusionment, and the likelihood of their relationship being on the edge of complete disruption. They are floating in a coffin on a vast ocean, with nothing to get in the way of their private thoughts and complicated interactions. Their alternating narratives are simply titled “His Turn” and “Her Turn.”

Seidlinger’s prose allows the reader to select his or her own interpretation of this heavy metaphor, but once the setting has been established, it allows for an ebb and flow of dialogue and a philosophical exposition that manages to use the situation without making any strained projections. Even when the coffin and ocean are mentioned explicitly, the questions and observations that arise are compelling:

But we try. If you can listen into the sound of the seas, calm and raging, a contradiction based on the billions that populate the depths, you’ll hear us shouting, doing our best to tell our stories.

Holding on, they believe they have that chance.

We push them towards the calmest part of the sea, beyond the dangerous waters, for when they sink.

Eventually we all sink.

To call The Fun We’ve Had a “relationship novel” is to encapsulate everything and nothing, in addition to unleashing a chorus of eye rolls. Yes, the book is about the falling out of two people under unique and metaphorical of circumstances. But the journey itself carries the work as a kind of literary field observation, noting the actions of people in the most extreme circumstances. It is original, yet manages to make its many inspirations work like a true homage, not a wink at the sources (two names that came to mind during my reading were Amelia Gray and Salvador Plascencia, and a pre-publication blurb mentioned Italo Calvino). The refrains of “are we having fun?” and “he, she” are pleasing and necessary to its art form, and not done for the sake of repetition.

Given that the reader doesn’t see this couple in the bedroom, in the kitchen, or sitting at the coffee shop, Seidlinger has a limited canvas with which to work, but his writing is more interested in the psychological and social troubles, even with outside factors brought into the story. Through possible hallucinations, the couple changes gender and ages at times. Sharks appear, but are mentioned with the phrase “The shark was an omen,” a literal way to dispel any claims that the metaphor could be too heavy-handed on its own. However, the tensions that have been crafted make these outside oddities almost an afterthought. Throughout, another refrain makes its presence known: the question “Are we having fun?” takes on absurd yet vital weight, taking a clichéd non-question and crafting it to take on somber, complex tones as the book progresses:

They have met death and will be unable to escape it.

Words propped up like a skyline view in the distance; he observed the sea, waited for the sun to begin to set, before touching her. Sun never set until it was too late, and by the time it did, he discovered what, maybe, she already knew.

He could not touch her without touching himself.

“Are we having fun?” laundered the questions of giving her a hand.

For all of their problems, Seidlinger does craft a genuinely moving story about a relationship. There’s affection on both sides, even if the problems appear insurmountable. Throughout the experimental forms, there’s a genuine affectation the reader feels for these characters. And while the question isn’t meant to be an explicit one like “Will they survive?” or “Will they overcome their differences?,” little passages take on sweet, even old-fashioned sentiments in beautiful ways.

To which his replies were instant, honest, and true:

Through Seidlinger’s prose and his ability to take familiar tropes and turn them into his own form of vibrant storytelling, certain narrative techniques took me out of the story at times. In some sections, unspoken dialogue is marked with enclosed ellipses, giving the text a visual form to accentuate the fictional tension, But the narration occasionally references itself (namely, the ellipses are called to the reader’s attention and remarked upon for their power). This wasn’t done enough to be a serious mark against an otherwise excellent work, but since Seidlinger already proved that he could avoid the obvious and the overused in this book, some of the metafictional elements were too much, especially when this isolated world and narration is strong enough on its own accord.

The Fun We’ve Had is a quick reading experience that doesn’t skimp on making the reader work and reflect on its questions, and its deceptively simple universe. For a first introduction to Seidlinger’s fiction, the balance of the familiar and the creative was carefully rendered to build an unfolding yet generally stable narrative. It’s an easy world to get lost in, and for as despondent as the situations are at times, it carefully moves in various directions, even if one is floating in an open coffin.