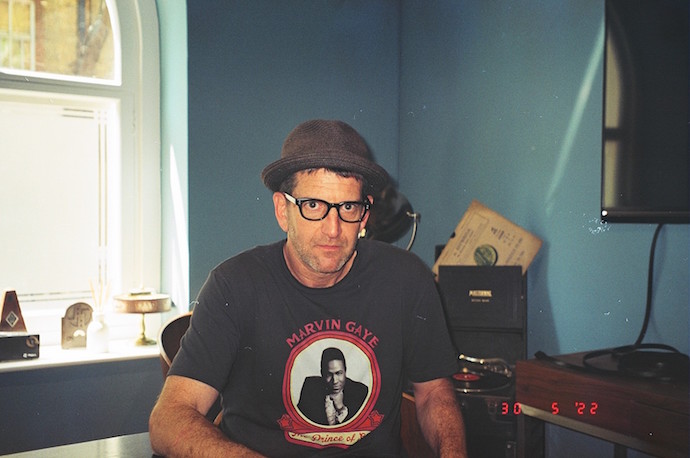 In university, I found JT LeRoy. I wandered into my local bookstore and picked up a copy of Sarah from the staff picks table. I saw blurbs from Chuck Palahniuk, Dennis Cooper, and Mary Gaitskill, and I was sold. I devoured it and then moved on to The Heart is Deceitful Above All Things. The author’s origin story was just so painful and bizarre: a teenage hustler pimped out as a cross-dressed prostitute by his drug addict mother. JT took the pain of childhood abuse and channelled it into something dazzling.

Every few months, to prevent my over stacked Ikea bookcase from collapsing, I pick off 20 or so books to sell to my local secondhand book store. The books that get sold are usually books that I bought on impulse or arduous tomes or novels I’m realistically never going to tackle (I’ve sold and re-bought Infinite Jest three times). When the stories began to emerge of the JT LeRoy literary hoax, it felt like finding out one of your favourite bands have been lip-syncing all these years. I threw my JT LeRoy collection on the to go pile. I was like one of those Metallica fans on MTV News denouncing the band and stomping on their copy of Master of Puppets in protest to the band suing Napster.

I hadn’t thought about JT’s books and scandal in many years, but when I sat down in the Soho House screening room waiting to watch Author: The JT LeRoy Story (2016), I started wanting answers. A dark part of me wanted Laura Albert to be taken to task for all the deceit. Ten minutes into the movie, that feeling washed away. Director Jeff Feuerzeig has done something nobody else has done before–have Laura Albert tell her story–and it’s as haunting, strange, and moving as her books.

Feuerzeig has spent much of his life telling stories of troubled souls and underdogs, such as The Real Rocky (2011), the story of a down and out New Jersey boxer that was the inspiration for Sylvester Stallone. His classic Daniel Johnston biopic The Devil and Daniel Johnston (2005) took a deeply moving look at the life and trials of the troubled singer. And now there’s Author: The JT Leroy Story.

I caught up with Jeff in London to find out how he went about putting such a wild, tangled, and ultimately heartbreaking story to the screen.

Making a documentary feature is such an investment in terms of time and research, how did you decide on this to be your next feature?

I finished The Real Rocky for ESPN 30 for 30 (2011), which I did after The Devil and Daniel Johnston (2005), and I’m always looking for great true stories. A journalist friend of mine turned me onto the story. I didn’t know about it at all. So I read a bunch of articles calling it ‘the biggest literary hoax of all time.’ So much ink had been generated when it broke in 2006. I thought, ‘Wow, I would like to hear from the person who wrote the books.’ I wanted to hear from the person who created all of this fiction, on and off the page. The untold story. I wanted to hear that voice.

How was it for you reading the novels after knowing the full story of the hoax?

I really responded to the books. I thought she was a great writer, and I wasn’t surprised that she had gotten such great literary reviews and gone on to be a bestseller because the writing was very strong. I love Southern gothic literature: Flannery O’Connor, Tennessee Williams, Faulkner. I’m reading Sarah like, ‘This is like an updated wild version of O’Connor.’ I have empathy for anyone who has a troubled life. I just naturally do. I’m an empathic person. So as far as learning her tragic backstory about the sexual and physical abuse. It’s tough not to have empathy for anyone who’s gone through that.

Where did you go from there? Was Laura cautious of doing a documentary? I’m guessing she’s had film offers before?

I reached out to Laura and sent her The Devil and Daniel Johnston. Devil and Daniel spoke to her. The film deals vividly with madness and creativity. So she said, ‘Ok, I’m gonna go down this road with you.’

At the risk of sounding hugely cynical, since Laura is such a fantastic fiction writer and had orchestrated such an elaborate hoax before, was there any concern on your part that she would hijack the movie with her own fantastical retelling? Or even concerns that she was telling the truth this time?

This is the deal: this is a subjective film. She’s allowed to tell me anything she wants to. I spent eight days with her, and we basically filmed in a very linear way. We started with her childhood and just worked our way through to see what happened. She was free to tell me anything she wants, and she was very open in sharing all of her tragic backstory. She was very, very forthcoming about all the deceit; there was nothing where she said, ‘Oh, I don’t want to talk about that.’ She knew this was her chance. I was giving her a forum to tell her story, which she had not told anyone before. I believe she told me her truth. There are always many sides to every story, but I was there to hear her side.

As we see in the documentary, Laura strangely recorded all her phone calls to people throughout her entire life: everything from calling child hotlines as a teenager to JT LeRoy. This must have been a gold mine of material for you as a director.

It gave me an opportunity to make a unique film and create an immersive experience because without those materials it’s very difficult in documentary filmmaking. It’s also challenging to excavate such a massive archive. I went to her home and started to process this massive archive of thousands of photos, videos, Super 8 footage, notebooks, and all the writings and recordings. That seems to be my life. *laughs* Two years work!

Do you think she kept these because she thought one day this would all come out?

I think she did know that because she hid clues in the books that it would come out. That was a surprise to me find those puzzles. She says to Gus Van Sant in the film, ‘I knew… I knew I was writing the fucking future. I wrote a passage in the book where the townspeople find out the boy is not who he says he is, and they’re gonna burn him at the stake.’ And she points to it right there in her own fiction. She put clues in the books, hiding in plain sight. The layers of that are fascinating to me. So to answer your question clearly–she knew one day she was going to be found out.

Did you as a director at any point feel a need to call her out for some of her actions?

No, that’s something I don’t even do in Devil & Daniel, and there’s a lot of pretty horrible things he’s done, and it’s all in the film. But he also makes great art, and I love his art. With Laura, there is no agenda like that. She called herself out. She revealed all of her deceit throughout our interview together. She didn’t hide anything. The books are fictional, but it’s not surprising the source of those themes is not so far from her reality. I know it’s still fiction–she didn’t work at a truck stop–but those themes were her themes, it turns out.

Once you’ve locked on a project how soon are you thinking about the style and look of the movie?

Some stylistic decisions are made early on and some evolved very organically–form follows function. For instance, the idea I felt I had was we were going to do this big interview with Laura Albert, have her break the fourth wall–but I knew the wall should be something unique. So I came up with the idea of blowing up her words, her fiction, and having her standing in front of them–to own that fiction, like it’s coming out of a story book. That was a big stylistic decision. Then later on, she happened to have fantastic Super 8 films from her childhood, which served as back story. The recontextualization of found footage; that’s my playground. 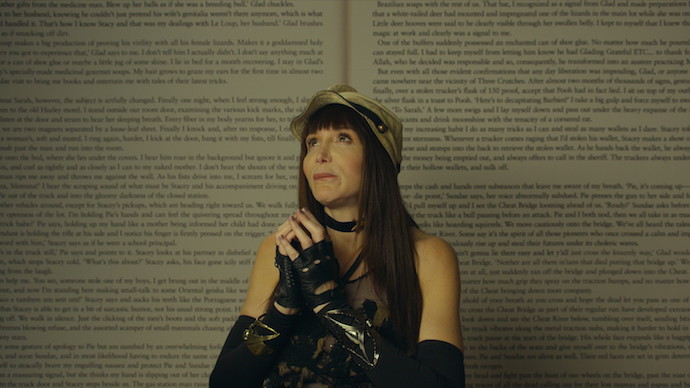 Much of a documentary depends on who is willing to talk and participate. Was it difficult persuading people to talk? I know some people felt betrayed by her.

Everyone was given an opportunity. Offers went out, and some said no. Asia Argento, who directed the film adaptation of The Heart is Deceitful, said, ‘I love Devil & Daniel Johnston, but no thanks. I want to move on with my life; that’s an old chapter I’m making a new film now.’ Gus Van Sant said, ‘I’m not interested.’ There were people who accepted that I just used as research, like the writer who broke the story in The New York Times, Warren St. John. But we had people like Dennis Cooper and Bruce Benderson–both great writers. And publishing agent Ira Silverberg was fantastic. Savannah (Knoop), who appeared as JT in public, declined to be in the film, and at the end, two months before Sundance Film Festival, I get a call from Savannah, and she says, ‘I’d like to be in the film now.’ I say, ‘Well it’s a little late. I’ve already made the film.’ So I discussed it with my producers and said it would be nice to have one little moment. We’re not going to re-edit the whole film, but it would be nice to have one little moment at the end. I flew to Virginia where she’s doing an MFA, and we did an interview, and I got exactly what I desired. I got a great quote from Savannah about believability.

What was the biggest struggle in piecing together such a complex story?

The film has so many characters: she’s Laura, she’s Terminator, she’s JT, she’s Speedy, she’s Emily Frasier. She invents Astor who is also Jeff, then Savannah becomes JT. *laughs* It’s quite a cast! It’s very complicated working through the threads of the stories. It took a lot of time for the film to work, and it took a lot of tinkering with the structure to get it right. I think I re-edited that first act like five times.

There seems to be a mosaic of responses around the books now, and for me the most interesting questions the documentary raised were that of art and authenticity, fact vs. fiction. This is a huge question to end on, but what are your thoughts on all this?

I couldn’t have made the Daniel Johnston film if I didn’t love both Daniel’s music and art. And yes, he’s crazy and mentally ill–that’s how it goes. I couldn’t have made this film if I didn’t love Southern gothic literature and Laura Albert’s books. I couldn’t do it! It’s not me. The story was so fantastic, but if I’m going to tell the story I must also like the art. All art is subjective. People fucking hated Daniel Johnston when I was making that film. “He can’t sing, he can’t play, he’s not Brian Wilson he’s not Bob Dylan how dare you!” I was ridiculed! You think now that because everyone loves Daniel Johnston that the world always did? They did not–he was a footnote. Before that you wouldn’t read about him in Rolling Stone. Mass pop culture didn’t pay attention to Daniel Johnston. But JT LeRoy is a different story. Fashion, music, and cinema all seemed to respond to these books, to want to reach out to this artist. It was a zeitgeist moment in publishing where audiences were showing up in droves at bookstores for transgressive fiction. Try finding that today!

Keep up to date with the film on Facebook.