Complicated Love: On Joanna Klink’s Excerpts from a Secret Prophecy 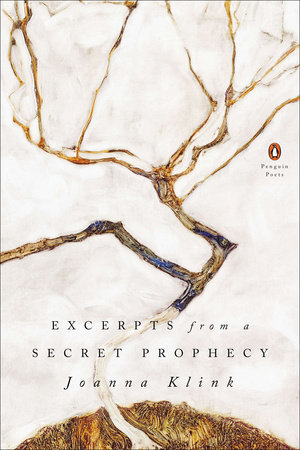 Excerpts from a Secret Prophecy
by Joanna Klink
Penguin
80 pp. / $20

What is love poetry? Who does love poetry actually love? And where does that love come from? And maybe not just what part of the body, but what part of a human is the wellspring of love? Consider these questions from the perspective of the “classical” or at least “conventional” love poem, like Philip Sidney’s sonnet cycle, Astrophel and Stella. Yes, these poems may be asking questions about love in light of what feels like a caricature of love. Which is, yes, a conventionally gendered vision of love (or “love,” as Astrophel’s case may be). However, the poems are assuredly recording Astrophel’s feelings for Stella, and according to each of his sonnets, that feeling is love. Absolute love. Unimpeachable love. But why? What about Astrophel makes him capable of love? Even if he’s a clown or an exaggeration, there is still that kernel of truth that makes his fictional “loving” existence possible. What part of him gives him such certainty that Stella must be the impetus for this love? Put another way, what is love poetry when considered as a lyric centered on speaker with beloved only incidental (or maybe corollary) to the occasion? Can love poetry be expressive of a speaker trying to understand the singular overwhelmingness of their love the way an elegy would be a speaker coming to terms with the overwhelmingness of their grief?

For my reading, Joanna Klink’s newest book, Excerpts from a Secret Prophecy, is a book of love poetry. But the love is her personal love, in particular how a human’s love could be aligned with the nature around her. The poems feel as though Klink has taken a diagram of love and laid it over an impressionistic diagram of the natural world, so that whatever the “objective correlative” connecting “love” to “nature” has actually been subsumed and subjectivized within this speaker experiencing love. Klink’s lyric has been effectively ingrained into the landscape, but it also pulls at the landscape so that it might reveal what is beneath it, beholden to it, implicit. How many ways do the sciences and humanities have of thinking matter into granulated substance, of crafting substance noticed into specific units like molecules, meters, philosophical underpinnings and poetics? Is Klink’s lyric an end, a means for further understanding of what love within nature would be, or is it the very seeds of potentially new understanding? What are the physical properties of a seed? Is the lyric most seed when it bursts into the soil, entrenching it there, pulling the soil into its own life, or is the seed the dry, folded up substance we hold in our hand. What is love? Consider the final section of her poem “Novenary”:

Where my life, hollowed out by solitude,

kept me from sleep, I scoured the red-roots,

the sanded eyes of the crows.

Under a dry moon I kept company

with augury, felt alert to threat.

These are seasons, not eternities,

but to live here, thin water and candor,

is to be stranded. Autumn, morning, dusk,

I scoured the river, opal-alluvial.

If I am only hull to what happens,

let me at least feel more deeply that flitting,

the dead light of stars over my hands,

into my throat. Oar of my body.

Such things as were sensed but not known.

In many ways, “Novenary” poses the speaker against nature. Or rather, the state of the speaker is nature. Where she is “hollowed out by solitude,” she “scoured the red roots.” Perhaps solitude will eventually come to an end, as the seasons do (the sixth line in the quote), but living with “thin water and candor” may as well be a long lived life with interminability. Klink’s conflation is not in a customary metaphorical frame, and not in a messy synesthesia. It is instead in the grammar that bends self into nature and nature into self. Whether it’s a dependent clause qualifying the time or place of the sentence (as the opening of this quote) or in the apposite, where “here” described as “thin water and candor” must refer back to “seasons,” which must refer back to this life of solitude.

I would contrast Klink’s treatment of nature to others’ poems, where a meditative stance is taken between love and nature, or, if not love, at least subjective intent, and the resemblance this intent would have to the nature around it. I’m thinking especially of Jane Mead’s The Usable Field. I’ve also been reading Zach Savich’s newest book, The Orchard Green and Every Color. In books like these, the poems feel so aware of nature as a quiet–a filled presence that the poem would be good to treat with a combination of tenderness and deliberation. Mead and Savich are writing poems that mimic that particular kind of lived nature, where a person can feel stillness and also be aware of how much activity is inherent to the natural world around them. This is where Klink’s book differs. The love she is writing about is at that paradoxical juncture in a relationship where both sides can see why it should end, but there could still be some sense to keeping it, and so the love felt in Klink’s poetry maintains its turbulence, even as it also feels resolved. Think here of Robert Lowell’s The Dolphin, where the circumstances for still loving are unsettling. However, Klink’s book has little moral quandary about it, except for how nature might show how difficult this kind of particular ending to a relationship might objectively feel.

A similar kind of blurred boundary can be found in her use of the second person. Klink has situated herself within a landscape that is together lonely and expansive, filled with a “you,” and the speaker’s contemplation of uniting with this “you,” or at least discovering what life will mean once she has fully reconciled having been with “you.” The poems are consistently blotting “you” over their surface. And while, at first, it appears necessary to take “you” to be a person Klink literally yearns to reconcile with, like the “you” that appeared in her previous book Raptus, there is also the possibility that the “you” could be a reference to the speaker herself as she unavowedly comes to terms with her post-relationship position. “Learning to love herself” as the colloquialism would say. Consider this quote from “Terrebonne Bay,”:

And what the skies mean, passing over beds of tarred

around a candle. Where had we hoped to live?

You came into the month with dreams.

You walked on those beaches even though

you knew they were sick.

Then contrast that with this quote from “3 Bewildered Landscapes”:

The beams of light

overhead in a forest pure and aloof. What would they have me do.

Can you alter the scope of your own loneliness. Can you touch

one thing that will not vanish. Nightly the shift of an island,

the inaudible barge floating past. If you hear me, come quietly.

Granted, an obvious contrast is the “we” appearing in the “Terrebonne Bay” quotation, indicating a plural of people, and then the mention of loneliness in “3 Bewildered Landscapes,” which would seem to suggest a “you” addressing herself. But note how “you” proves an important juncture in both poems. The address to someone is a powerful poetic note in the book. In fact, “you” is, perhaps, the first reason someone might consider Klink’s book an example of love poetry. That the “you” grammatically bleeds over from the beloved and occupies the speaker addressing herself, that the shift from “you” of beloved to “you” of self is never staged, but is simply implied by circumstance, creates this effect I’m still trying to describe for myself. Love poetry often exists like a beam of intense light directed at the beloved. And so instead, Klink bends the light? That doesn’t seem right. It’s not a matter of dispersing that intense beam, as the object of loving is always present in the poem. But I wouldn’t say it’s a “bending” either, as that would imply a kind of harsh self-reference that doesn’t accurately describe those poetic moments.

That “you” represents a constructive ambiguity in the book. Because love is usually ambiguous, especially when love has been between two people, and now it must be something else. At least, this is what they appear to have decided. Does the book say who decided? Who ever really decides on these types of situations? What does professed love between two people become when it can no longer be professed to the other? Excerpts of a Secret Prophecy might not answer that large a question. But this is someone speaking how her loving would be described in lyric form. She is one person trying to understand for herself how to navigate through this type of love, which is plenty complicated enough.