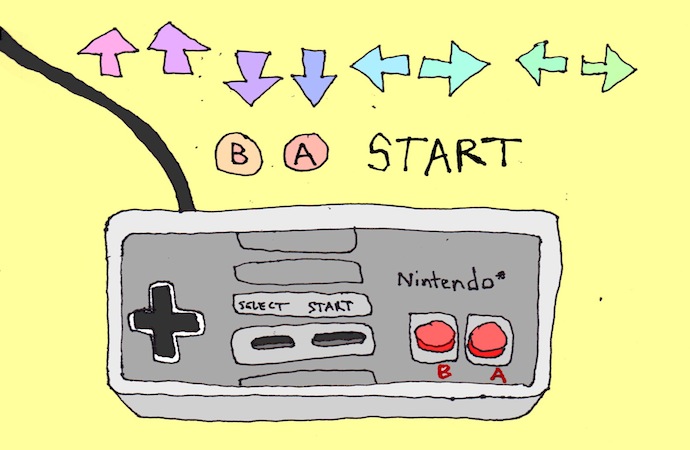 Fun is often described as the most important element in video games, which in most cases translates into rule-following against a backdrop of movie lot freedom. Designers put players in an environment where uncertainty has been narrowed to a simple number of problems, careful sequencing of which keeps players from having to wonder where the problems came from or why they need solving. Fun is the relief that comes when open-ended problems are turned into multiple choice questions, or, better still, matters of reflex. It’s the end result of a player bartering away their obedience in exchange for an elaborate charade of advancement through levels and story stages, which makes cheating the most ethical approach to playing games, declining the call to follow rules and instead think of fun as a process of revealing the cheapness of the rewards that come from obedience.

In Homo Ludens, Johan Huizinga captured the spirit of cheating as anti-play: “as soon as the rules are transgressed the whole play world collapses.” Cheating threatens to destroy the precious commodity one has just spent a full day’s wage on, the locked progression of experiences contained on the disc. In the early days of console gameplay, cheats like Super Mario Bros.’ hundred extra lives trick were still admired because they were comparatively obscure and required some skill to execute.

Cheating has been a highly generative part of game culture throughout the years, not just in laying out the framework for microtransactions and free-to-play economies, but in widening the scope of gameplay itself. Quake’s rocket jumping, an unplanned exploit of the game’s damage modeling and physics, allowed players to reach new parts of maps, changing the game’s tactical balance. The germ of Grand Theft Auto was the result of players’ exploiting a glitch in Race ‘N’ Chase, a top-down racing game DMA Design was working on. During development, playtesters noticed a bug where the police pathfinding AI lost its orientation and would try and drive directly through the player’s car, creating the chaotic ramming and high speed collisions that proved to be more entertaining than the game’s original concept of racing.

Other cheats have acquired the undignified status of gamebreakers, destabilizing mistakes developers try and patch out to preserve the game’s integrity. Demon’s Souls Stockpile Thomas glitch, for instance, allowed players to replicate an infinite number of items and upgrade materials by going through an elaborate order of actions. Making use of the glitch removes the blanketing despair of being stuck with a +7 weapon and realizing the hours upon hours of farming it will take to get enough chunks and pure stones before you’ll be able to reach maximum level. The obsessive anguish of wanting something collapses into the indifference of having gotten the prize without having suffered through the process of its creation.

Dark Souls contained its own unauthorized warp pipe with a glitch that allows players to skip directly to the end boss area halfway through the game. The cheat lets players jump right into the Kiln of the Last Flame, making 30 minute speedruns possible. It also allows first-time players to skip some of the game’s most imbalanced and exploitative areas including Tomb of Giants and Lost Izalith (and its massive lava-bed filled with Tyrannosaurus Rex creatures).

Making use of this exploit destroys the Dark Souls’ core values, built around the tolerance of suffering. If you haven’t suffered the unfairness of fighting giant skeletons on narrow cliff ledges in the pitch dark, and later having to choose between holding a lantern or a shield, you haven’t suffered enough, you haven’t understood the game, you haven’t gone deep enough into your submission to the logic of its rules. It’s not about winning but the nearness of the game’s hostility to your actions, always a second or two away from outright rejection.

Other games have made the impulse to cheat a central to their moneymaking strategies. Where gold farmers and bots were once the shady class of rulebreakers spoiling a game’s economy, Facebook and mobile games have made cheating the entire point of play. Games like Field Runners 2 will sell you coin doublers and Facebook is always happy to sell you more in-game currency to buy powers and items when you haven’t earned enough from regular gameplay. Dead Space 3 is the most recent console game to embrace cheating so long as it can be monetized by the publisher, selling ammo, upgrade materials, and the possibility of halving the collection time for Isaac’s scavenger droid.

These developments in game design reveal the paradox of our attitudes toward cheating. A behavior that is finally defined not by fairness or unfairness but by who has control over outcomes. When unfair behavior is supported through the authority of the game designer it is an acceptable artistic implement, but when the player engages in imbalanced behavior for their own benefit it’s cheating. This tension is crucial to understanding video games as both experiences and expressions. Once a player begins to see the scope and general values of a game’s systems, it’s possible to  interpret them in an artful or emotional way––say realizing just how thorough and demanding Demon’s Souls upgrade stone scarcity is and reading into it an emotional metaphor for the onerous requirements of getting anything even marginally valuable in life.

Yet, interpreting a game’s systems does not lead to hours and hours and hours of subsequent value from carrying out the metaphor to its mechanistic conclusion. The more valuable part of a game is not winning but in the player’s struggle to understand why they want to win in this particular setting and with these particular rule values. Cheating allows players to reject the coerced emotions of the designers––like an audience talking back in a theater. But unlike films, games require players to internalize a worldview and change their behavioral impulses according to it. Because designers seek to directly affect a player’s impulses the need to talk back––to subvert and antagonize a developer’s rules and values––is an ethical imperative, what distinguishes a game from propagandistic anesthesia.

The most worrisome form of cheating comes when the hostility toward a designer’s rules are turned against other players, a way of harassing those adhering to rules someone else has rejected. Huizinga distinguished between a mere cheater, who “pretends to be playing the game and, on the face of it, still acknowledges the magic circle,” and the spoil-sport, who actively seeks to interfere with other people’s experiences and “robs the play of its illusion.” Here the impulse to rebel against the impositions of the developer require harassment of other people, something that is crucially disruptive to the entire concept of making and selling games and so cheating becomes criminalized within the game world.

Developers and platform holders operate an elaborate system of computer surveillance and complaint reporting in order to locate and punish spoil-sports. PC players are given tools like Punk Buster and Valve Anti-Cheat, which scan game files on a player’s computer looking for hacks. Sony and Microsoft have similar mechanisms to detect hacked console hardware and provide tools for players to report problem players in online games. The penalties for being found and labeled by these mechanisms is removal and, in many cases, lifetime bans from a particular game.

Games match-make for skill and experience, but they do nothing to match people based on interest in play style. There are rarely modes or areas designed for experimental purposes, to give players who have no interest in competition or rules a place to create for themselves. Even in games like Halo 4 and Far Cry 3, which offer powerful level creation tools, there is a narrowness that comes from the modes’ separation from the traditional parts of the game. The story progression cannot be recomposed with player-driven modification, nor can the concept of shooting other players as a form of competition be addressed, criticized, satirized, or expanded upon from within the multiplayer modes that support them.

This structural conflict is not ultimately between cheaters and good players, but one that calls fun itself into question. We have never had a good or consistent definition of fun, and yet it is used as the tautological justification for all game design. Games that are organized and administered in the name of fun antagonize players who don’t share their basic values, defining anything antagonistic to rule-following as cheating, harassing, or playing the spoil-sport. We have made the desire to behave without rule a malady, and creative and efficient obedience the most respected form of behavior in game culture.

In The Culture Industry, Adorno described the various amusements of free time as “nothing more than a shadowy continuation of labor.” In pursuing the competitive leisure of sport “people first inflict upon themselves (and celebrate as a triumph of their own freedom) precisely what society inflicts upon them and what they must learn to enjoy.” Our pastimes are dramatic miniatures of our work-a-day selves, lavishing the mundane forms of labor we cannot escape in excess emotional rewards. The parallel with video game culture is powerful, with its scarcity models and derivation of fun from the domination of others. The role of game designer becomes an amalgamation of teacher, boss, and cop: building tutorials, setting productivity goals, and punishing those who try and break the rules with removal from the community.

What’s fun about video games is not the winning and the losing, but the relief that comes with obedience. Cheaters can be considered anyone interested in having an experience not predetermined by a rule or limit, someone intent on antagonizing those whose adherence to artificial rules numb their awareness of possibilities outside those other prescribed by the game’s systems. In this light, cheating is the only ethical action one can take in a game, forcing play to be a consideration of the rules themselves and not an obedient exploration of how to best follow them. Cheaters are not enemies of game culture and good design, but an essential group whose persistence should be embraced, internalized, and allowed to flourish into new ways of playing that even our most celebrated proctors would never have thought up on their own.