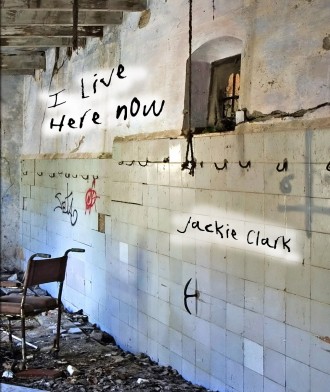 The latest offering from Lame House Press (which “irregularly publishes chapbooks from emerging poets”), Jackie Clark’s I Live Here Now, reads like the description of an object that is just out of view, or the description of a feeling about an event, always at one remove. The only commitment to titling pieces is the recurring ( ) which introduces each poem. Maybe there’s too much invitation to speculate, and maybe the reader begins to think, “now that’s a handsome SWAT team guy” (ahem, awkward), or maybe there is just enough and each of the 15 poems may expand in the brain pan like a Shrinky Dink and take on that encoded form. An incomplete list of obsessions (go on, obsess) found herein: repetition, “counting the moments like counting the moments,” lists, “prolongs the anti-effacing, / prolongs the darkness,” reversal of the word onto the word, “even without the pay off, / which is the pay off,” “all this while someone may or may not be looking over my shoulder,” and a romance with the end-stop comma, which may or may not be self-evident. Available for $5 (+$1 shipping) from Lame House Press in a limited edition of 100. Jackie Clark can be found at nohelpforthat.com. Did I mention I’m a fan? –– AH