Part 12, in which we are becoming-music. Previous installments can be found here. Read in any order.

We know the side is over when we reach the silence in the runoff groove. It isn’t silent, though: we hear the empty groove. With repeat listens, we know when the side is coming to an end; the side isn’t over until we flip the record.

So we revise our listening with each passage, just as we revise our phrasing each time we go over our own song. To write to music, to write through music,[1] is to sing along, and to change (with) the music. We can flip that record all night; at some point we’ll have to change the album.

12 is noon and midnight, the night before and the next day, the Moon (Major Arcana XVIII in the Tarot) and Dagaz (Elder Futhark Rune 24). The Moon in XVIII is the deepest part of night, after the healing Star at XVII, and before The Sun returns at XIX.[2] The Star prepares us for the dark night, but we are always astonished to find ourselves alone with the Moon. This sentence is written on the second day after the New Moon in Taurus,[3] when we have to believe our satellite is there in its absence, when we search the sky for the faintest curve of reflected light. We are calling back our power—that is, the Moon is calling us to our power. Already we are halfway to its fullness again.

Dagaz is breakthrough and transition, new day with the Runic number that completes our diurnal cycle. When we add noon and midnight we get 24. It is the Sun shining off the Moon reflecting on the water the Moon draws to high tide. Whenever we reach 12 (as in the Hanged One in the Tarot), we stand before the portal to Dagaz: that empty mirror, that gate. 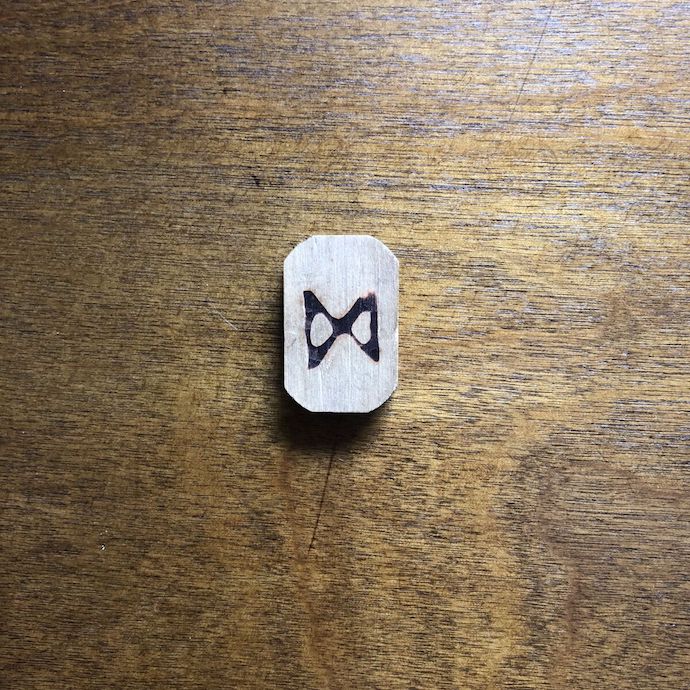 The plan was to write this hour of Shana Cleveland’s Night of the Worm Moon, and play it off of the Ex Hex album It’s Real. We’ll leave that for another transit, which may open a portal to the Worm Moon of this past March, at the gate to Spring. After watching Chasing Trane: The John Coltrane Documentary last night, after two projects aligned, Book Album Book and Janky Materiality[4], wherein they became coextensive, it seems like time to open that portal, to show the eclipse.[5]

What follows is based on a chapter originally written for Janky Materiality, before it merged with Book Album Book, as each was becoming the other.

One more note of introduction: the documentary that partially motivates this piece focuses by design on John Coltrane and his music, and by necessary extension includes a bit of Alice Coltrane’s story, which is both distinct from and integral to John Coltrane’s life and art. For this listener, Alice Coltrane’s arrival always signals the next step in the evolution not only of John Coltrane’s music, but of jazz, and of human consciousness. To these ears, it does not get vaster or more profound than the music of Alice Coltrane. Her art is fundamental to our transition from whoever we were to whoever we might become, if we listen to each other and vibrate[6] together. 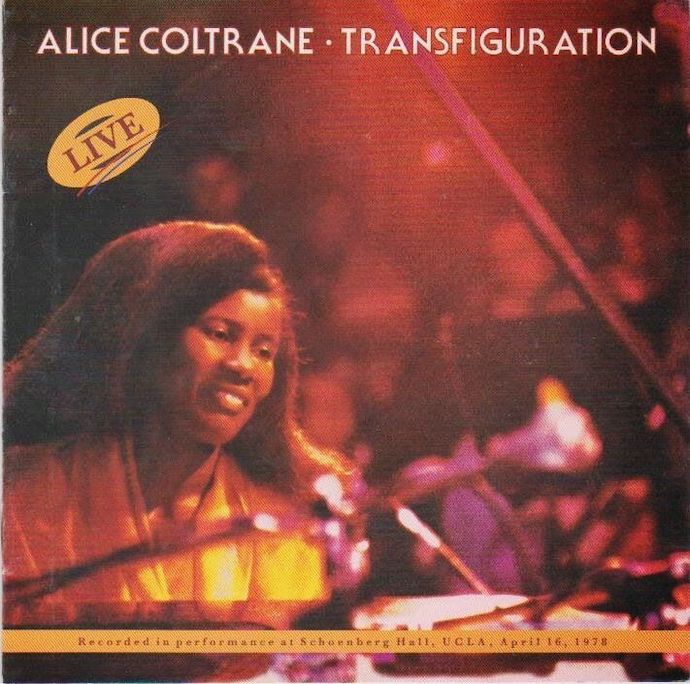 As evident on the 1978 live album Transfiguration and the 2017 compilation of her late period ashram music, The Ecstatic Music of Alice Coltrane Turiyasangitananda, Coltrane is a harpist and pianist who begins to explore the possibilities of synth controllers (via monophonic synth organ, likely a Wurlitzer)[7] to play different sounds. In particular, she takes advantage of the action and resonance of the digital key interface, so she gets distinct note intervals, and can dilate and modulate sustains. This is especially clear on the opening track of Transfiguration. She’s doing things you can’t do on a piano, and it’s equal parts demo and recital. She’s playing with the interface. The analog/digital interface distinctions are clarified in the second track, played on piano, and the relative affordances and constraints of the digital and analog instruments, along with the particular timbre and resonance of each interface, inform one another. Nor is there a false binary between the two. Coltrane coaxes a warmth and fluidity from the organ, and brings a pointillist sharpness and precision to the resonance of the piano.

Compare Coltrane’s juxtaposed and intersecting modes of playing analog and digital instruments with the becoming-digital compositions of Colin Stetson (e.g., Hereditary soundtrack) and Jóhann Jóhannsson (soundtracks for Arrival and Mandy).[8] Coltrane too evokes sometimes volatile and always electric meeting points between cosmic awe and interpersonal connection, as she portals and bridges worlds.

For Coltrane, this includes the afterworld, and one function of her music is to interface with and extend the spirit of her departed husband and collaborator, John Coltrane. Her mediums include instruments like harp, piano, and organ, as well as key collaborators like Pharoah Sanders, who also played with John Coltrane,[9] and at moments in Alice Coltrane’s band Sanders seems to blow open an interdimensional passageway to the beyond.

These cosmic ambitions are made most explicit on Alice Coltrane’s first album, A Monastic Trio, released in 1968, the year after her husband’s death. The 2014 vinyl reissue on Superior Viaduct includes the following note, under the title: “This music is dedicated to the mystic, Ohnedaruth, known as John Coltrane during the period from September 23, 1926 to July 17, 1967.” The gatefold liner notes include commentary from Amiri Baraka (credited as “Ameer Baraka (LeRoi Jones)”) that begins, “Alice is one earth bound projection of John’s spirit.” There is also a 1968 interview transcript in which Alice Coltrane says, about John Coltrane’s music as she understands and continues its spirit:

The use of the term [jazz] I feel, is inadequate in its description of the music created through John. A higher principle is involved here. Some of his latest works aren’t musical compositions. A lot of it has to do with mathematics, some on rhythmic structure and the power of repetition, some on elementals. He always felt that sound was the first manifestation in creation before music. I would like to play music according to the ideals set forth by John and continue to let a cosmic principle, or the aspect of spirituality be the underlying reality behind the music. … It was a higher concept John had. It was higher than this world’s.

The spirit of playing between earthly and otherworldly realms, and of rigorous experimentation with any and all means available, drawing on multiple disciplines and traditions, is evident on this album and throughout Alice Coltrane’s work,[10] as she extends her own spiritual practice (and reach) through music. This is a matter as well of visualization and projection, where Coltrane makes other worlds possible (simultaneously) within and beyond this one.

Card XII in the Major Arcana, the Hanged One, is a passage of surrender.[12] It is practice for transformation and Death in XIII. We must let go while not letting go, in order to attain the inversion pictured in most versions of the card. What we receive in exchange for our acquiescence[13] to change is a new perspective, and perhaps a glimpse of what is impossible in the current world, but available to us in the next world: freedom.

[1] We borrow a phrase from the poet Julia Bloch’s original proposal for a class I taught at Penn, “Writing Through Music.” Those notes she planted regrew the mushrooms in my ears.

[2] Thank you here and elsewhere to Lindsay Mack, Michelle Tea, Amanda Yates Garcia, Sarah Faith Gottesdiener, and all the writers of books that helped me better respect the Tarot.

[3] And this note is added on the New Moon in Gemini. We carry texts with us and return to them as well—another music. And here again is how we gather several selves, from synchronic I to diachronic we.

[4] Janky Materiality, a manuscript in progress and the follow up to Trouble Songs: A Musicological Poetics (punctum 2018), is a performative critical investigation of analog-digital interface and materiality, language-oriented poetry and digital language art, experimental electronic music and modular synths.

[5] We assert that eclipse is not the obscuring of radiance as one body passes before another, but the joining of celestial bodies. Eclipse is portal and matrix: double of the New Moon.†

[6] as we must vibrate to sing

[7] There is some speculation and debate about this in online gearhead forums like Music Player Network and the unfortunately named Gearslutz, but in any case she is playing a synth organ.

[8] Chapters in Janky Materiality explore hybrid acoustic instrumental, analog and digital synth-driven scores in pursuit of aural soundscapes, sound objects, and the aliens and monsters they generate and foresee. Call it aural being.

[9] Most notably, Sanders played on Coltrane’s 1965 album Ascension, gateway to the music Sanders would subsequently make with and without Alice Coltrane.

[10] And we want to explicitly recognize Alice Coltrane’s agency and accomplishment, even as there is a somewhat dated sense in the quoted material above that she is an accessory to or vessel for John Coltrane’s spirit. We assert that she takes her music places that John Coltrane was not capable of reaching in his lifetime, even as she does so in part as tribute to his legacy.

[11] When, in Jordy Rosenberg’s Confessions of the Fox, Jack Sheppard says I’m music, a footnote translates the underworld cant in which the novel’s rogue characters communicate on the sly. Here a word we’re familiar with, music, takes on a new form: a friend. Or, that is, a new form, music, is taken on by a friend.

[12] A card whose profound message we receive perhaps only when we move beyond the gender binary of its traditional representation, and certainly only when we transcend its verbal and visual associations with lynching, crucifixion, and capital punishment, by coming to terms with our own histories into the present.

[13] in the old sense of untroubled contentment, quiet satisfaction the OED records