Blurred Lines: As We Know by Amaranth Borsuk and Andy Fitch

Part conceptual project, part New York School poem, As We Know raises questions of authorship while delivering beautiful descriptions and quiet reflections in a diaristic form. It’s a collaborative project where one writer—Amaranth Borsuk—edits another writer—Andy Fitch—but instead of fulfilling the “editor” role, the writer-editor becomes a co-author. Their identities are blurred, and the book becomes a “transgression of boundaries.” While this raises questions about whose experience is being told, ultimately, the answer is neither’s, and perhaps more importantly, it doesn’t matter. As the author notes in the journal, Rosalind Krauss wrote, “The one who writes doesn’t know more than the other.”

Designed as a day book, As We Know has daily entries spanning from April 30th to July 1st, set in New York, “Home” (Wisconsin), and Berlin, with entries concluding at either 10:00 am or at 10:00 pm. The original text from Fitch was generated in 2007, with Borsuk’s edits taking place in 2013. The cover of the book is inspired by Robert Creeley’s A Day Book: 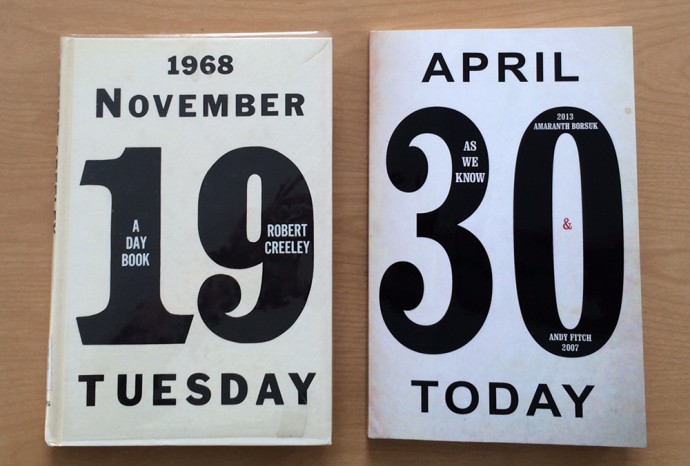 while the interior uses a daily calendar format: 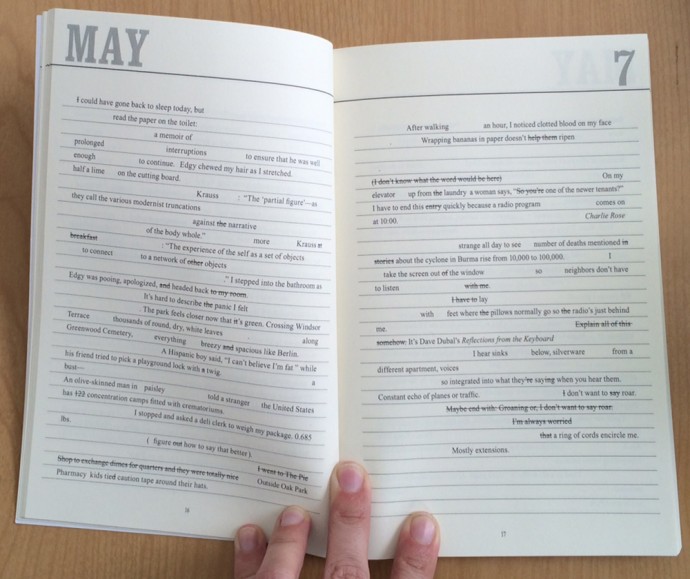 The text incorporates erasure and strike through, and includes notes such as “figure out a different word to use,” “these should be past tense,” “find a different word for shirt,” and so forth that make the reader wonder whether or not this was a note written by the editor or an immediate self-conscious comment made by the original writer at the point of record. The manipulation of the text is reminiscent of Nathan Hauke’s practice of “composting,” which is well demonstrated in his 2013 Publication Studio book In the Marble of Your Animal Eyes. Hauke finds his own writing as a place to return to, mix up, scribble out, and write over, and keeps his edits on paper for all to see, while here, it’s Borsuk who uses Fitch’s text as a sort of playground to erase from, cross out, and re-create in her own vision.

The result of this composting is an engaging series of entries that fits inside the New York School tradition of: “I do this, I do that.” For example, on May 1, the author begins the day by stretching, observes pigeons out of the window, reads, goes to work, and rides the subway, all while making note of various details: 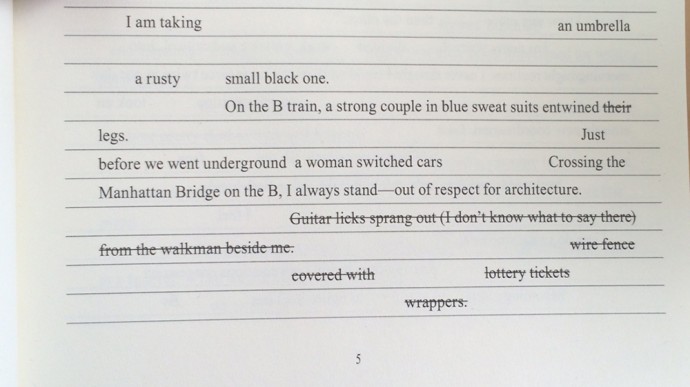 The entries are largely made up of what makes up a life—details of friends and roommates, grocery shopping, the cat pawing at the writer’s shoelaces, and lists of books the writer is reading. Among those books, it’s fitting that the author lists The Collected Poems of James Schuyler, for Schuyler is a master of capturing the details of everyday. When the author remarks that s/he wishes s/he knew the names of flowers, it seemed like a reflection on reading Schuyler. Of course, Schuyler is also a master of the line, which is not as central to Borsuk and Fitch’s fragmented text.

Though clearly there was labor involved, there is an effortless quality to the text. The details compiled are ultimately a list of fragments, and the erasure and strike-throughs only further contribute to the fragmentation. Interestingly, the editing here doesn’t feel like an intrusion despite its visibility; instead, it seems to help emphasize the way thoughts trail off or jump to a different idea without transition or linear flow—perhaps acknowledging Creeley’s take in A Day Book, “as if thinking were […] a line to be followed.”

Despite the question of authority and fragmentation, As We Know maintains a consistent voice throughout—one that doesn’t quite belong to either author and yet comes across as authentic and captivating. Because of this, it is easy to forget about the conceptual part of the project and be pulled into the dailyness of “one’s” experience, regardless of the fact there is no one person behind it. There’s something strangely comforting about the consistency that emerges, both with the voice and with the rituals of the book—not just the ritual of the daily writing exercise set to the clock, but also the way the author begins the day by stretching, takes daily walks, and meditates. Despite the author’s travel from New York to Wisconsin, and back to New York and then onto Berlin, there remains a calming steadiness throughout the collection.

As We Know can be enjoyed for both its conceptual aspect and its content. While subverting the traditional relationship between writer and editor, it recalls other exercises in record, such as Schuyler’s “The Morning of the Poem,” A.R. Ammons’s Tape For the Turn of the Year, and Bernadette Mayer’s Midwinter Day. In each work, the accumulation of details creates a sense of the life of its author. In As We Know, the accumulation of details creates a portrait of someone who is deeply engaged in the world of books and allows a tiny window to the life of a thinker, even if that thinker is nameless and genderless.

As We Know is now available from Subito Press.