Blindness, Bats, and Belief As The Only Superpower We Need: On Daredevil and Beyond 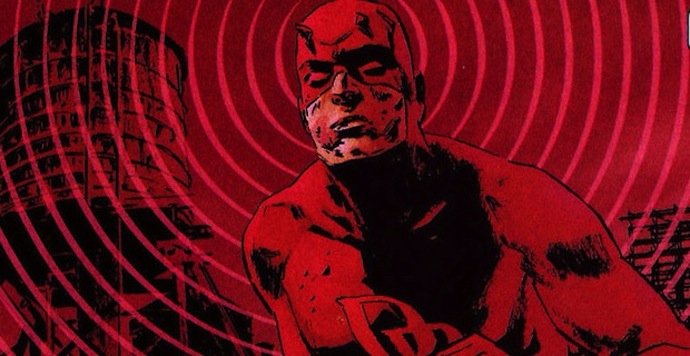 The dark can be a terrifying place to be. In love, in grief, in sight: there is a disorienting fear of blindness. The term itself is used with a negative connotation almost universally, and blindness has been enacted as a punishment in societies from ancient Greece to modern Pakistan. We depend heavily on visual cues even if we truly see only what’s on the surface. Though there are five senses, sight seems to hold a special value in society.

Every morning that I wake up, the world is a blur, objects resembling those in Renoir’s Impressionistic paintings, soft edges and strokes. I’m fairly nearsighted, and have worn contact lenses since I was ten years old. Now I am thirty-two, and have begun to develop floating black shapes in my line of vision. These floaters are caused by bits of collagen detaching from the retina as you age. They’re small and I’ve learned to ignore them for the most part, but they’re also a constant reminder that vision is not stagnant or certain. As I get older, vision becomes more precarious, more difficult to bank on. I begin to doubt the pictures I see, sometimes covering one eye and then the other to notice the subtle differences in color, in shades, in clarity of detail. I begin to realize in terror that my sense of smell is underdeveloped, that my hearing is dulled. My alternate tools of survival do not seem favorable in Darwin’s model of the fittest.

When I was twelve, I accidentally fell asleep with my contact lenses and almost went blind. Luckily I got to the eye doctor just in time, and as a child this did not have such an impact, even though I was in a lot of pain and it took months to heal. I never truly thought about it in the bigger picture, but at age thirty-two my slowly devolving vision reminds me of mortality. I am terrified of the darkness I fear, of not being able to trust my eyesight as I get older. I take pictures fervently, obsessed with producing images, of curating a visual narrative.

Yet what if blindness is not something to be feared at all? What if it is, in fact, a social construction? If we posit blindness as a negative, a void, a lacking, that is what the blind will come to be. And yet what if having high expectations of the blind could completely turn this perception, and thus reality, around? We often hear that cultivating a high expectation of students in the classroom leads to better results. So what if we apply this principle to the condition of blindness?

This is exactly what Daniel Kish believes. Featured on NPR’s podcast “Invisibilia” with co-hosts Alix Spiegel and Lulu Miller, Kish relates his story of blindness and how he learned to excel despite this physical handicap. He became blind at the age of thirteen due to retinal blastoma. Yet from a young age, his mother developed a hands-off approach and allowed him to navigate the world around him even though he could no longer see. He continued to attend a regular school and began to learn to echolocate, in which he clicked his tongue to understand where he was in space, much like bats. Learning this skill allowed him to walk to school on his own, make his own lunches, climb, and eventually learn to ride a bike.

His classmate Adam Shabel, however, attended the School for the Blind for several years before coming to Daniel’s school. At the School for the Blind, Shabel wasn’t expected to do anything for himself, so he never learned how. People made him food, helped him walk, and never allowed him to engage in any activity that was remotely dangerous. When Daniel met him, he couldn’t understand why Shabel was so helpless. But now that he’s an adult, Kish knows that it was precisely because Shabel was given such low expectations of what he was able to do, and so he lived up to these lower expectations. As Kish states, “Life will have nothing in store for you if everyone helps you.”

Today, Kish helps teach blind children how to do many things on their own by echolocation. He makes them climb trees, and cross streets by themselves. Some may view this as dangerous and irresponsible, but Kish firmly believes it’s necessary for these children to develop self-sufficiency. As he says, “Running into a pole is a drag, but never being allowed to run into a pole is a disaster.” Kish is attempting to undo the repercussions of societal low expectations, one child at a time.

In fact the concept of echolocation is not a new one, and has been studied by scientists since the 1950s. When left to their own devices, it has been shown that many blind children will intuitively click their tongues as a way to navigate their surroundings, yet this process is often stopped short by societal norms. But the question remains–is blindness real and objective or is it a societal construction? Are the blind really unable to see, or is there more to the story?

As the episode of “Invisibilia” continues, researchers are interviewed who have studied the brains of the blind. It turns out that some blind people can actually see images with a certain spatial quality and depth. When “shown” certain objects, the visual cortex in these blind people still lights up. The person is still constructing an image in the mind and so actually does have a sort of sight. Some people compare this vision to our peripheral vision, where they can see something but not a complete image. However, not all blind people demonstrate this activity in their brains. It is much more common in those who have learned to echolocate, further proving the importance of allowing blind children to develop this skill, and setting the expectation for their abilities high from a young age.

Most comic book heroes capture our interest because of their superhuman powers. There’s Spiderman, who has the agility and strength of a spider, and Superman, whose Kryptonian body gives him immunity from most harm. The recent release of Daredevil on Netflix has enthralled viewers with its fight scenes, plot twists, comedic jabs, and suspenseful action. This isn’t an original series, but rather an adaptation of the Marvel comic Daredevil, which was first released in 1964, and later made into a 2003 movie starring Ben Affleck. And what exactly is this comic book hero’s superpower? Daredevil, known also as his alter ego Matthew Murdock, is blind.

As a child Murdock is blinded by a radioactive substance that falls from an oncoming truck. Though he loses his vision, his other senses are enhanced to great levels, and he is left with a type of sonar, which acts as his vision. He uses these heightened senses to guide him through the world, avenging his father’s death and fighting evil. So his superpower is the fact that he can navigate the world like someone who can see, but even better.

Murdock doesn’t immediately relish in his newfound ability. In fact the extra loud noises that surround him frighten him. One day, however, an older blind man known as Stick comes into his life, teaching him how to harness the powers of his sonar, and how to kick some ass while doing it. Stick is not sweet, and he doesn’t hold Murdock’s hand. Rather, he is firm, and has high expectations. Daredevil internalizes these high expectations, and learns to use his heightened senses constructively.

Stick, in a way, is reminiscent of Daniel Kish. He liberates Murdock by believing against constraining him. As Kish relates during the NPR podcast, “When you lighten someone’s load you don’t allow them to expand.” Stick is a purveyor of tough love, and slowly yet surely Murdock learns how to “see” in a way that extends beyond the visual realm. He can hear noises far away, and through the blurring cacophony he is able to extract sounds of trouble to help him fight evil. He hears the heartbeat of the people around him, and can use this to judge whether they are truthful or dishonest, good or bad. By day, Murdock becomes a successful lawyer, using his different perspective to craft well-executed arguments. And by night he uses his senses to expertly fight armed foes with only his bare hands, detecting even the faintest motions and staying one step ahead of his enemies who rely so heavily on their sight. He even uses his abilities to somehow pick out the most attractive woman in a room, much to his friend and law partner Froggy’s chagrin.

This brings me to another consideration: is Daredevil actually a superhero or just a kid who grew up with high expectations? Is he the penultimate example of blindness as merely a social construction? In some ways, I think he is. And this is what draws me to Daredevil in a way that other superheroes do not: he could, perhaps, exist in real life.

Watching Daredevil comforts me because he demonstrates that even amongst darkness, even when the world is a blur, there can be light. I think of my deteriorating eyesight, and the possibilities of losing visual acuity. I think of mortality, and misfortune, and the maturation of a body beyond control. All these things are uneasy, and difficult, and disorienting. And yet when I watch Murdock fight evil by day and by night, sharper than 20/20 vision, I take some solace in the unknown. When I think of Daniel Kish, writing bikes and hiking, using his own type of sonar to guide him, I’m reminded that superheroes can exist in real life, and perhaps that is the ultimate appeal: to spawn and cultivate a belief in our own strength.

Shoshana Seidman is thankful for magical realism, cookies every day, solace and solitude, the statute of limitations, the Muppets, blistering heat, wounded writings, and regeneration. She has a BA in Literature and Writing from UC San Diego, and is a regular contributor to magazines such as The Culture Trip and Entropy.