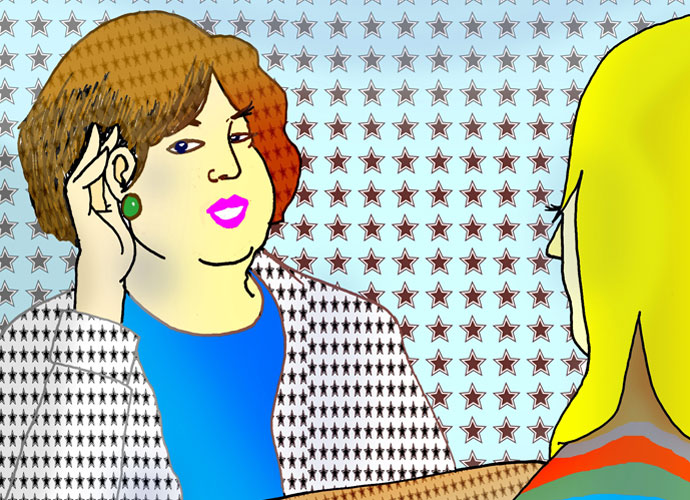 Between Psychics and Stilettos

Their pictures were lined up on the wall accompanied with a bio. Although I knew I wouldn’t be able to choose, I read each of them.

The woman up front––the only one available––thumbed though her schedule and told me she could take me now, but we would have to be quick. This wasn’t the first time I’d done this: I’d done it once in a dark and dingy ranch home, curiosity burning through me and twenty dollars burning through my pocket, and another time on vacation tempted by a woman on the street with bleached frizzy hair and sparse teeth.

This psychic didn’t have a fancy name, she didn’t have dangly earrings or browning teeth, she didn’t talk in an accent––she was just a lady, a round lady dressed in everyday clothes. She could have been my Algebra teacher. Her room looked so much like a therapist’s that in my memory there is a box of tissues that I’m not actually sure was there.

“Write your name down on the page.” I was skeptical, self-conscious as I rounded my O’s, careful not to hand her information about myself only to have her hand it back to me under the guise of “psychic abilities”.

She shook her hands out like she was shaking off water.

“I’m calling forth my spirits,” she said. “I’m calling forth Jayne O’Connor’s spirits. Ok ok.” She put her hand up close to her ear. “There is a man behind you. He’s not a grandfather or a father, but a relative. My ear is buzzing. Something with his ear… an injury?”

Nope. No one I know of. Though, I come from a large Irish Catholic family. I have more relatives than I can keep track of.

“He says… he says you have a big heart, you have a lot of love to give––a nurturer––a caretaker––are you in the heathcare industry. A nurse?”

Almost. Not quite. But I did foster dogs for a year and have had more jobs where I am in the position of caretaker than I haven’t.

“This heart. It’s very large and very giving. He says you are wonderful communicator. He says when your heart speaks people listen.”

Again, a half-truth. I’m good at talking about my feelings when my feelings won’t make a damn of a difference in a situation. But when faced with uncomfortable conversations or conflict I either blow up or shut down.

Many years ago, the guy I was dating and I were riding in my car. Without meaning to, I made a statement about my near-future plans that prompted him to question our future together and ask me (in a very low and serious voice that I wasn’t used to coming out of him), “What do you want from me?”

The mature thing to do in this situation would be to tell him that I had never had feelings like this about anyone before and that these feelings for him scared me shitless. I should have told him that I didn’t know what I wanted from him or from life, but I knew I liked him a lot.

What I did was pretend I didn’t hear him and turned up the radio.

It wasn’t even a good song.

There she got me. My father used to pull me aside and tell me that I needed to put my boxing gloves down and stop fighting the world.

She asked me if I had any questions. I asked her about my love life.

I wonder if psychics hate this question; I wonder if they tune out when they hear it, bored I don’t have anything more interesting to ask her than a 14-year-old Bieber fan does, and tired because most of her clientele come in wondering the same silly question. I wonder if she has an automatic answer in her pocket, one she doesn’t think about but just hands out to every sad little girl who wanders in because she’s too bored to give them a real answer about love and yearns for a more challenging question. All my projected monotony made me question her answer.

“This summer will be very different. You’re going to have a lot fun. You’ll have a lot of amazing experiences you never had before. I see a brown-haired man whose name begins with a D. He’s very prevalent. I also see you taking a break soon. I see a large body of water. Are you going on vacation soon?”

“I see you with him near water… some type of water. You don’t know a David? The D is coming in very strong.”

Everyone knows a David; it’s a common name. But no, I didn’t know a David in that way, not in the way that I wanted him to be a prevalent part of my summer near an unnamed body of water. I didn’t say this to her. I just said no.

Before I left her tiny office in the back of a New Age shop, she reminded me once again to let my guard down. She said, “You need to seem more available if you’re ever going to find love.”

I thanked her for her time and left to get ready for my blind date.

As broad or inaccurate as I felt the psychic’s reading was, her recommendation to let my guard down was the best advice I had gotten so far. The way home I thought about all ways in which I pushed people away and closed myself off from them: writing men off before I take my first step toward the restaurant, wearing the same “comfortable” (read: worn) black dress and strappy sandals to every first date for the last few years, and constantly searching for “deal breakers” instead of just having fun.

I decided that on this date I would actually put forth some effort. I curled my hair, traded in my sandals for six-inch pumps and traded my same little black-so-worn-out-that-it-is-gray dress for skinny jeans and a cute top.

I had decided to walk to the restaurant. But halfway into the trek over there the six-inch pumps became very beautiful torture devices and I jumped in a cab. Because of this, I was fifteen minutes earlier than my date. As I sat outside on the patio next to a necking forty-year-old couple and listened to the echo of karaoke singers belting from an adjacent bar, I realized I had no idea what my date looked like. I had seen his picture and knew he was an attractive man with brown hair, but beyond that I had no serious recollection of what he actually looked like. I smiled and waved at every brown haired guy that walked by, looking for signs that they were Chris, my date.

Chris called me when he got to the restaurant, saving me the embarrassment of starting a date with an unsuspecting stranger. As he sat down next to me at the table I was careful to cross my legs towards him (from what the 90’s movie Clueless tells me, this is a sign of fondness [ed:”That is an unequivocal sex invite.”]), ask him lots of questions, and touch his arm when he said something funny or agreeable (something I read in Cosmo). Normally I would slouch over the table, sip my drink, and scour his face for signs of aggression or delinquency.

We only met for two quick drinks, but overall Chris was the best date I have had, and not only since I started going on blind dates. We had a lot in common and instead of feeling like I was interviewing him, the conversation flowed and didn’t feel forced. There was something familiar and comforting about Chris; I didn’t feel like I was talking to a complete stranger. It turns out we grew up in the same area and spent our youth doing the same things and hanging out at the same places. Oh my God, I thought. I actually like this one.

After our short date I jumped in a cab and met up with my friends. They asked me how my date went and I gave them a sappy grin.

“Don’t go falling in love just yet.” Michael told me. I wasn’t rushing into love, just enjoying liking someone that wasn’t my ex-boyfriend for once. I am picky and hard to please, so when an actual crush comes along I become giddy. It’s always more fun when it’s new, before you learned each others flaws, before you’ve hurt each other, before you’ve had time to build resentment.

But when I checked my phone a few minutes later I received a text from Chris: “It was really nice to meet you. I had a lot of fun.”

I smiled my goofy fourteen-year-old-with-a-crush smile.