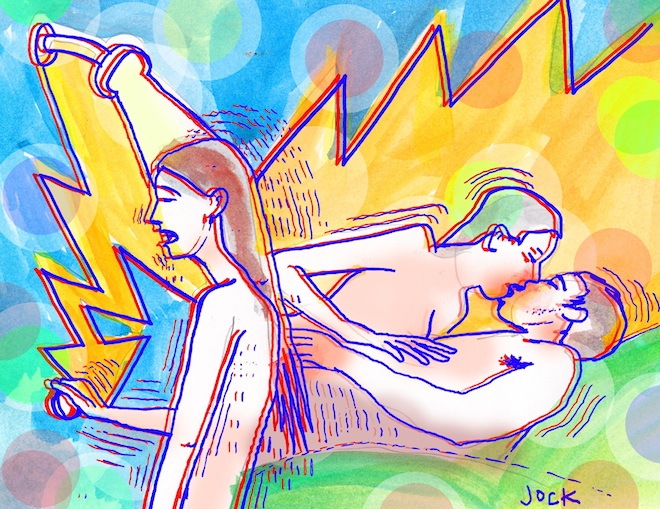 I had just graduated from college and was suffering a terrible heartbreak when I decided to meet an old crush from high school, let’s call him Evan, in Buenos Aires. We had met in Spain during a school year abroad and both spoke Spanish fluently. From there, we planned on travelling to Brazil and then returning to Argentina and get jobs teaching English. We both had very limited resources. We figured we could travel for six weeks before we’d need jobs.

We traveled to Rio on a bus. This was a terrible idea, but at twenty-two I basically had one terrible idea after another. At night, trying to sleep on the bus, a man had crawled down the aisle and proceeded to grope around under my seat. He did this without any stealth, loudly in fact, very noticeably, because he was a big man. I grabbed my bag which sat at my feet and held it in my lap. He’d tug at it, making strange noises. Feeling somewhat alarned, I woke Evan. “Evan! Evan!” I said, shaking him in his seatwhere he slept next to me. It was a twenty four hour bus ride. I had a walkman and played the cassette “Like A Prayer” by Madonna incessantly. “You’re not in love with me anymore”, Madonna sang, filling my heart. My ex-boyfriend in Boston was not in love with me anymore. Evan said, “How can you listen to that crap?” And then he’d put on his walkman and listen to Black Sabbath.

Was Evan in love with me? No. But he was in South America with me. For four long years I’d let my lust for him fester and now here we were, together. My heart was still in Boston, but my desire for him was as strong as ever. I’d lost weight after the break-up, and my hair grew past my shoulders and was dirty. Bathing in cold showers in South America grew old quickly. Our budget meant we often stayed in five dollar a night hostels which if they had running water it was never hot. Evan’s hair was shorter and therefore less nasty looking, but after a few weeks, we both looked rather wild and dusty. I wore the same fucking canvas espadrilles every goddamn day and my feet smelled like vinegar. “Your feet smell like vinegar”, said Evan one night, as we undressed for sleep. This was somewhere in Brazil and we still hadn’t slept together. I didn’t blame him for not making a pass at me. After all, my smelled like vinegar.

Rio was fun. We stayed for a week. We splurged on a decent hotel in the Flamingo district. It cost fifteen bucks a night and was- clean! Evan, like any red blooded man, loved the Brazilian women. All those round, brown asses shining at us as we visited the city beaches, their thick, black hair cascading down their backs. I bought a Brazilian bikini, one with a thong that rides up the crack of your ass. I was trying to fit in. But I had given up shaving my legs and armpits because of the freezing showers, so the effect wasn’t quite what it should have been. Evan let me know that. One night, a high end prostitute attached herself to Evan. She was lovely. She wanted him to buy her dinner, drinks, and so forth. Ed blanched. If he bought her stuff, would he get what he wanted? Was it worth it? We were on a tight budget.

We left Rio on another goddamn bus. We decided to make some stops along the coast. Florianapolis was one of them, a supposedly gorgeous beach town. I don’t even remember having a guide book but we had some ideas of what to do.  Unfortunately, that day, exhausted and broke, we decided to walk to the nearest hotel. Lesson number fifty-three: Don’t stay at the hotel nearest a bus station in a developing nation. With our backpacks weighing us down, in the heat of a midday sun, we passed a line of extremely young girls, in tight, tiny miniskirts and four inch heels, all standing there patiently and waiting for some work to come up. They all had the same large, dragon tattoo on their muscular calves. Evan and I checked into the hotel. We wanted separate beds and so payed ten dollars for a room that smelled like mildew. It wasn’t just my espadrilles and feet that smelled badly. After resting up, I showered. There was hot water! I lingered. I washed my hair! My hand touched the shower head and stuck. Really stuck. I was being electrocuted. The water was being heated by an electrical wire in the shower head. It hurt. I slammed around the shower stall. I saw white spots. I screamed. I passed out and the weight of my body pulling down broke my finger free from the shower head. I screamed and cried and ran back to our room. I told Evan what happened. “Fuck” he said. “I thought you’d been raped.”

We went down to eat at the hotel. It was a disgusting buffet. The girls with the dragon tattoos were all there with their trays, filling up on cold spaghetti noodles with a dubious looking red sauce.

Later, in Montevideo, where we spoke the language and where everything made sense, where we had a beautiful room overlooking the main plaza and I showered in hot water and didn’t get hurt, we went out for an amazing dinner and drank a bottle of expensive, bloody red Chilean wine. Afterward, we went dancing. We danced until four in the morning. When we returned to our room, in the darkness, from across the room, from his separate bed, Evan said, “Come over here.” I did. Do that again, he said, at one point. I did it again. We screwed one more time, the day before I returned to the States. It was broad daylight and seeing our flesh rabid for each other upset me.  I flew back to Boston the next day, after two months in South America. I never taught English there, but when I arrived in Boston, I knew I had to pack up and move. And I did.