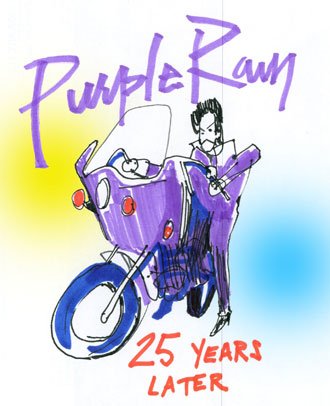 The Little Prince of Purple Rain

It’s been a rough season for ’80s pop. The summer of 2009 has seen Michael Jackson go down somewhat ingloriously, only to rise again in death, forgiven for our incessant gawking at his late public misadventures and/or overexamined life. Then, close on heels, John Hughes, the period’s auteur of adolescence passed. Thank god we still have the indefatigably funky Prince going strong. 25 years after his sorta-biopic’s release, it’s time to reflect on a film that captured best perhaps the ’80’s raison d’être, Purple Rain, released during the apex of Prince’s reign (thank god we no longer have to call him “the artist formally known as” even though I just did). Review by Rayvon Pettis, who is, incidentally, just a tad younger than the film itself. Art by Danny Jock.