It seemed like the type of thing that could only happen in a cinematic equivalent of Fantasy Baseball, that Werner Herzog would direct Nicolas Cage in a sequel to Abel Ferrera’s sexually graphic 1992 cult film. It was enough to make you picture Cage shaking off the shackles of too many action movies, opening and closing his hands as if realizing his autonomy for the first time. And yet like so many fans and amateur sports statisticians, who thought they had the perfect starting lineup, Bad Lieutenant finds itself deservedly shut out of the playoffs. 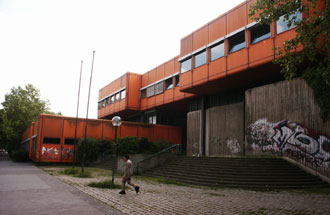 Berlin in the last days of Hitler. A travelling spot on one’s foot. Bicycles. An accident. Matty Byloos delivers one of his signature surreal stories in the tradition of Kafka, tinged with the neuroses of Bernhard.