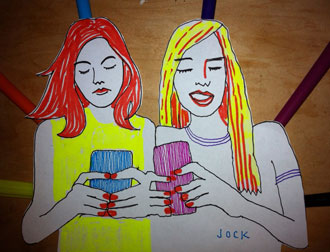 Desperately seeking to be included in the exclusive, über-stylish, possibly non-existent upper echelon of Al-Anon… or at least not to be left sponsor-less and head-hunted by Christians in Studio City. Part VI of Malina Saval’s search for a sponsor. Art by Danny Jock.

Sponsored in Part V: You Can’t Have Your Sobriety Cake and Eat It Too

In the fifth installment of Malina Saval’s Sponsored in Part, metaphors fail. The author examines the difference between her own relationship with Al-Anon and that of her husband, that of other Al-Anon couples, and that of the (hypothetical, mythical) sponsor. And the warm, wet-cement feeling of satisfaction (or was that the carbs?) begins to harden in the gut. The cake is a lie. Illustrated by Danny Jock. 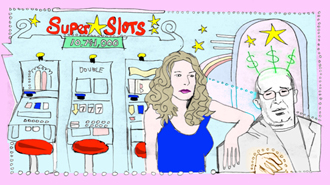 "If the Sopranos were Jewish, steeped in massive credit card debt, and lived in a dreary middle class Boston suburb where flabby white trash girls with high, hair-sprayed bangs walked around with their pants sliding down the crack of their tramp-stamped asses, that would give you a pretty decent idea of the kind of environment in which I was raised." In Malina Saval’s fourth installment of Sponsored in Part, the Saval family, in all of its extremities and generations, runs amok in a restaurant, practices avoidance, redefines what it means to be alright, seeks sponsorship in all the wrong places, bets the farm on eternity (death on the installment plan), and cashes in big time. 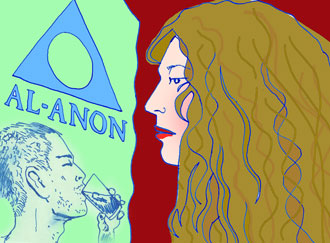 In Malina Saval’s third installment of her Sponsored In Part column, we start to see some Al-Anon fatigue as the breadth of her day-to-day responsibilities begin to pile up, and she still without a sponsor to help her along. There are some funnily awkward moments, some exasperation juggling her family life, her work, her sanity, and her husband who seems to be benefiting quite well from AA with seeming small recompense to the author. 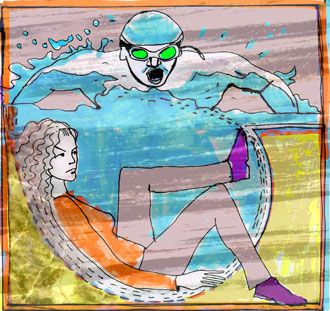 Malina Saval continues her quest for an Al-Anon sponsor in the second installment of her "Sponsored in Part" column. This time around she’s lost her therapist in addition to being sponsor-less. Looking for some kind of guidance, she finally starts to reach out, with mixed results, but she’s getting there. Drawing by Danny Jock, as always.

Malina Saval is the author of The Secret Lives of Boys: Inside the Raw Emotional World of Male Teens. She is also a member of Al-Anon. A sponsor-less member, much to her desperation, as she struggles alone with her husband’s addictions, her family life, her own anxieties and moments of self-doubt. As someone once said, "I’ve been out to sea a long time." This is the first column of Malina’s that will chronicle her search for an Al-Anon sponsor.