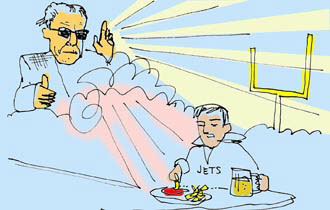 Lamenting his "off" betting in the championship games, Jon Weissberg returns to assert that it’s time to give a little brother some, Eli that is. Giants meet the Pats on Sunday, and don’t you think Tiki wishes he was there in uniform? (That’s Jon in a – whoops – Jets hoodie overlooked by Ham On Rye from Heaven by Danny Jock). 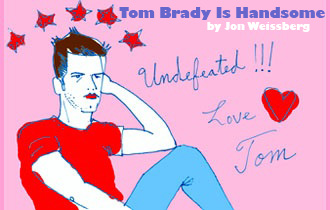 It’s the the last day of football before the superbowl. Chargers play the Pats and Bret Favre and crew take on New York’s Giants. Last week, Jon Weissberg and friends finally noticed that not only can Tom Brady execute some pretty fine work in under two minutes, but that he’s also, admitedly (in the most objective terms), pretty fine. Let’s see if Jon’s predictions hold up over the next few hours. Read fast! Undefeated Tom drawing by Danny Jock.