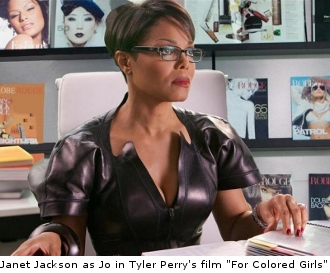 Ntzoake Shange’s choreopoem For Colored Girls Who Have Considered Suicide When the Rainbow is Enuf was first produced in 1975 in a bay area bar and has since appeared off-broadway, on broadway, PBS and innumerable iterations on college campus — in a way that to my mind recalls the viral popularity of something like Eve Ensler’s Vagina Monologues. Comedian and performer Desiree Burch takes a look at Tyler Perry’s aesthetic and what it means for the film adaptation. She finds much to praise in the ensemble cast but, in addition to all the other colors of the rainbow hears the melodramatic speechifying of a tiny man dressed in gold.