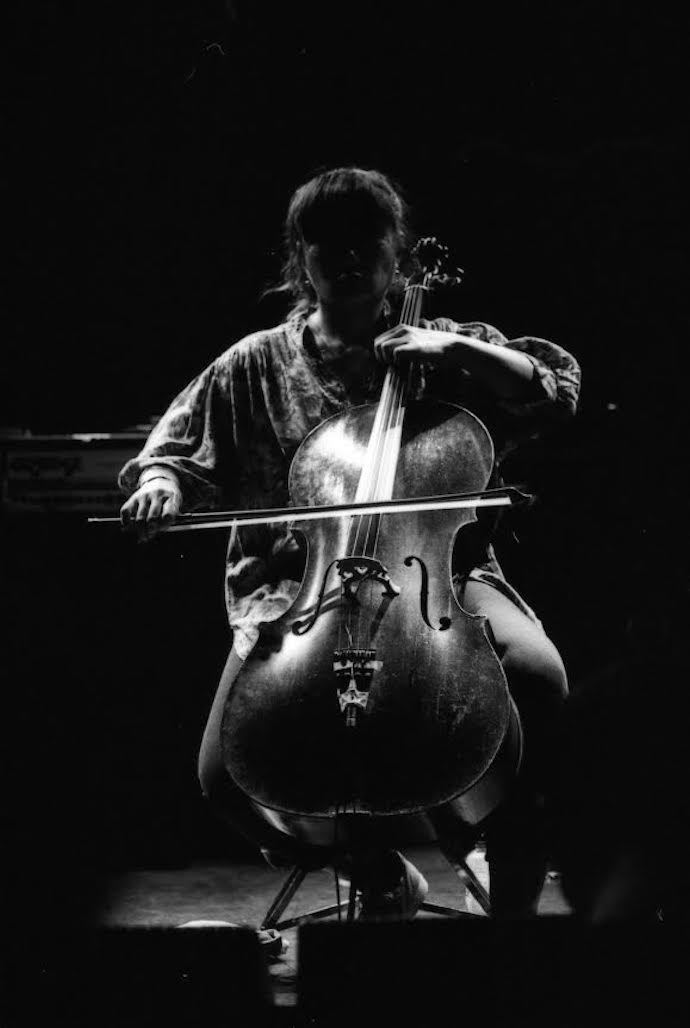 The first time I heard Okkyung Lee’s music (her monumental album “Ghil“) I thought of Coltrane’s later recordings and Kaija Saariaho’s cello works—a beautiful noise—terrifying—virtuosic—Music that arrives in such a violent rush of new that one claws for comparisons to old, simply to hang on. Simply put, her music immediately became an obsession of mine, and an ideal (as if my writing could ever capture such incredible sound). So I was immensely grateful to get Okkyung Lee’s take on George Dyer, as reflected through the gaze of another artist of immense originality and beautiful terror, Francis Bacon.

OL: after spending a couple of hours wandering inside tate modern museum some years ago on a particularly crowded day, i found myself sitting on a couch that was in the middle of the room facing directly into the portrait francis bacon made of george dyer. it was a painting of his profile with his eyes closed or looking down rather shyly that was blurred in a true baconian fashion which seemed to me that it wasn’t just the face of george dyer but also reflection of bacon himself imposed upon it . . . while looking at the painting through so many people’s bodies passing in front, some taking a quick glance at for a second and moving on, some not, i felt this sharp sting inside for george dyer . . . i didn’t know too much about bacon’s personal stories except through a few scenes of that movie i saw on bbc with derek jabobi and daniel craig to know that their relationship was turbulent and tortured in many ways . . . then while looking at this painting of dyer by bacon, this one of the greatest artists of our time, i felt how powerless dyer might have felt… it was only through bacon’s painting of him, dyer’s existence came to touch so many others and even brought the meaning out of it . . . and knowing that bacon knew who dyer was intimately painted him in such a way that was so exposed and easy to be projected upon, this idea of him being portraited made my heart ache . . . i stared at the painting for at least good 10 minutes and wondered . . . and yes, of course, i was and am projecting my own interpretation as well but it was really quite an intensified feeling i felt that moment and felt the loneliness of the painting and its subject and maybe even of bacon’s in a sea of people . . . .

RK: I love this idea of viewing a portrait as a layering of personalities and projections. Do you find this common to all portraits–or even works of art–that the artist–no matter their attempts to reveal the truth  of their subject–essentially portrays themselves? And I suppose that the viewer, in interpreting the work, only reveals themselves? Or is this sense particular to Bacon, and more specifically, Bacon on Dyer?

this one was and still probably the only portrait i saw it that way . . . i mean of course all the work has some part of the painters/creators in somewhere but this one seemed to very clearly a blurred reflection of both the painter and the paintee . . . but then it wasn’t the only reason why this one struck me so strongly but really the sense of powerlessness i felt, which i am definitely projecting on dyer’s position in the relationship…

You dedicated your album Noisy Love Songs to Dyer–I’m curious about that dedication in the context of this conversation (which Dyer, for instance, did you dedicate the album to–Bacon’s? Your own? Dyer as he was?), and also how any relationship you see between the songs on your record and the portrait by Bacon.

no, i didn’t write with those pieces with him in mind but once i put them together as an album, i just wanted to dedicate to him . . . i do not write music to convey any specific emotions or ideas… they are usually just melodies i have in my brain . . .

I can certainly appreciate that. Intention or direct influence aside, do you see any tendencies in your work that also exist within Bacon’s painting?

i wouldn’t say my work shares any tendencies with bacon’s work . . . but it’s more about when the artist behind the work comes through in such a personal and honest way, you cannot deny that power and that touches me more than anything else . . . hopefully one day i’ll get there . . .

but again i wanted to talk about george dyer and not only bacon which proves my initial point about the painting and the paintee . . . ha ha ha . . . .

My final question then is what is owed to the paintee–in this case George Dyer–by the painter and by the audience? What responsibility does the artist and audience have toward that subject?

nothing is owed to anybody . . . my question or observation was never about that . . . it was more about my curiosity about what he might have felt to be portraited by someone who was able to bring out such an intense emotional side, whether projected or not, in a way that he probably couldn’t have done it on his own . . . .

Okkyung Lee, a New York-based artist and South Korea native, has created a body of work blurring genre boundaries through collaborations and compositions while testing the limit of contemporary cello performance techniques. Her music draws inspirations from noise and extended techniques, jazz, Western classical, and Korean traditional and popular music.

As a composer, her recent works include Cheol-Kkot-Sae (Steel Flower Bird) for 2 traditional Korean musicians and 5 improvisers, commissioned by SWR2 in Germany for Donaueschingen Music Festival in 2016, and still hoping for a miracle…? commissioned by Borealis Festival in Bergen, Norway in 2017.

Okkyung was recipient of Doris Duke Performing Artist Award in 2015 and Foundation For Contemporary Arts Grant in 2010.