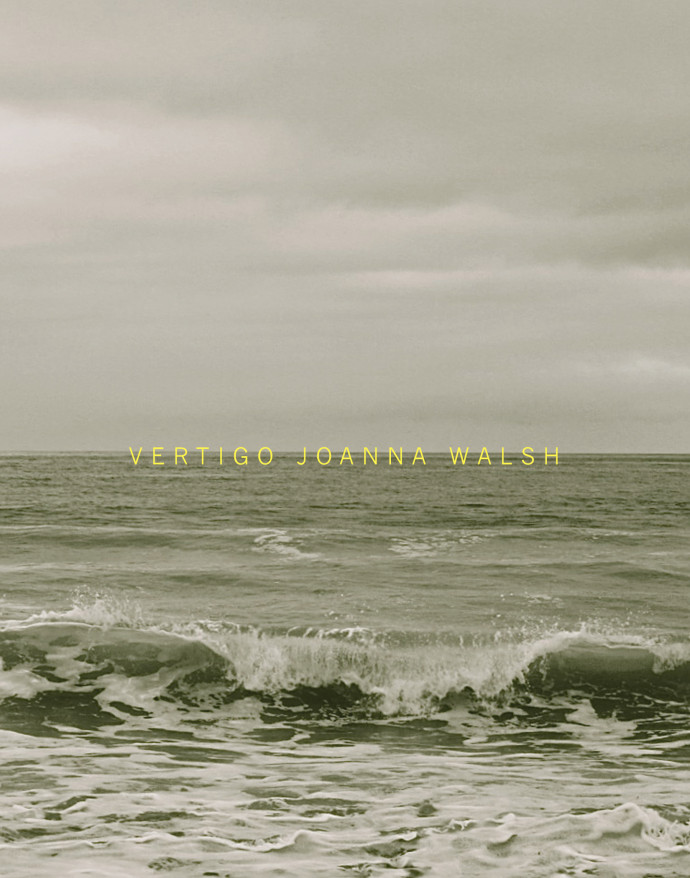 I am reading Joanna Walsh’s book, Vertigo, at the seaside. One of the first things I notice about the book is this—if I hold up the cover in front of myself, at the right distance and height, I can match the horizon on the cover of the book, which depicts the ocean, with the horizon of the real Atlantic in front of me. The ocean depicted on the cover is an ocean devoid of event, unless a wave is an event. Around the edges of the book, as I hold it in front of my eyes, are bathers on brightly colored rafts printed with the logos of international beverage companies, children screaming into the surf, airplanes trailing banners with ads for crab restaurants. Events similar to these are sometimes depicted in Walsh’s stories, several of which take place in beach resorts like the one where I am. These events, at the edges of great bodies of water, are the events of human life—but when observed from a great distance they are something like fringe.

The female narrators in Vertigo are capable of inhabiting this distant point of view, and even as they live among us, consume meals and argue with their partners; as they raise their children and vacation at the seaside, they also hover at a distance, above, below, and across rooms from these things, like Emerson’s floating invisible eyeballs. I’m not sure I’ve ever read a book so full of space, though most of the distances are not geographical (some are)— they are distances from which women observe themselves living lives, and although these are lives mostly free of upheaval and privation, the unhurried urgency with which they are observed makes everything here seem vital and dangerous.

In “Fin De Collection,” the collection’s first story, a woman fusses over the purchase of a red dress in a Paris department store because she is leaving her husband. She tells us in the first paragraph that “[t]he right teller can make any tale, the right dresser can make any dress. Listen to me carefully: I am not the right teller.” Indeed, there is no narrator in this collection capable of just telling a tale, and I’m still not entirely sure if the woman purchased the dress or not. Narrative is barely the point: these are stories about living inside a brain, the brain of a recognizable, educated woman approaching middle age. Sure, building and maintaining a narrative is one thing, but Walsh wants to show us what else a brain can do.

These stories may remind readers of Lydia Davis in that Walsh exhibits the same impulse as Davis to syntactically pinpoint—to obsessively get everything in a situation correct, as in this passage from the beginning of “Vagues”:

“There are many people in the oyster restaurant and they all have different relations to each other, which warrant small adjustments: they ask each other courteously whether they wouldn’t prefer to sit in places in which they are not sitting, but in which the others would prefer them to sit.”

By the time this story finally gets around to its characters, we are as oriented as a reader can be. Her intention seems to be to lock us in so that we can’t escape the space, to force us to eavesdrop, to play the role the woman in the story seems to be playing in her own life. The effect is uneasy, and riveting even as what unfolds seems to be nothing more than the slight tension between the woman and her male companion. The only escalation is the unadorned reveal that the man waiting across the table impatiently for his oysters is not the woman’s husband. It comes as a simple fact, without any linguistic hand wringing.

Which is another thing about these women—they don’t panic, at least not outwardly, the way we assume they might (or, were we in their position, we might). They seem to refuse or refute emotions we expect from the situations depicted, or at least these stories depict the subtle thought processes that float above raw feeling. A mother waiting for her child to come through an unnamed medical procedure in “The Children’s Ward” begins by describing the room in which she waits. She looks out the window and informs us that her “body is enjoying looking out of the window, and that is because it has not been asked to do anything for a long time.” The child himself, her son, does not appear in the story at all; instead, there is only a bed toward which the narrator directs her waiting, though as she tells us: “…he is not in the bed, and never was in it, so it may not be the right object at which to direct my waiting.” Later, she ruminates about what she’d do if an intruder entered her home and endangered her children. The story ends before we find anything out, though we have been waiting along with the mother. I don’t know why the story, for me, carries the same amount of emotional disturbance as Lorrie Moore’s all panic-all-the-time “People Like That Are The Only People Here” But by the time I reached the end of “The Children’s Ward” I felt I’d been through the same wringer as Moore’s story put me through when I read it years ago.

The collection ends at the ocean. “Drowning” starts with a woman walking alone along the streets of a holiday town in who-knows-where, Europe, wearing a bikini she believes she may be too old to wear. We have been informed that she “has very little on [her] mind.” She has swum across the bay, leaving her children with their father in order to see a hotel in the town. She tells us that the hotel is beautiful, but the description she provides of the hotel isn’t a testament to whatever beauty there is, just a sketch of the structure itself—a white building, rows of windows, iron balconies. The beauty, it seems, was never the point. She swam, she saw, and now it’s time to swim back, back to the children and the husband. The swim back, however, is somehow more daunting, in ways that evoke the final passages of Cheever’s “The Swimmer.” Suddenly, “summer’s already turned its back.” Exhaustion weighs down this swimmer’s limbs. In the middle of the bay, she questions whether raising her arms to summon a distant boat may deplete her to the point of death. “Shall I tell you what it is like to drown?” she asks. What follows doesn’t reveal whether the narrator actually drowns or not. She considers her children, her marriage, her status as a reliable and upright citizen: “We do not shout in the street, and when you stand next to us on the bus we do not smell bad.” Who can say that these are not the final thoughts of a drowned woman? None of us has drowned and lived to tell about it.

Back to the beach, Walsh’s beach, my beach. It’s a summer of sharks. Recently some children were attacked and lost limbs just a few miles from where I sit reading, but everything here is fine now. Walsh doesn’t need sharks, she just needs the water. In the final line of “Drowning” Walsh’s narrator, somewhere out in the bay, imagines reaching the shore. The line is a doozy, so much so that I want to type it out here, but I won’t, because you should earn your way through the collection to get to it. Getting there is like swimming. Arriving is like drowning.