An Interview With Young Family 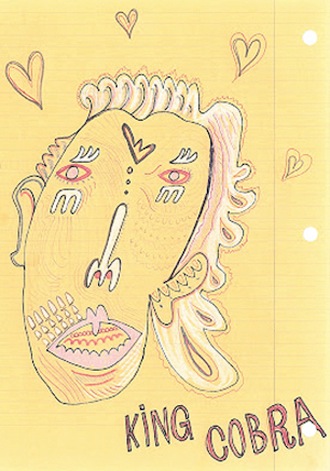 Sam Pink & Kelly Schirmann released a 4-track EP called You Ruined It in September of last year (soon to be remastered & reissued), under the name Young Family. Now they are ‘nearing completion’ of their first album, King Cobra.

Sam Pink has released 9 books (all of which you can find on Amazon) & 3 chapbooks. His habitat on the web is here. In addition to making music & writing some of the most engaging contemporary work I’ve read, he illustrates all his book covers (& the cover for King Cobra). The man is prolific.

Kelly Schirmann is no slacker either. In addition to making music, she writes poetry & makes beautiful collages––often blending the two. She has recently exhibited her new collage series NEW MINE at People’s Yoga Northeast. Find her work online here.

FANZINE: Hey guys, can you tell me how you two first connected with each other?

SAM PINK: I was searching Craigslist for a Bowflex and saw a ‘rant’ posted by ‘big_sherm69’ about how McDonalds is killing and processing citizens from her neighborhood and how no one will believe her blah blah something something. So I contacted her and said how I was a businessman from London and how I needed someone in the US to run errands for me while I was in town and how I’d need her social security number, her birthday, and her bank account number.

KELLY SCHIRMANN: I urge everyone reading this article to write a letter to your congressman, district representative, dentist, judge, ex-camp counselor, person you slept with once while drunk at a party & now feel low levels of embarrassment around, literally ANYONE you’ve ever interacted with via Craigslist, and/or other meaningful authority figures about this McDonalds issue. It has gone on far too long to ignore. We will not be silenced any longer!

FZN: How do you compare/contrast the experience of making music to that of writing?

SP: For writing, if I read/edit a line then mime yelling into a microphone and then airdrum a ‘blast beat’ drumbeat, then it’s good. For music, if I’m listening to it and it makes me do this one dance I do where it looks like I’m writing on a wall with both hands, then it’s good.

KS: Making music to me is much more of a physical experience. It feels really, really good to me to sing. Writing poems requires much more of my mind, although I think for either one I care much more about generating feelings in the reader/listener than making narrative sense. Both have a writing element to them, but I feel like in both cases the words are just a means of representing what’s happening behind them: for songs it’s Sam’s music, for poems it’s my mood.

FZN: What was your musical background before Young Family?

SP: I could never find a good bandmate.

KS: I have played in a few bands besides Young Family that didn’t last long, & mostly I recorded by myself under the name ‘headband.’ I don’t have any training in music so they are pretty simple, lo-fi sad bedroom folk songs, but I like them. You can find them on my bandcamp or soundcloud.

FZN: Are there any artists who particularly impact the way you make music?

SP: I can’t think of any. I feel inspired by things I don’t like anymore I think. For King Cobra though I had the radio on a lot, on 98.7 the Chicago classical station, and I think it made me feel interested in making more complex melodies.

KS: Chan Marshall & Phil Elverum come to mind, just because especially in their early albums they didn’t seem to be crafting their music for anyone in particular, but just capturing some kind of natural interior runoff.

FZN: Tell us a little about King Cobra.

SP: We decided to name it King Cobra because we were talking about what 40 ozs we like, and King Cobra 40 ozs are my favorite. Fun fact: King Cobra is also the street name of the guy who started the Chicago street gang Spanish Cobras.

KS: Yeah, I feel like we kind of ‘upped the ante’ on this one. You Ruined It was a total experiment & the first things we tried to collaborate on, so I feel like we were able to take the things we liked from that album & augment them. Most of our correspondence for King Cobra has to do with pepperoni, pickles, special sauces, ‘levels of spicy’ etc, which leads me to believe it will be even tastier.

FZN: What is the first & last album you remember buying?

KS: TLC’s Crazy Sexy Cool was my first. The last thing I bought was Ex Tropical by Lost Animal.

SP: I think the first tape I bought was the “Smells Like Teen Spirit” single, with “Even in His Youth” on the b-side. I can’t remember the last album I bought, maybe Mr. Impossible by Black Dice.

FZN: The blend between Sam’s dark bassy electronic playfulness & Kelly’s dreamy vocals strikes a very strange & original balance. Were you ever nervous about whether the two would have trouble ‘meshing’?

SP: I knew I wanted to ask Kelly to sing, because I was already a fan of her music/singing and knew that it would sound good over what I was doing, because you don’t hear anybody with a voice like hers singing over poppy/sad electronic music. Whenever I hear singing over electronic music, it always sounds like the person is trying to be ‘sexy’ but with Kelly, it just is sexy (to me) because her voice is so strong. She has that ‘white trash blues’ type of tone. I also knew that I prefer music that doesn’t sound too slickly produced, which most electronic music does to me, so I knew the style I’d be using would fit with her voice well. I feel like I was interested in doing this because it’s basically two people with no background in this type of music trying it out, which seems like it would make something interesting.

KS: I don’t think there was ever a period of worrying if it would mesh because it was such an accidental thing. Sam emailed me asking if I would sing over some of his songs & I was excited to do it. He sent me the four tracks that are now $, $$, $$$, & $$$$. When I put vocals on them & we listened to them I think we both just felt like, damn. I remember Sam’s response after I sent them back just said ‘This shit quieted me.’ That’s the first time I think we decided to put it out, because we were so excited by what it was.

FZN: When you hear music, do you ever ‘see colors’ or ‘see scenes’?

SP: No but like, I don’t know how to explain this, but sometimes I have thoughts that aren’t words while listening to music I like.

FZN: On your Bandcamp release, you tag things like ‘electronic dub-step literary nightmare’ & ‘sad dance-pop apocalypse.’ Are there any other tags you could give us?

SP: Kelly called them ‘crunk hymns’ in an email once and I like that. Feel like I could see a music reviewer using ‘electro-lullaby’ too. Can also see someone saying, ‘big sherm’s soothing spectral croons make for excellent sauce over the halt-step doom bass melodies of DJ CARL WINSLOW.’