An American Landscape: Fourteen Stories, None of Them Are Yours 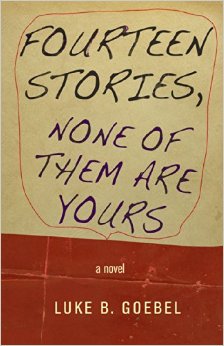 Fourteen Stories, None of Them Are Yours
by Luke B. Goebel
FC2
184 pages

Goddamn, Luke B. Goebel is an American writer. And not in the often-hijacked, flag-waving definition of the word – but rather, someone whose stories feel like they were grown from the bones of Faulkner, of Whitman, plus the flung-off brow sweat of Denis Johnson and Joy Williams. Goebel is also that other now-lost American thing, an anarchist artist; an anarchist of a poet of a storyteller. In this appropriately titled novel-in-stories, Goebel lays out a language made of blood and guts and leather and a little bit of peyote, a language that speaks the closest thing to some sort of American myth making that I’ve come across in a long time.

But put that aside for a second, because maybe that’s a lot to live up to for a book you haven’t read yet. Maybe we should step back into the landscape. Let me take you through it bit by bit, ease you into it. Draw you a map.

There is, first of all, language. Ecstatic and weirded and braided through the strangeness of the world – a mirror held up to the American way of being utterly, joyfully divided. Goebel’s narrator is a troubled, grateful soul, and the feral, full-of-marvelous-pain syntax and structure in these stories shadows that. Here, for example, the narrator gives us backstory as a hymn, as a wild prayer:

I went to the San Diego Jesuit University church this morning and wept and wept and wept, reaching into the celestial heavens…and with this dirty story you’re going to read; me in church with my spirit Indian non-Indian nonhuman self in church thinking the wrong words, from moment to moment in California, on a hill and a great cathedral, in an architectural heavenly kingdom of Spanish-y mission buildings and gardens, hearing the wrong words in church, the old crazy in me of the old lunatic in me who has seen much with his eyes and heart open and his head miss wired and the things I see are tilted to one side and then another and I cannot see straight lines, firing too fast in all lines, but still I reached up into the celestial heavens of the creator of the universe, and then had a $50 brunch of crab legs and brought oysters and roasted meat and drink sparkling water orange juice and walked around a graduation ceremony and lived through the families and couples.

And of course, the language does something else very American – it’s darkly funny as hell. Much of that comes from the narrator’s outsider status – he’s an observer, even if he’s a little off, or more especially if he’s a little off, and that disconnect leads to some intentional and unintentional humor. “She talks of Anus Parade Nursing Homes,” says our narrator of his old lady neighbor, strung out and half crazed as he is in a hospital bed listening and mis-listening to all the language around him.

As a wanderer, a sort of cowboy without the cattle, the narrator becomes something else – a seeker. He’s seeking what is lost – a girlfriend, a brother – but more than that, he’s seeking some elusive truth in this modern era that does not love drifters, even the purposeful kind.

“But all I want is to be off this planet,” Goebel writes, “in the next world and the next. I’ve never been comfortable. Except on a wild tear, like you’re about to hear with this finding the feather business.”

Here’s the part on the map where we turn the corner, where we round the bend, come back to the streambed. Here’s where we talk about the crux of this book, of its American-ness, of its uniqueness, of Goebel’s talent for jarring and just perfect dissonance. Because the soul of this country has always been a joyful pain; a hard-fought, hard-won optimism bloodied with our newish, devilish history.

All countries struggle with a past, but Goebel seems to write the way we struggle here – so hopefully our hearts begin to break almost as soon as we are born, and we never stop being glad for it. As he writes, “I have always been glad to be in the world. I have always felt like I’m getting away with something being alive.”