Last week we posted this controversial article in the hopes of opening conversation about the quiet ways institutionalized racism, sexism, and homophobia operate in the alt lit community. Unfortunately, as a result of some of the article’s language, conversations steered toward the two members of the community who were implicated, rather than the real issue of minority representation. In the interest of continuing the discussion of this difficult and important topic, we have decided to repost the original article with the names removed. It is our intention to point out that responsibility lies within all community members to hold publications accountable for actions that alienate marginalized groups.

Several notes on points that seemed to be confusing for readers in the previous incarnation:

1. The intention of this article was not to pin responsibility for all racism/sexism/homophobia of the Alt Lit movement onto the two writer/editors mentioned. In fact, racism, sexism, and homophobia are the results of implicit acceptance of these institutionalized “isms” and complacency. The two writer/editors mentioned were used as examples of this type of behavior in action, but were certainly not meant to be seen as the root of all instances of quiet racism/sexism/homophobia in the movement.

2. There was some confusion regarding the author’s use of the terms “Real Race Problem” and “Fake Race Problem.” These designations were intended to point out that obvious racism is not as insidious a problem as the quiet racism that exists within the community. The author’s argument was that obvious racism is easily recognized as such and dismissed, but the quieter version often goes unrecognized and is often upheld by members of the community.

3. The term “token” was not used in any attempt to marginalize or implicate the talents of any writers in the community, as was suggested by some commenters. The academic definition of this term describes tokenism as “the hiring or employment of a few members of minority groups to deflect accusations of prejudice or racism without actually making the effort to be truly inclusive.” Use of this term was meant to describe a practice wherein editors include a couple of members of minority groups as a “token” gesture,rather than making an actual effort toward diverse representation.

In reframing the article in this way, it is our hope to steer the discussion back toward the real issue at hand: minority group representation in the alt lit community. It is our goal to foster open and productive conversation around this and other issues of note to our readership.]

I’ve followed Alt Lit since 2011. I’ve followed Tao Lin and HTML Giant and Alec Neidenthal since before I even knew what Alt Lit was. I am not Alt Lit and neither are most of the writers I read on the Internet but I will likely follow Alt Lit forever because Alt Lit is how I met one of my bffs, Frances Dinger and got acquainted with the work of one of the most important living writers, Roxane Gay.

Basically, Alt Lit means a lot to me, so when something is amiss in the world of Alt Lit, I care. Usually, I care from afar like last year, when Alt Lit lady Hazel Cummings raised valid points about the circle jerk and bro-ish nature of [online publications] ███████████ and ████████████. I didn’t say anything then but I feel compelled now to respond to recent happenings in the Alt Lit Gossip Facebook group.

Known for his vulnerability, Stephen Michael McDowell posted this screencap, saying that the whiteness of Alt Lit has made him feel “consistently alienated.” 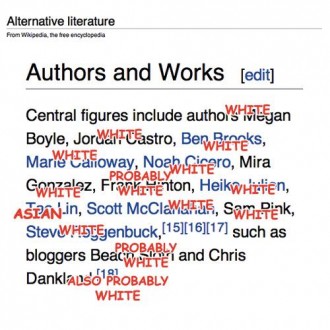 The above screencap isn’t shocking. Wikipedia is a site anyone can edit, and more importantly, everyone mentioned is in fact influential and relevant to Alt Lit. However, that doesn’t mean we shouldn’t talk about the fact that at the time that this screencap was taken, all the central Alt Lit figures mentioned were white and/or white-passing, which is why I’m glad Stephen Michael McDowell said something. I am also very disappointed in the blatant and subtle displays of racism. The fake problems and the real problems.

Quote from Facebook post by Alt Lit writer █████ ] : “What the fuck is wrong with you?! Seriously?! You want us to care bc you’re a shitty black writer? You already got a college discount. Take it and leave.”

Disregarding the fact that this █████ person is a nobody who will always be a nobody and disregarding the fact that he employs lazy stereotypes to get his nonexistent point across, what is wrong with this post? What’s wrong with this post is not that it’s blatantly racist. What’s wrong is that it’s low hanging fruit, in terms of Alt Lit Racism. Calling out this kind of stuff is a waste of time because we can all agree that this █████ fellow is offensive. That’s why there are no likes on his comment(s). He’s an obvious troll. This is a fake problem.

The subtle and often silent ways people within Alt Lit uphold white supremacy and keep Alt Lit an exclusionary white male space. One of the ways this is done is through ignoring the creative efforts of everyone who isn’t in the White Boy’s Club of [online publications] █████████ and ████████████. If you’re not one of the █████████ and ███████████ tokens or a girl Alt Lit bros deem attractive, then your work will likely be slept on or tokenized.

Laurens Verdonkschot, a longtime contributor to Alt Lit discourse, says that Alt Lit does have a problem with regards to representation of people of color. “You gotta come correct, if you’re a person of color and want to make an impact or garner any kind of attention because at any moment some wacky white person with some throwaway quotes about apathy and prescription drugs will upstage you.” In the case of ██████████, that upstaging happens like this: 1. Consistently post flagrantly racist, sexist and homophobic things online and 2. somehow keep being supported by most of the white dudes of Alt Lit.

A couple months ago, ██████████ made a Facebook status saying he wished he were a black man so he could be cool. Sometime before or after that he called ██████████, a gay Alt Lit person, a “faggot” and said he wanted to bash his head in. He said all of this and yet some people still defend him. ███ is one of those people. Yesterday, ██ made a thread on Alt Lit Gossip, defending ███████. ███’s thread coincided with Stephen Michael McDowell’s thread. Instead of defending Stephen Michael McDowell from the racism in the comments or offering him support in some way, ██ defended a racist. ██’s thread has since been deleted by ██ because Zero Accountability, so unfortunately there are no screencraps. However, there are quotes! These are quotes I managed to save, before ██ deleted his thread:

“Wanting equality will not making [sic] anyone a popular writer.”
– ██

“Anyone could start their magazine. I’d like to think it could be popular if it was good. I don’t think my mag is popular because I’m a WSM [white straight male], but maybe it is (?) you guys tell me…I seek out the to-me most exciting writers and then put them in one mag that has included minorities and women and gay people. But maybe disproportionate white people. I haven’t counted.”
– ██

[If you’re skeptical, ask anyone who was involved in the thread or lurked it.]

2. ██████, ██’s online magazine that’s actually a compilation of pdf files containing the writing of 30+ of the same mostly white, mostly white-passing people over and over again, is apparently “popular.”

3. ██ seeks out the writers he deems “exciting” and then puts them in his magazine. Some of those writers are token black people, gay people and “minority” people.

Sadly, most people will focus on obvious trolls like █████ and ██████████, when we should really focus on the efforts of Alt Lit contributors of color like Stephen Michael McDowell. Whenever ██ decides to think not as the resident boy-king of Alt Lit; but rather as a human being who can, presumably, understand and share the feelings of non-white people–beyond his chosen tokens–the sooner issues like this can be resolved.