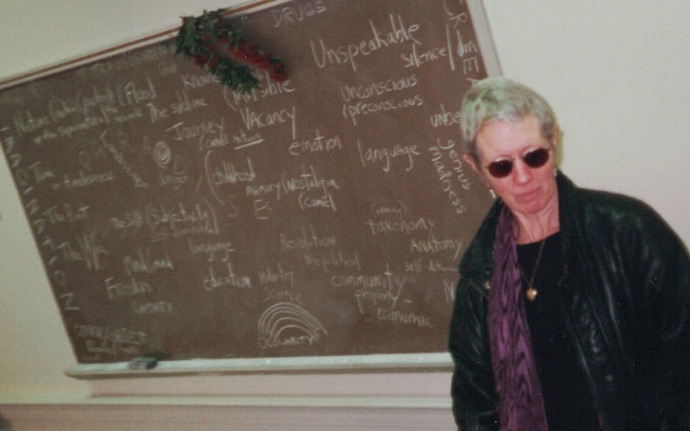 It’s December 1996, and Lyn Hejinian is in front of a board covered with her writing, and I’ve climbed over a table and onto another to capture this geography of words despite her admonishment of no photos. Lyn survived cancer and has short hair. In the beginning of the semester she wore a scarf on her head. Now she looks avant-garde in spiked short hair and black leather jacket.

On the board Lyn wrote words or phrases such as silence, the imagination, and the unconscious/preconscious with attention to form and spatial relationships. Ocularity radiates an arch upon which Science rests; a whirlpool and danger exist in paradise. Memory is coupled with nostalgia, which I experience when I return to this photo.

Twenty years later the Aerial issue focused on Lyn Hejinian’s writing creates a similar feeling as well as a sense of purpose. Assembled over the last decade by editors Jen Hofer and Rod Smith, Aerial 10 is a festschrift that includes responses from Barrett Watten and Leslie Scalapino alongside previously uncollected selections from Hejinian’s poetry as well as interviews and correspondence with poets such as Clark Coolidge, Alice Notley and Susan Howe. Much of the work demonstrates Hejinian’s interest in forms, theory, aphorisms and processes, though you also see Lyn’s playful side as in the letter to Fanny Howe when she jokes about drinking too much coffee. 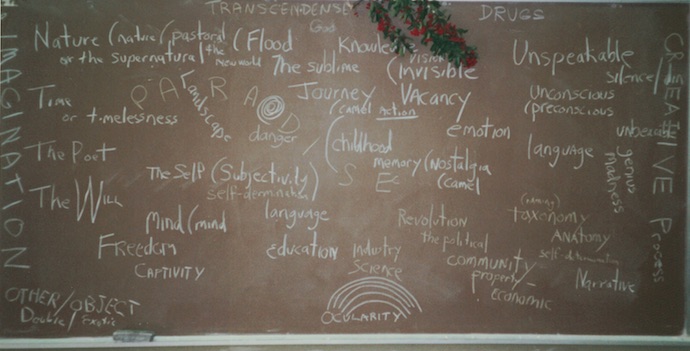 Kevin Killian’s piece in Aerial 10 about a marathon reading of Gertrude Stein at New College of California evokes the spirit of the Bay Area poetry scene in the final decade of the last millennium. The “poetry wars” that erupted in the late 1970s and 1980s with the arrival of the Language Poets are more or less over, though tensions still lingers amid the high arched ceilings of the theater, a retrofitted mortuary chapel. This is the same neighborhood as Aerial 10: poetics and ghosts.

Katy Lederer’s piece in Aerial delineates the challenge to any approach to Hejinian’s work focused on biography: “[I]t is hard for me to write a memoir about Lyn because her entire sensibility, at least by reputation, is anathema to lyric and memoir as I write it. She is, after all, the author of My Life, which deconstructed the genre of the memoir.”

Rather than focus on Hejinian’s life, Aerial gives context for the way in which Hejinian transformed memoir through the use of collage to present a more realistic representation of selfhood. Ron Silliman’s piece in particular focuses on Hejinian’s use of collage. Through textual examples he shows that Hejinian revised My Life by inserting new sentences into the fabric of individual cells while leaving surrounded sentences unaltered. In this manner Hejinian approaches the sentence much like Silliman himself, as thread to be woven but also as shards that suggest the jump-cut mosaic of our lives. In this manner Hejinian presents our divided selves, multiple simultaneous demands on attention, circular thoughts, the grip of sudden memories, emotional states at war, the juxtaposition of perception and consciousness of consciousness, hyper-awareness of the experience of experience. This is a poetry of realism that reflects the discontinuity and distraction of our lives, where the lengthy fire-side chats of Roosevelt have been usurped by sound bites that last an average of nine seconds and the twenty-four news cycle and social media have assumed the role of the storyteller.

But, wait, isn’t nostalgia a luxury? Is lapidary poetry or the formal precision of longish sentences elitist? Does reliance on collage and process produce poetry devoid of humanity? Does a poetics of experiment and inquiry lead to jargon noodling rather than song?

Recently at the Black Squirrel in Washington D.C. I was talking to the poet Lorraine Graham about nostalgia after a reading. Although nostalgia is associated with the sentimental and therefore rejected by modernism, particularly by Stein’s mode of composition in a continuous present, I commented that nostalgia remains central to writing. Lorraine agreed it’s beneficial to have a period of longing for the past; such nostalgia helps us make sense of experience. Through a similar approach Aerial helps us better understand our relation of Hejinian’s work.

Unlike The Language of Inquiry, Hejinian’s collection of poetics, which reflects Stein’s influence, Aerial more clearly demonstrates the enormous impact of George Oppen on Hejinian’s work. Peter Nicholls’ essay in particular traces parallels between Hejinian’s fragmented selves and the sense of numerousness or multiple identities in Oppen’s “Of Being Numerous” and Discrete Series.

Aerial 10 stands up, literally; at 464 pages it is comprehensive and reflective of the weight of Hejinian’s philosophical poetry, though it also contains nods at Hejinian’s humor and playfulness.

Ultimately, Aerial 10 announces Hejinian’s poetics as ongoing, a lasting conversation between tradition and the future, the past and the avant-garde, and helps contextualize the riddle of a poetics and philosophical poetry in our postmodern world: how does nostalgia and poetics affect poetry now? In response to this riddle Aerial 10 replies with a definite YES.