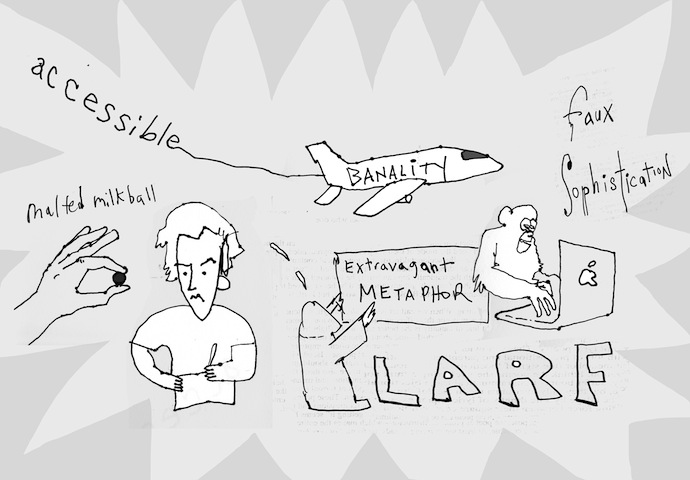 A View from the Factory Floor

The following essay is excerpted from The Force of What’s Possible, forthcoming from Night Boat Press.

As to the question of accessibility in the poems, of course I want to be understood. I’ll give a malted milk ball to anybody that can pin the tail on the poet who doesn’t. Even the noble-cum-ignoble practitioners of Flarf need the mode of their project to be apprehended at precisely the moment—or precisely because—the accidental/incidental/nonsensical content of the poem defies understanding. In order to get anything from their Flarfistry, you need to “get it.” Ditto for Dada albeit a century earlier. Though the tragically hip can hardly be bothered with who gets what exactly, maybe we can agree that if nobody got anything we’d be better served torching the library and installing the chimps at the MacBooks. Sure we would, but I still believe in poetry.

Anyway, “getting it” is one thing. When we call art accessible, though, we tend to mean it in the pejorative. The accessible poem is one that offers up square and obvious content in a square and obvious manner. The right fear of banality is the better part of our flight from the accessible to the faux sophistication that Marjorie Perloff—and about a thousand other people—finds so objectionable in recent lyric poetry. These showier poems are often comprised, as Perloff puts it, of “prose syntax with lots of prepositional and parenthetical phrases, laced with graphic imagery or even extravagant metaphor (the sign of ‘poeticity’).” Though we should question any wholesale generalization, I think the poems she’s referring to are also those that dabble in nonlinear narrativity, suffer bouts of ungrammatical fragmentation, and meander into meta-poetic self-reference, but they only ever dip a toe in the depths of formal experimentalism before recoiling back into the allegedly safe dinghy of lyric expression. These poems attempt to establish countervailing force between their square content (confession) and their hip gesture (postmodernity!) so that, though the poem can be gotten, “getting it” seems like a workout—the poem as yoga pose, the poet as pretzeled instructor—which makes the entire enterprise feel somehow more credible. At least we’re trying, pleads the form. Not very hard, concedes the content.

It’s here the bayonet tip of the avant-garde arrives to skewer the false consciousness of the sappy, self-important lyric poem. The Conceptualists—even the ones who went to Harvard—want no part of that bourgeois noise. They wield formal experiment and abstraction against subjective expression in hopes of destabilizing the foundation of subjectivity: received language and the classism, racism, sexism, and homophobia implicit in that language. Conceptualists might agree that all poetry is political—“To mark the paper [is] the decisive act”—but if you really want to bring down the Thought Police, you can’t do it in grammars of the police code. This is what Alain Badiou’s getting at when he advises, “It is better to do nothing than to contribute to the invention of formal ways of rendering visible that which Empire already recognizes as existent.” Easy for Alain to say. He has tenure. Still, I think I mostly agree with him, but in the worthy effort to bring down the hegemons, the subversions assembled in the Conceptual wing of the poetry factory tend to abolish a poem’s capacity to take on overt subject matter overtly. “The poem’s about paranoia, jingoism, and the rise of the police state,” I say, but it’s comprised of disjunctive imagery, appropriated text, and shards of language strewn across the page. “Let the reader sort it out,” I say, but when the reader turns up shrugging, it’s left to somebody else to sort it out on the reader’s behalf, and this is my trouble with this version of the avant-garde.

The Conceptualist overthrow of accessibility installs, not the reader, but the academic in an outsized office. The good intentions of the Revolution beget the oppressive regime of the critic, which leaves all us would-be avant-gardists writing the poem as if it’s a fruit basket for Harold Bloom. No, my well-read neighbor has no idea what I’m getting at, but Helen Vendler might? My other trouble is that I don’t enjoy the fractured, abstract poems our formal hell-raising produces as much as I do the voice-y, lyric ones—David Berman over George Oppen—and maybe it’s just a matter of taste, but Perloff makes a metric of it when she says, “Today’s poetry establishment—Robert Pinsky and Robert Hass, Louise Glück and Mark Strand, all of them former poets laureate—command a polite respect but hardly the enthusiasm and excitement that greeted and continue to greet such counterparts of the previous generation as O’Hara.” Funny I haven’t noticed anybody tossing their skivvies at Rae Armantrout or Michael Palmer either. Maybe any comparison to O’Hara is measuring against redwoods, or maybe it’s that he’s the only one of the bunch with a sense of humor.

Complaints aside, I’ll readily acknowledge that one or another of my poems has attempted every tactic catalogued here. I wrote most of my first book in the aesthetically leftist Conceptual manner (I thought I did anyway). I’ve stated the obvious obviously and—sorry, Marjorie—trafficked, too, in the docile experimentalism of the epiphanic lyric poem. I think I’m doing something different now, but in each case, I wrote the poem because I couldn’t not write it. I wrote it because of all of the poems I’d read and adored and wanted to steal, but I don’t remember ever sitting down and saying, I’ll proceed now in the manner of a Black Mountaineer! or, Herein begins my turn to the Fabulist Neo-lyrical… That’s somebody else’s Poetry War. As far as I’m concerned, it’s better to do nothing than to contribute to the invention of formal ways of rendering visible that which the critic already recognizes as existent.

I prefer writing without so much self-consciousness. I prefer an avant-garde not defined by any particular gesture, school, or movement. I’d rather the avant-garde remain a sensibility, its only mandate to make no move that’s been made already. If this sounds near to Ezra Pound’s “Make it New,” it’s because Pound probably had it right. Filling his prescription, however, depends on what your definition of ‘it’ is. If ‘it’ = ‘epiphany,’ we eventually arrive at lyric-narrative poems that try so hard for any kind of revelation, they become defunct and bombastic as scripture. If ‘it’ = ‘form,’ then the pursuit of the new eventually necessitates apes and algorithms at the keyboard because there’s no formal subversion greater than the one that brings down the entire self-important edifice of the human intellect.

When I say “make it new,” I mean only to make a new arrangement of words, to marry dictions that don’t ordinarily go together. This doesn’t preclude writing a complete sentence—even a narrative one—but it does require every kind of language: the personal, the social, and the political, the serious and the frivolous, mother tongue and other tongues. It requires the default language of the self subverted by the language of everything else, and it’s a version of subversion that permits me to forget about tenure and The Norton, to forget the categories of the critic and the serious question of who might sleep with me and when. It’s an avant-garde mandate that makes the practice of writing entertaining, and if writing isn’t fun, well, bottle rockets.

As to the question of audience, let’s not be daft. The audience isn’t reading the poems to understand me in the first place. The audience reads to feel understood. For that, sex or a bonfire or rum cake with a confidant would be better. But I’ll offer the poem too, just in case.