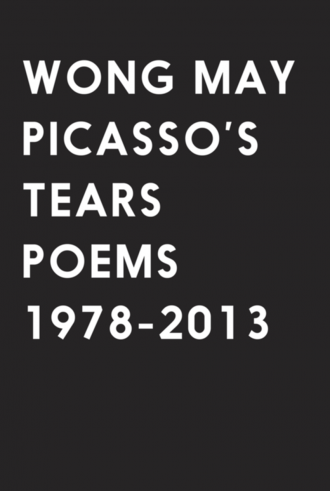 In 1973, just before his death, Picasso declared, “We must be like Ingres…,” and, in the 18th century, Ingres wrote, “Drawing is ⅞ of what makes up painting.” We must be fractional. Tomorrow, I believe, will be a number and, yesterday? Another 1. One should never stop trying to interpret and translate one’s disordered surroundings of gaps and gashes. “Wound culture,” as Johannes Göransson might call it. I believe one’s desire for a feeling of wholeness will never be satisfied. We must be unfinished.

Maybe this is why I have found myself completely floored by May’s reverse-sculptural autopsy-like analyses of our world’s history of murder and suffering. How notions of American are attached to violence. How notions of unAmerican are attached to violence. And I write “reverse-sculptural” only because this book felt more like a stripping away of material. A list keeping tally of the headless and the heads. A scrapbook of endless newspaper headlines. An accumulation of numbers and limbs. Creating, simultaneously, a feeling of fullness and a feeling of emptiness. A vacuole, or a vacuoleness. Containing waste and exporting waste.

When navigating the violence and the verve of quick-changing (“What was / I  wearing ? / Remind  me”) poet Wong May’s Picasso’s Tears, it’s admittedly difficult not to immediately think of Picasso himself: historically joined at the hip by his perplexing, tumoring gestures of bullfight, of Minotaur (“Spanish for light-bulb / Is Bombila / Which also means Bomb”); war-horsing into a quixotic music hall fit for Marinetti (“Beauty de-capitates”); consistently heavy basslines bayoneting forward and backwards (“!Blind! / Between the fingers / Now / !JAB!”); stressed and distressed figures of chaos gradually materializing and dissolving again (“2 young women  lighting up in dark / &  it isn’t by any wall. / It is under no tree”). It’s rather difficult to ignore all of these things when attempting to read this stunning, subtly crafted violence-cum-modicum cubist structuring of a hydra-like, Guernica-like language. A language of “deafening geography,” of geometric intersecting planes, of knife-game !JAB!ing, of gamey blossoms, of disembodied limbs, of non-taste, of torn-off faces, of decapitated heads:

Tears only begin  on the face of the 3rd)

Making in all 24 heads of suffering women

also “The Dream & Lies of Franco”

—‘head of a deific androcephalous bull’

‘Mother with dead child on a ladder’ (8 versions)

—‘reconstructive exploration of the bull’s head’

& ‘future inventions of the eye’

Picasso’s Tears is no mere ‘Dear Pablo Picasso…’. It’s 35 years in the making. It’s 64 poems and it’s 326 pages long. Its Steinian, museum wall-sized poem-finale, “The Making of Guernica,” opens with the question, “& Where have we met,  Guernica?,” and like a torturous outpour of noise from a throat decorated in horror vacui, May suddenly begins spewing line after line onto page after page concerned for xenophobic America and its many-layered commercial gallery culture of well-sculpted characters and professional lies. Its culture of work-in-progress ‘terror’. Its Hollywood B-movie bloody nationalism (“What you have shown on the screen / Is all painted / Is all faked blood”). Scenes from the recent Boston Marathon bombings of 2013 are juxtaposed against the destruction of a wartime Spain-anatomy explicitly reminiscent of Picasso’s Guernica. The reader is forced to make sense of the montage of beheadings, hard-lined bulbous unfoldings of wound and fallen horse-bodies, and the Tsarnaev brothers.

May’s primary emphasis appears to be not on the gunshot-wounded Tsarnaev brother himself, but the drawbacks of the ‘naturalization’ process. The ‘naturalized’ as threatened by future disenfranchisement via popularized images of ‘terror’. This sort of thing still happens every day. Take for instance this very recent CNN article, in which the “Somali descent” of three “American teenagers” is undeniably stressed. The silencing treatment and attempted erasure of lineages concerning bodies that do currently exist in the United States continues with each passing day:

Shot in the throat

Is certain to  face death penalty

Whether he talks or not

Additionally, I think it would be a severe error to interpret the poem as praising the Boston Marathon bombings. I see the poem as May’s way of trying to make sense out of the disorder and violence that continues to exist in America. Her lines are challenging and complex, often saying many things and offering many viewpoints all at once. A bewildered Yeats once told Pound, “I have spent the whole of my life trying to get rid of rhetoric . . . I have got rid of one kind of rhetoric and have merely set up another.” (I think it goes without saying that rhetoric and poetry can certainly have shared interests.)

During the construction of The Cantos, Pound arrived at a similar impasse when he famously announced in CXVI: “I cannot make it cohere.” In Picasso’s Tears, May eventually confronts a “Zachary” who one assumes to be Octopus Books publisher—Zachary Schomburg—via “de-lete” thoughts or actions seemingly replete with hesitation and/or uncertainty regarding “The Making of Guernica” poem. For May, this zone, this warehouse—this garden shed—becomes, at times, a zone of impasse and, due to fears of things not precisely cohering, the same shed becomes a codified and codifying place of extravagance (“Scissoring, unhinged / the nose an elbow, thumbs / thumbs the 3th head / For tongue , dial 5, please hold”), of superimposition (“t(ears) migrated , pre-war”), of shedding (“Face ripped / like a phone / Off the wall”). Baroque in its excess of chandeliered faces, ear-obstructing matter, in-grown hairs, and its intentional and enticing collage-like wastefulness of perilous tears and plot-obscuring tears and even “botanical” tears one could surely drown by, May voyages from page to page in her own sorrowful Periodo Azul of terror and error. All while simultaneously maintaining a complicated critical distance away from and attachment to—not the country she was born in—but possibly, a country she desperately wishes she knew how to save:

America I have always defended you

I said no-one has the right to excoriate America

Unless they love America,

When asked from which country you are an exile

This review doesn’t even scratch the surface of this overwhelming, beautifully bound new title from Octopus Books. (It looks rather handsome alongside other museum-style books, no?!) Excessive, but never negligible, the intriguingly circuitous and protean poems of Wong May will surely evoke a variety of responses from readers. Answers will temporarily skyscraper from out of numerous questions. Time will pass. Ruins. Skyscrapers. Ruins. Whether it’s when the poems demonstrate the exhilarating imagination of Apollinaire in pieces like “Mozart” and “Fragment,” or, when things become more explicitly political in pieces like “Sleeping with Tomatoes,” in which Chinese identity and the oxygen-depriving deportation of bodies is addressed, May’s poems are disastrously alluring. Intoxicating. These poems are what’s on TV and what’s not. These poems are peepholes and acts of defiance. A pre-war, post-war stairwell of a book—where bodies of various backgrounds and religious backgrounds, descend and ascend; sadly come and go.

In Aesthetic Theory, Adorno writes, “If art is to remain faithful to its concept it must pass over into anti-art, or it must develop a sense of self-doubt that is born of the moral gap between its continued existence and mankind’s catastrophes, past and future.” I desire a state of existence beyond notions of (frequently jingoistic) moralism. Like, the speaker of May’s poems, I sit around wondering about the kinds of games a God might play. I sit down at a table like Dora Maar, and gleefully !STAB! around at the blinding brightness of everyday, continuous, bar-codified humankind. I sit down and play a game with my body. I hope the spaces between my fingers are wide enough. “I sometimes think of you / Body / My body / I know what’s going to / Happen to you. / But you don’t.”