A Quarter Gave Me New Life 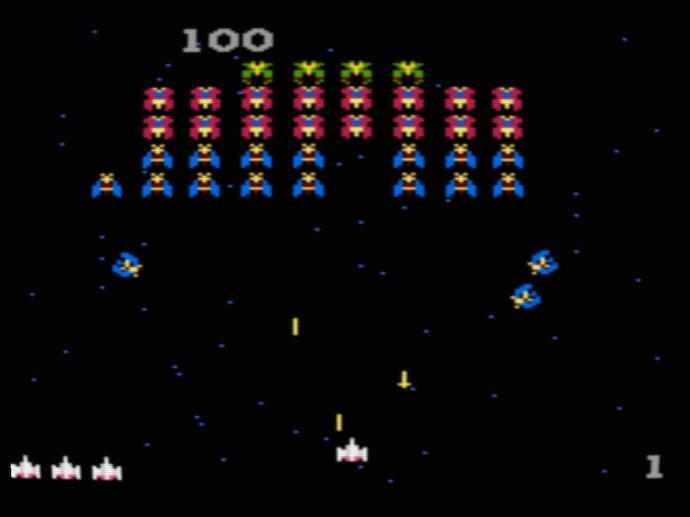 Before Galaga was my game, Galaxian was my game. Galaxian is no longer my game and I hadn’t even seen an original machine for more than two decades until I recently spotted one just inside the Papaya King on St. Mark’s Place in NYC. But Galaxian was the first arcade game where I could get the high score, and I was addicted to it for a couple of years.

Galaxian is a space shooter that was designed to be an update of Space Invaders. The deep space had colored stars and planets scrolling by instead of a simple black background. Galaxian’s screen was filled with an alien armada, just like Space Invaders, but now it was in color. Galaxian was the first game with true RGB color graphics instead of transparencies. Galaxian was also the first space shooter where the aliens had distinct personalities—the blue, red, purple, and yellow Galaxians each having their own type of flight pattern. There were no green barriers to hide behind in Galaxian, which made the gameplay more difficult. And instead of hunching back and forth in their trooplines, the Galaxian aliens would jump out of the formation, out of the troop lines, and dive-bomb the player’s fighter. By today’s standards, the game is pretty slow—the fighter only shoots one bullet at a time. Each wave of aliens gets successively faster, to a point, after which it doesn’t get any faster. As the levels progress, Galaxian and Space Invaders become so fast they are basically unplayable.

Once, on a Sunday afternoon, my dad decided to come to the mall with my mother, my sister, and me. It wasn’t something that he normally did, usually preferring to stay in bed and doze all afternoon with the newspaper. It felt awkward to have him with us and I didn’t know if we were supposed to behave differently. At the mall, I was told to meet them at the fountain at 5:00 pm and I split off from the rest of my family as soon as I could. I walked as quickly as I could to Aladdin’s Castle, exchanged my money for tokens, went directly to the Galaxian machine, and put my token on the lip of the machine to claim the next game. I don’t know how many games of Galaxian I played that day, but eventually I was down to my last token and I started my last game. I thought I had plenty of time to finish the game and meet my family at the fountain, but something happened as I played my last game of Galaxian that day, and I had a breakthrough. I never got trapped under the sweep of attacking Galaxians that criss-crossed the screen. My fighter flowed back and forth across the grain of the bullets raining down. I shot the alien invaders at the last second, a series of quick shots allowing me to escape left or right. I split the staggered bullets as they blanketed the screen from left to right and then right to left. I was in some crazy Galaxian flow and it felt awesome.

That Sunday afternoon, I didn’t stop playing when my sister came into the arcade and told me it was time to go. I didn’t stop playing when she came in a second time either. Then my dad came in and told me it was time to go. While I kept playing, I explained that I was working on the high score—and not just the high score for the machine that day, but my all-time high score. Of course, my dad didn’t understand what a rare event this was. He told me it was time to go, but I kept playing even though I knew it would lead to physical pain. He jostled my arm, which was a super-dickish thing to do to somebody playing a video game, and almost caused me to lose a fighter. I gave him a quick angry look, and then my dad placed his hand on my shoulder near my neck—in a way that could have looked loving in a fatherly way—and he squeezed really hard with just a finger and thumb (his version of the Vulcan death grip). My whole body seized up and my fat dad pulled my mostly limp body away from the Galaxian machine, out of the arcade, and out into the bright light of the Lansing Mall.

I will still flinch if you try to touch my shoulder, neck, or head. I will pull my arm back if you touch my arm and I’m not expecting it. I have a physical startle response and will for the rest of my life. It’s not the best way to go through life, but I have adapted. I’ve grown into my body and I don’t have the same physical fears as I did growing up. I’m 6’2’’ and a solid 190 pounds. I’m not that skinny little kid anymore. But I’m still happiest and most engaged when I’m playing video games (or playing sports or gambling). It’s a rare kind of rush that I just don’t find in most parts of my life. To understand why playing video games is so important to me, you have to know this abuse history too.

As a boy, I did not want to live the life I had and playing almost any game allowed me to leave it. Video games were a new level of escape. Putting a quarter in any video game machine gave me a new life for as long as I could stay alive.