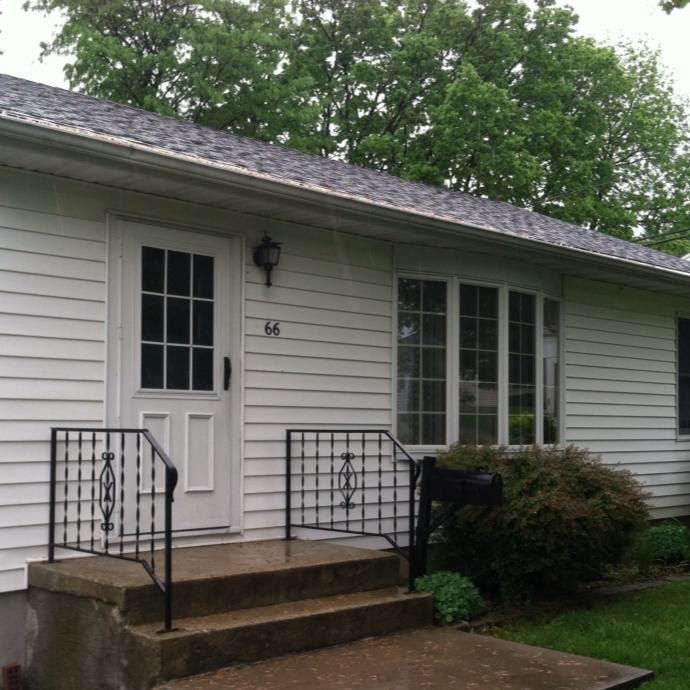 When I was little, I loved going to Decatur, Illinois where the older generations of my family still lived. There was a grandmotherly gentleness about the name itself: a place of catering, where you were taken care of. I remember all the landmarks on the road that led us to my Grandparents Delaney, all the signs that we were almost there: the Perkin’s, then the hospital, the small new-build apartment with the columns. As a child, I thought, that must be some rich person’s home.

The house belonging to my Grandparents Delaney, marked by its address in cursive letters: 66 Maple Court.

The small tan strip of driveway.

And I remember it so well, it aches, the series of small movements and their smells, every time you went into that house: the grate door, then the wood door, the eternal Folgers brewing, then some other smell, some airiness that’s harder to describe.

It was the smell of every other Irish Catholic house I worked in on my brief stint as an in-home CNA, a job I had to take—for money—and I had to quit—for money—when I learned I only made $4.50 an hour.

My grandmother: her mists of hair in seafoam plastic curlers.

My grandfather: a warm man with a flat corduroy cap.

My parents: two young people who were growing up, just starting out.

And me: the little girl they started out with.

We’d have chicken with noodles, or white halibut with slivered almonds, and an orange jello mold with skinny carrot shreds, and off-brand sodas from their own refrigerator in the basement—filled with sodas!—Diet Rite, in shades of Diet Raspberry and Diet Lemon-Lime.

Then, we would take what used to feel like a long walk through the neighborhood, a circle I now recognize as strategy. Hello, hello, my grandmother would wave to all the circle houses, in a way that made them feel so safe and never-ending.

My grandmother once said she’d go for long walks to cool down whenever arguments inside her house grew heated. I did the same, in my first marriage: long walks, orbiting around my block, as though I could control time with my movements.

I never noticed how run-down the neighborhood was until I was twenty-six years-old and came to visit with my dog. He pulled me off the path, a block beyond the circle, and the homes around me suddenly looked very different.

And like the good girl that I wished I was, I felt ashamed.

I turned right back around, continued walking on the circle path.

Of course, the time came when my grandmother could no longer walk in her necessary orbit, in her necessary circle. That was around the time when I stopped visiting, when I’d get updates on Decatur through my mother through the phone.

She fell again: this time, a fracture in the bathtub.

She fell again: this time, a sprain on the porch steps.

She fell again: this time, a pair of broken glasses.

She fell again: this time, she forgot where she was.

I did as well, in just as many ways. And at the time, I needed to. My south side neighborhood was beautiful if you kept on a certain path, weaving away from certain streets, mostly the streets of what were once—and are still now, in some ways—stockyards.

And even if you got a little lost—ignored the streets, ignored the signs—there was the smell that said, distinctively, something is wrong. The veal packing plant that smelled like everything you might imagine it would smell like.

Dead skin. Pain. A red smell, hanging in the air.

But one day, I was angry from an argument, a bad one about money, the beginning of the end, when I look back, of course, now knowing just how dumb I was, how easy it seems, now, to look back on a path that you’ve been orbiting, around, and round, and round. But I was angry, and I wandered. I forgot where I was going. And I crossed that airy line that told me, yes, something is wrong, and I walked down the wrong road, deep into the wrong red smell, probably thinking all the wrong was right for how I felt.

And then, I saw what you have probably suspected I would see: brick walls, an open gate, and workers moving small among tall piles of pink—unrecognizable as bodies til the smell hit—horribly—and I knew what they were, and where I was.