You Got Somethin’ To Say?: A Review of Andrew Worthington’s Walls 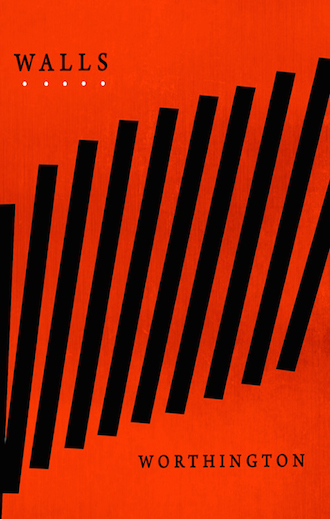 Banality steals your life one glance, one sound, one meal, one conversation at a time. It is everywhere and all you must do in order to be enveloped by it is slacken your will. The life of a thinking person is a constant battle to rise above the banality around them and their own potential to be a source of it. In other words, in a society with a landscape increasingly dominated by templates, in which social interactions are defined by conventions homogenized and disseminated by omnipresent media, for a thinking person in such a society, boredom is the default. Yet, taken individually, no single banal phenomenon is a serious thing, so it’s hard to criticize and hard to satire without seeming petty.             Illustrating the psychic affects of variety being gradually removed from our lives is a daunting task. Realistic realism, to put it one way, runs the risk of being too accurate, like wandering around your own life when you’d rather be reading a novel.

Yet in Walls, Andrew Worthington is able to build a haunting neurosis out of his protagonist’s generally quite normal if stunted experiences. By using a direct, rhythmic first-person narration he creates a pervasive atmosphere of compelling, almost enchanting bleakness. Outside of the occasional menacing hint of suppressed rage, Tom, the book’s narrator-protagonist is relatable, direct and deadpan, but he has a keen eye for observing the significance of the insignificant, pulling the curtain back to expose behaviors or phrases that linger unnoticed in our periphery, forcing us to acknowledge both their presence and import in our lives.

We sense Tom wants significance, maybe even redemption, but doesn’t know where to look for it. There are conversations about serious subjects but they mostly end up aborted because argument in this world lacks passion, is small talk in the guise of intellectual debate. The small talk in Walls gave me a sense of deja vu that affected the way I felt about overheard conversations for weeks.

“So did you like the show?” she said. I knew she was being sarcastic.

“Yeah, it was great,” I said. She knew I was being sarcastic.

“I’m kidding,” she said, even though she knew I had been kidding.

“Me too,” I said, even though I knew she had been kidding.

This sense of deja vu is all the more frightening when you’re not sure whether its source is what you’ve often heard – or what you’ve often said. What if not only your passions but even your words are rendered impotent and replaced by filler? Worthington forces his readers to take their conception of life in general and their own lives in particular out of the abstract and to ask themselves what real life is, really, and who they themselves are in day-to-day practice.

The book’s sexual and romantic scenes are some of the best. The first of these, “The Julia Page,” is tragicomic but leaves behind an aftertaste more of tragedy than comedy. An intensely personal note Tom writes about his first crush is systematically copied and distributed around his elementary school for a per-copy fee. Not only this, in order to mitigate the damage to his reputation, Tom helps his tormentors with the task, trying to seem as though he doesn’t consider it a big deal.

“Are you sure you won’t get in trouble?” asked John’s mom. We were huddled around his family’s computer.

“Yeah,” said John. He stopped typing and turned to her briefly. “He’s sitting right here. He’s fine with it, aren’t you Tom?”

This early scene shapes his psychology for us as someone doomed to have to shrug off the frustration of his yearnings.

An older Tom pursues dating and sex with a paradoxically passive doggedness, a quietly desperate attempt to get anything satisfying or meaningful out of an evening. He will take whatever the girl he is with will give him; sex is simply the final option available when conversation, alcohol, drugs, movies, music, etc. have run their course. But the first domino in these sometimes tawdry situations is usually a fairly innocent crush, maybe like the one he had had for Julia.

Sex is often our attempt to cut through the falseness of formalized human behavior and finally, after a long day of pretense, see someone losing control and become real. In this way, Tom becomes interested in a co-worker in spite of considering her fake. He wants to penetrate her facade–and to literally penetrate her might achieve this end. “I wanted to see her clench her teeth, and moan, no more facial expressions that over the years have become forced mechanical. I want it to hurt. I want to hurt her. I want her to like it.” The feelings expressed here are more cerebral than sexual; he is desiring authenticity, not domination.

Tom’s mindset sometimes reminded me of my own when scanning my life for artistic inspiration, desperately attempting to will it into being. I find the book almost Nietzchean in a derision that is ultimately not cynical; for those who find Nietzche cynical are missing the point–Nietzsche strove for happiness and satisfaction while preaching heroic greatness, but failed miserably insofar as his own life was concerned. I see a parallel existential striving in Worthington’s narrator, to highly memorable effect.