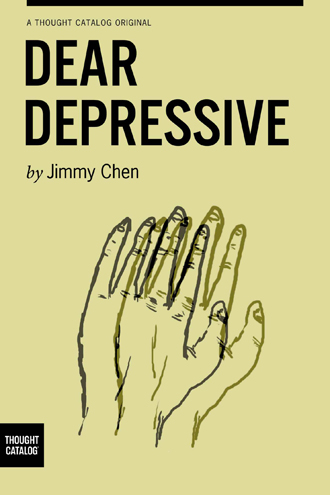 On January 27th, 2013, Thought Catalog published Dear Depressive, an eBook compiling questions and answers from Jimmy Chen’s Formspring account. Less than two months after this literary debut, Formspring announced that it would cease operations. All accounts would disappear by mid-April. (A recent deal appears to have saved the website, but who knows? From inception, every startup is embedded with its own destruction. The only known unknown is time.)

The website’s novelty lay in its ability to offer its users a system by which they could subject themselves to a torrent of questions posed by anonymous users. In addition to the obligatory chavs calling one another fat slags, the platform was appropriated by corporate and media folk as a means of demonstrating the awww, shucks, gee whiz anti-formalism that is the hallmark of present day infotainment capitalism. No longer enough for an entity to dominate the lives of its customer base, its constituent members must expiate their private guilt by demonstrating that they, like you, are on in the joke. That they, like you, can twerk out and Harlem Shake.

For several years, Chen’s longer form writing has appeared on Thought Catalog’s website and HTMLGiant. He has eschewed, generally, the tactics of his compatriots, choosing instead a tongue-in-cheek haute intellectualism slightly out of step with a milieu focused on kitschy heteronormative gender roles fueled by the constant rediscovery of long discarded banalities. In some respects, this approach has drawn unwelcome attention: about a year ago, Chen ran the baseless reputation as HTMLGiant’s resident misogynist, which is a little like being renowned as that one Ottoman Turk who’s totally shit with Armenians.

On Formspring, Chen adopted the role of an advice columnist, soliciting questions both sincere and otherwise. He wasn’t the only user doling out wisdom, but the questions being asked displayed a notable range, from dull witted scatology to seemingly sincere cris de couer. Often simultaneously.

A random selection of questions answered within Dear Depressive:

“If a guy doesn’t pay for the first date even though it hasn’t really been established as a date does it mean he just doesn’t like me that much?”

“What the fuck happened to Fiona Apple’s face?”

“I’m an 18-year-old sophomore in college. I have a deep ache, a throbbing pang, in my chest that comes from my desire to love someone and be in a relationship. There was this one guy I approached but he rejected me.”

“How does one even own anything?”

Taken in the aggregate, the queries biopsy a certain post-suburban angst, the supposed emptiness of the new millennium. That the questioners considered Chen a viable source of advice, and that they continued to ask over an extended duration, speaks towards both his literary persona and the way that the appearance of truth-telling has, at this late date, been intertwined with the presumption of human debasement.

A: i think about a hooker’s herpes sore covered up in foundation, her pubic razor burn tentatively alleviated with walgreens-brand baby lotion, a handful of crumbled $20s on the counter soaked in gin, the TVs antarctic light summoning the shadows of our limps as mutant shadow puppets on the walls, the hollow wail into a condom, his progeny condemned, her rent made, begging her to sleep over, her face losing its youth, a baby crow’s feet growing up, black painted eyes now marking the pillowcase with J.W. Turner-esque smudges, as if some war torn sky set aflame were being painted, years ago and far away, when it took ships and slaves to carry me to you”

Say what you will about that other J.C., but he was awfully good on redemption, and there are a great number of people for whom the dialogue of our moment remains inadequate at offering anything like grace. Have some pity on those psychological types who should’ve been born three hundred years earlier into a world where the idea of God retained a modicum of validity, where moral and ethical demarcations were tied to a system of hope and damnation, of suffering and its rewards. (Flash Fact: not everyone can will themselves through eternal recurrence and Spring Breakers.)

Stuffed past bursting with neoliberalist individualities and forced to use a polyglot comprised of faux hip hop slang and marketing signifiers, some sorry sots ooze all the guilt and shame and depression of bygone days whilst living without social access to mechanisms of alleviation. In what direction, then, do they turn?

There is a school of thought which suggests that if one self-subjects to the world’s humiliations, then one will never be humiliated by others. And a person can always buy their way in. Issues of price are surmountable. Anything can be a currency. Your body, your money, your soul. The basic function of every purchase is the false hope of a new community, of a new experience, of a new thing, of a new self. The delusion can be maintained as long as you speak the common tongue.

Consumerist stratagems, emulating the acquisitory nature of the surrounding society as a form of inchoate subversion of social norms, functioned as a method of social demarcation until it turned out that Republicans evidence no particular distaste for shooting smack or hooking up, blurring the lines between them and you, me and them, him and her, me and you, she and thee. It’s a lesson you can learn hanging around the Sunday pool party at the Hard Rock Café and Casino, watching the apolitical flesh in motion, a ballet of body modification and human growth hormones. America is your creepy uncle and he’s throwing one hella rager and his bro is bringing all the best drugs and everyone is invited and Neil Gaiman is DJing a set right after Steve Aoki.

When you’ve become everything that you hate, when this one married woman won’t stop giggling over aperitifs about her youthful lesbian dalliance, when your ex keeps texting about Ice Road Truckers, when the person who spent all night yelling “YOLO” calls in the morning begging for hangover remedies and an excess of tissue paper, when sisters tear other sisters down, and when the buildings blocks of rhetoric are constructed to keep you from any positive expression of your own experiences, then one begins to see the appeal in conflating misery with truth, of collapsing emptiness into all things.

But every nihilist is only a sentimentalist in drag. Despite Chen’s unparalleled ability to summon up the swirling eyes of an Oxy addict being diddled in the backroom of a strip mall swinger’s club, the giving of advice is as much a human need as asking for another’s counsel, and writing well means that it all comes out even when you’re holding back, and Chen can write extraordinarily well.

A: “Mutual crushes” feels like a paradox since crush implies some form of unrequited conviction while mutual implies the logical resolve of said crush; so yes, you two lovebirds are indeed in “weird places,” which is what self-absorbed white people love saying to further the sprawling conversation about themselves. Fucking love, get loved, and live. The only “weird places” you need to be concerned about are Pakistan and Utah.

It’s plausible that Chen’s eBook will, in some future moment, be the only relic of a digital experience that served ten million active users. What to make of Dear Depressive now that its origin point is imperiled and soon to evanesce?

Arguments abound. The perishable nature of digital output. (Yawn.) The broader implications: if Formspring can go, can’t Dear Depressive itself and everything else, too? (Gag.) Post-existential concerns: does the experience of millions have more or less meaning, if any, when occurring on an unstable platform subject to the whims of the market? (Worth further exploration.)

But perhaps it’s best to read Dear Depressive like a parable about the loss of authorial control, and about the ability of greater events to impact the meaning of a text, a scale model for the greater chaos in which we find ourselves.

Import, when subsequently accrued to an aesthetic effort by virtue of exterior events, is easy to understand. Which is rather different than the incoherent striving of our lives.